A growing number of top 100 retailers including Walgreens, Costco, Target, Whole Foods, 7-Eleven and more have partnered with startups Postmates, DoorDash, and Instacart.

Since 2010, investors have plowed over $9B into the on-demand economy, which includes delivery startups like Postmates, Doordash, and Instacart.

Now, a bevy of the US market’s biggest retail chains by revenue are partnering with these startups to offer delivery at the push of a button.

This month, both Walgreens and Target announced separate partnerships with Postmates and Instacart. Walgreens tapped Postmates for goods and pharmacy medication delivery from 600 Walgreens and Duane Reade stores throughout the country. Target, now Instacart’s second-largest partner after Costco by revenue, is testing Instacart for home deliveries in the Twin Cities.

To get a sense of the wave of partnerships signed over the last year, we mapped out the partnerships signed by the top 100 retailers with three of the biggest consumer startups in the on-demand delivery space — Instacart, Postmates, and Doordash. The three companies are valued, in aggregate, at $3.1B. A chart of top 100 retailers by 2014 retail sales is below (click to expand).

Of note, 11 of the top 100 retailers or one of their units have disclosed a partnership deal with one of the three startups (highlighted in orange above). The increase in partnerships comes as the elephant in the room, Uber, is reportedly slated to unveil its own set of on-demand retail delivery partnerships while Google Express is also set to start testing fresh food and grocery delivery.

Separately, same-day delivery B2B services startups such as Dropoff and Deliv are also operating in this space. Deliv has signed contracts with Macy’s, Foot Locker, and Williams-Sonoma, among others.

The graphic below, made with CB Insights’ Business Social Graph tool that maps relationships between investors, partners, acquirers and companies, highlights the growing group of big-box retailers partnered with on-demand consumer delivery apps. 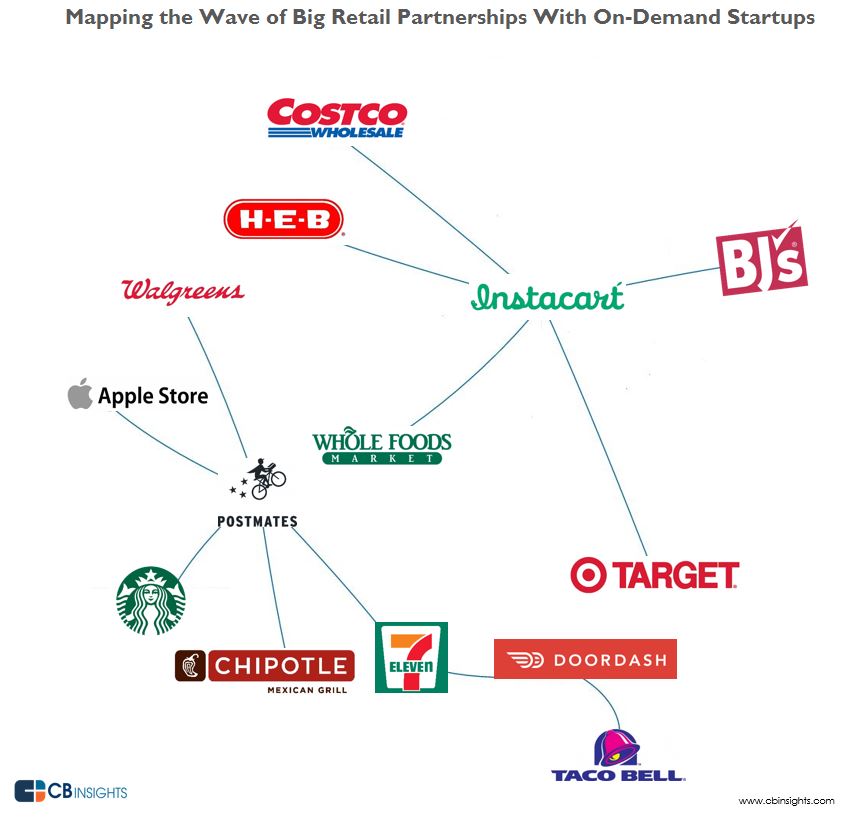 See how the Instacart and Whole Foods partnership evolved over time in the Rise of On-Demand Economy webinar. Looking for more on-demand startup financing, exit and performance data? Sign up for the CB Insights Venture Capital Database free below.