Europe’s tech scene is booming to the tune of $5.7B in funding in 2014 up 78% YoY. With the funding and deal momentum, we looked at the pace at which early-stage startups were raising money between rounds, specifically from Seed to A and from A to B. 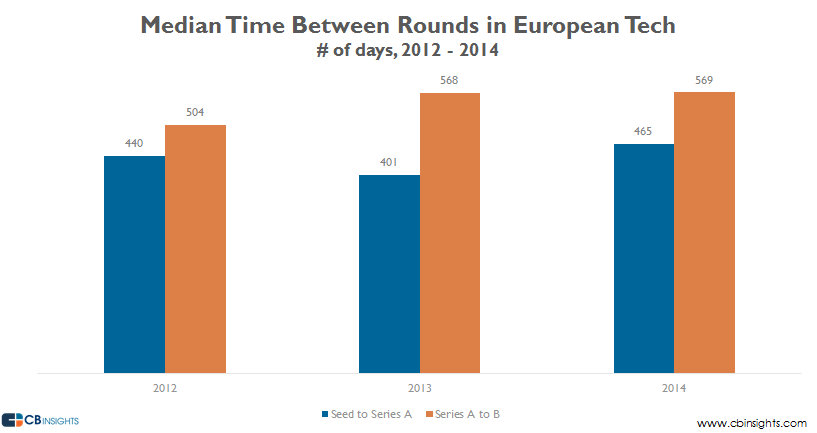 One quick way to see if a company has momentum is to see if they’re Financing Velocity is high – in other words, were they able to quickly raise their next round of financing? The logic, of course, being that hot companies raise rounds quickly because investors want in on them as the result of traction (user/customer growth, revenues, etc).

Specifically we looked at companies which most quickly raised a Series A round after their seed round in Europe. The fast-raising companies include Azimo, a company disrupting Western Union and the remittances space, as well as BAT Household Services, a German version of TaskRabbit and Homejoy, which raised a $5M Series A less than 6 months after their Seed round.

In addition to looking at fast-raising Series A stage companies, we also looked at the Series B stage companies who made the leap from A to B quickest since 2014. This includes Netherlands-based payments company Adyen, which raised a massive $250M Series B round from Felicis Ventures, General Atlantic, Index Ventures and Temasek Holdings, as well as AirBnB alternative, Homestay Technologies. In fact, of the 10 companies, 4 have similar business models to successful US companies including Cabify (Uber/Lyft alternative), Deliveroo (Postmates), and Helpling (Handybook/Homejoy), in addition to Homestay.

Want more data around Europe’s hottest tech startups? Login to CB Insights or sign up for free below.