China tops the US as home to the most private e-commerce companies with funding over $100M.

E-commerce is one of the most well-established and well-funded categories within tech. Between 2012 and 2016, private e-commerce companies raised over $46.7B across 3,880 deals. Notably, while the US is often the top hub for various categories within tech, China takes the top spot over the US as the country with the largest number of e-commerce companies with $100M+ in funding.

Our analysis only includes current private and active e-commerce companies that have received funding within the last 2 years. We have also incorporated companies that are spinoffs and joint ventures into our analysis. Specifically, we included India-based Paytm E-Commerce, which is a spinoff of Indian mobile internet company One97 Communications. We also included China-based Koubei, a joint venture between Alibaba Group and Ant Financial Services Group that received over $1B in private equity funding in January.

We define the e-commerce category as internet and mobile companies that sell physical goods, not including perishable food or services. Our list of companies also includes companies within e-commerce enablement (i.e. companies designed to help optimize e-commerce companies).

Global map of e-commerce companies with $100M+ in funding

China places first with 25 e-commerce companies with funding over $100M. Some of the most well-funded companies within China include discount platform giant China Internet Plus (Meituan-Dianping), formed by the merger of Meituan and Dianping, with $3.3B in funding. Another top player in China is electronics micro-lender Qudian, formerly Qufenqi, which has raised more than $960M in funding. Most recently, the company raised $449M in a Series F round from investors such as Kunlun Worldwide and Beijing Phoenix Wealth Holding Group in Q3’16. China is also home to a number of used car platforms, including Uxin Pai, Souche Holdings, and RenRenChe; 8 of the 25 Chinese companies featured on our map are in the used-car space.

The US ranks second in the world for e-commerce companies with $100M+ in funding. The most well-funded companies in the US include online car-vending platform Carvana, and online shopping platform Wish, which have raised $935M and $719M, respectively, far less than some of their Chinese counterparts.

India ranks second within Asia and third in the world, with 10 e-commerce companies with $100M+ in funding. At the top of the Indian market are Flipkart and Snapdeal, with $4.65B and $1.76B in funding, respectively. Most recently, Flipkart received $1.4B from eBay, Tencent Holdings, and Microsoft on 3/20/17. As part of the deal, eBay India came under the control of Flipkart. 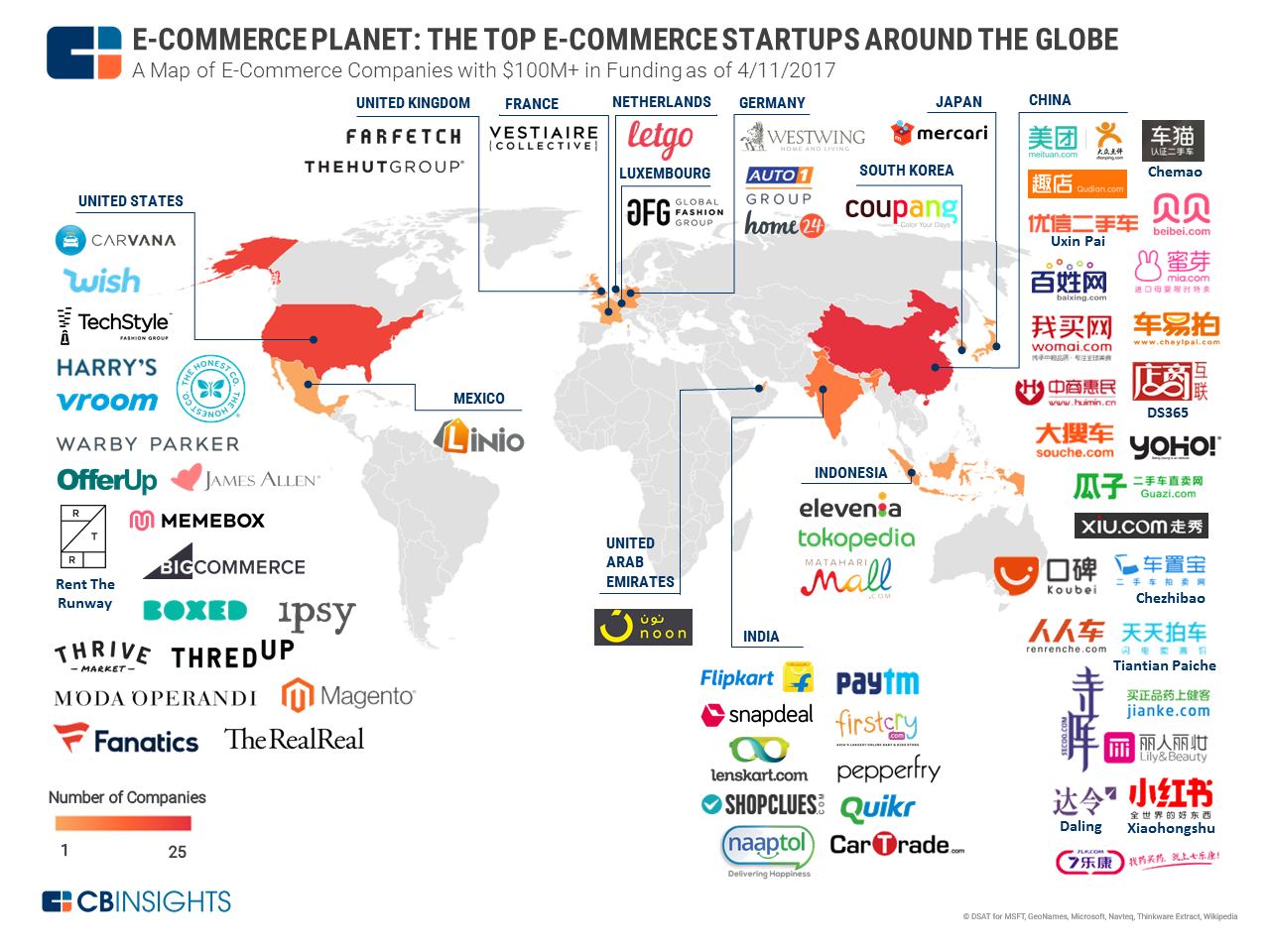 Even though several companies have managed to raise $1B plus in funding, e-commerce companies have also experienced downrounds and down exits in their struggle to survive amidst tough competition and operational challenges. Flipkart’s recent financing of $1.4B (mentioned above) was actually a downround in which the startup’s value fell to $11.6B (down from $16B in 2015). Luxembourg-based Global Fashion Group experienced a downround in 2016 in which its value fell from $3.43B to $1.1B. Moreover, Dubai-based Souq.com experienced a down exit in Q1’17 in which the company was acquired by Amazon for several hundred million less than its original $1B valuation. All downrounds can be tracked in the CB Insights Downround Tracker.

In the face of such challenges, consolidation in the form of mergers and acquisitions has become a common theme for e-commerce startups that are able to exit. Although Brazil-based online sporting goods retailer Netshoes recently went public on 4/12/17, there have also been a number of high-profile acquisitions in recent years, including those of Jet.com (bought by Walmart) and Dollar Shave Club (bought by Unilever) in the US, Souq.com in the Middle East (mentioned above), and Lazada in Singapore (controlling stake by Alibaba Group). E-commerce startups that are struggling against larger competitors such as Amazon may hope to be scooped up in similar M&A deals. Most recently, Softbank Group (investor in Snapdeal) has reportedly been pushing for a merger between Snapdeal and Flipkart, in an effort to combine resources and compete against Amazon in India. 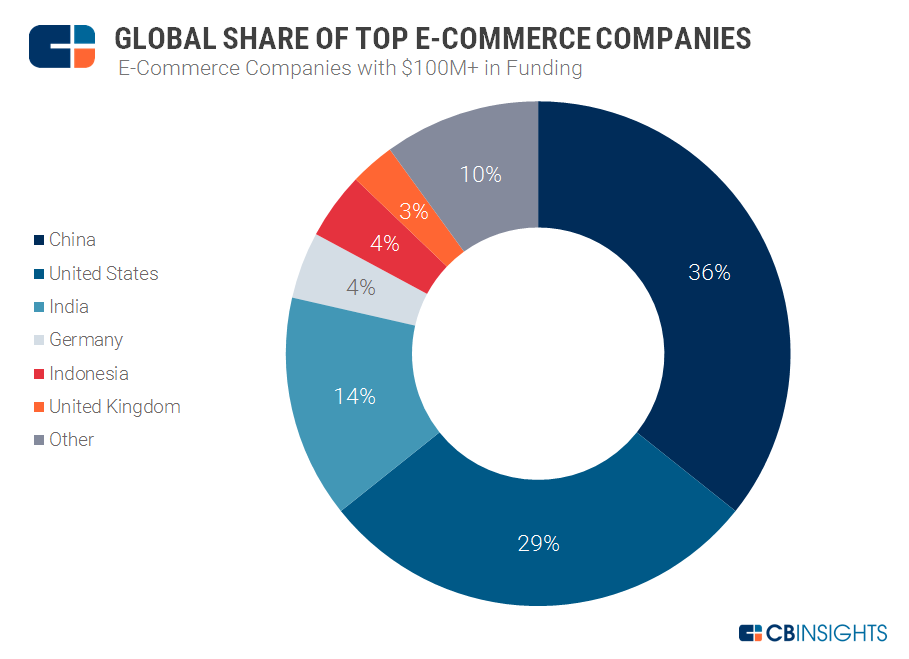 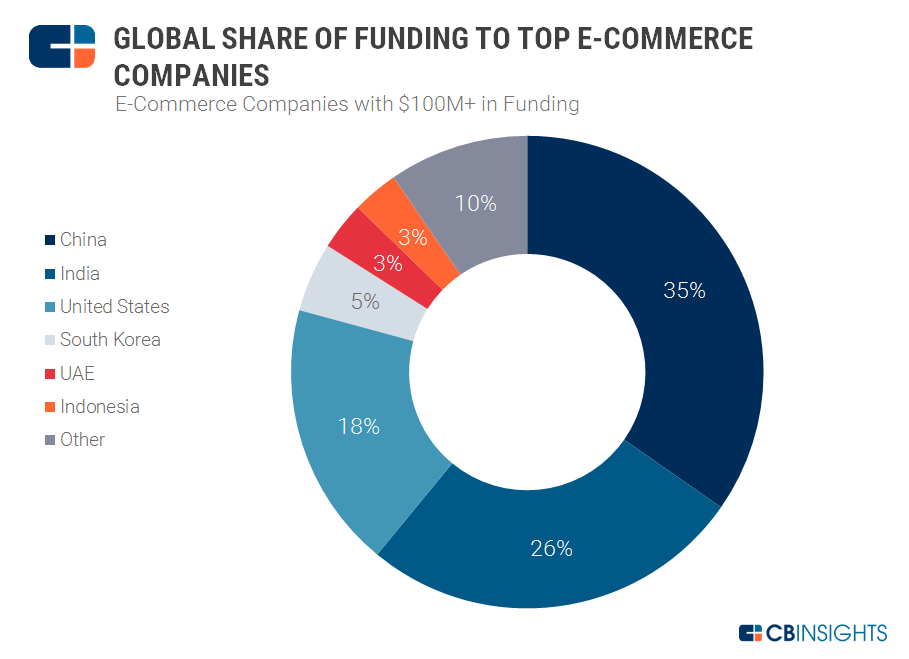 Want more data on e-commerce companies? Log in to CB Insights or sign up for free below.