Research Brief
2984
A look at the fundraising success of the 10 most active accelerator programs in the US.

Given the relatively small amount of capital needed to start a company within the technology sector today, we have experienced a wave of companies launched by freshman founders. Coinciding with this increase of novice founders has been the exponential growth in the number of global accelerators seeking to support these founding teams during the early stages of formation.

Most accelerators offer cohort-based structures, such as mentorship, and a network, and often a small capital investment in exchange for equity. As most accelerators take meaningful ownership stake in a company, typically 5% to 7% percent, the cost of joining an accelerator can be high.

A key driver for determining whether to join a program should be how helpful the accelerator is in making a company “fundable.” Testing this by assessing the fundraising success of companies in a given accelerator.

To help provide a basic benchmark, we reviewed 10 of the most active accelerator programs in the U.S., according to CB Insights, based on the funding history of cohort companies.

Table One: Companies that raised at least $750,000 post-accelerator within 12 months

In the first table, the following parameters were used: 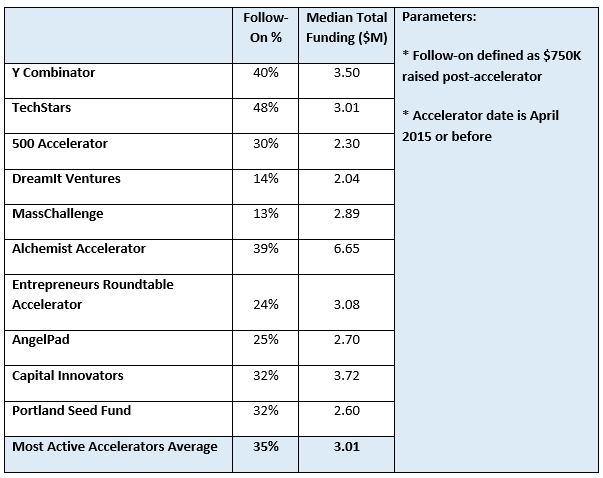 Although capital efficiency exists at the earliest stages of company formation, substantial capital is required for scale, thus necessitating institutional venture backing. In table two, an additional filter of institutional capital was included, meaning that at least one venture capital firm had to participate in a future round in order for the company to be considered as having raised follow-on financing. 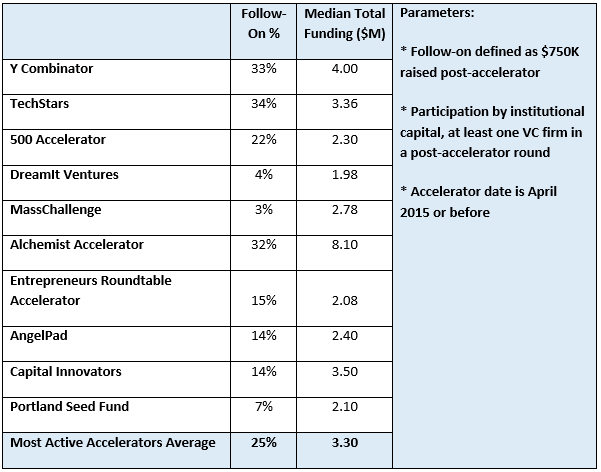 The numbers aren’t altogether surprising, with Y Combinator, Techstars, and 500 Startups playing prominent roles. But here are some of our observations around the data:

While the follow-on numbers may appear low for these accelerators, we think a few variables are at work.

While some may be surprised that companies coming out of the enterprise-focused Alchemist accelerator have received higher median funding amounts than Y Combinator, that’s easily explained by the delta in cohort sizes: Alchemist limits to 17 companies while Y Combinator has cohorts that often exceed 120 companies.

Additionally, we used statistical median versus mean in our analysis, as heavy skew would present for Y Combinator, from unicorn companies such as Dropbox, Airbnb, and Instacart. When conducting a baseline analysis, it’s important to take into account cohort sizes and sector focus of the accelerator.

Significant geographical advantages appear for accelerators located in major tech centers when testing for probability of cohort companies receiving venture funding. To note, Portland Seed Fund and Capital Innovators saw their follow-on rates drop by 400 percent and 200 percent, respectively, when the filter of institutional capital was applied. While the narrative of venture funding ubiquity is nice, it hasn’t translated for these accelerators outside of four to six distinct geographies in the US.

While there are many qualitative reasons to join an accelerator outside of funding assistance, funding is and will always remain a critical driver to company scale. As a result, founders are well-served to assess funding track records of accelerators when deciding which programs to apply to. Admittedly, this information may not always be public, but should be a component of founder diligence.

The views of the author of this article are provided as-is and do not necessarily represent the views of First Republic Bank. 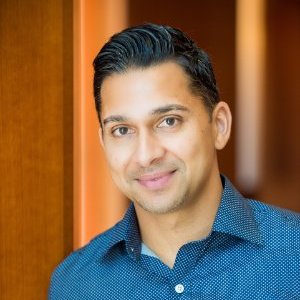