Recently it was reported in The Economic Times of India that Lee Fixel of Tiger Global let it be known that the fund was cooling its activity in India.

“He (Fixel) is not supporting companies which have a high burn rate and are not going anywhere,” said another venture capital manager who has co-investments with Tiger Global. “He will consolidate his portfolio.”

This comes just two quarters after Tiger had its most active quarter ever in India on a new investment basis, investing in 11 total deals in Q1’15 of which 8 were new companies.

However as Asian VC investment activity reached all-time highs in Q2’15 and Q3’15, Tiger slightly pulled back, investing in just 5 new companies in Q2’15, and 4 in Q3’15. The current quarter has seen two new investments, which at its current level would be the second-lowest total since Q3’14, the quarter before Tiger Global raised a $2.5B global private investment fund.

While this new stance on Indian startups may not cause a dramatic shift in overall activity, it will be interesting to watch how Tiger, often one of the most active investors in the region, deploys its capital moving forward, especially after just raising a new $2.5B fund for private investments. 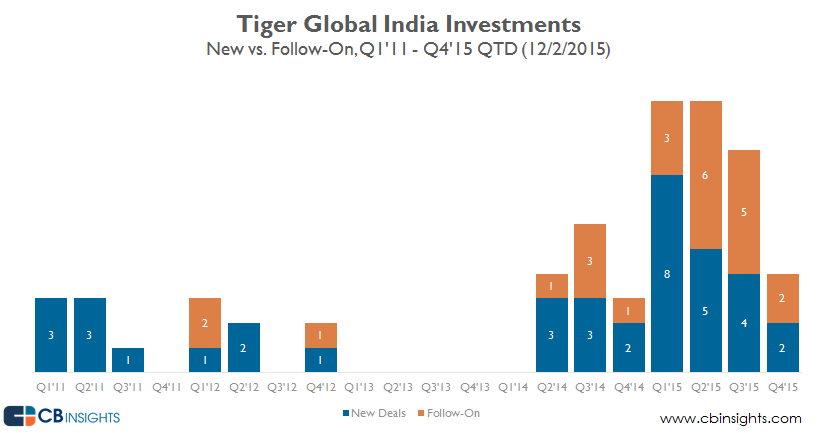 Want more data on Tiger Global’s investment activity? Login to CB Insights or sign up for free below.