With exits behind it including Twitch, Instagram and RelateIQ, Thrive closed its fourth fund at $400M - 40x the size of its first. We dig into what, where and with who one of venture capital's hottest emerging fund managers is investing.

The brainchild of young investor Joshua Kushner, New York-based VC firm Thrive Capital launched with a $10M fund in 2009. Five years later, with exits behind it including Twitch, Instagram and RelateIQ, Thrive closed its fourth fund at $400M – 40x the size of its first. As a frame of reference, Thrive’s latest fund is larger than fellow NY-based VC Union Square Ventures whose most recent funds came in at $350M.

Note: 100% of the visualizations and data you see in this analysis are directly from the CB Insights platform’s Investor Analytics tool. No Excel was harmed in the creation of these visualizations.

In 2014 YTD, Thrive Capital has participated in 16 deals totaling over $375M and is on pace to top its 2013 deal total slightly if deal activity persists at the current run rate. Thrive’s portfolio counts a number of familiar consumer tech companies including Kickstarter, Whisper and Warby Parker but has branched into a number of different areas ranging from real estate tech to eCommerce to bitcoin. The jump in funding in May was due to Thrive’s participation in an $80M financing to health insurance tech startup Oscar, co-founded by Thrive’s Kushner himself.

A few of Thrive′s recent notable deals include:

Below is a graph of Thrive’ monthly investment participation (deals & funding) over time from their profile on CB Insights.

As mentioned above, Thrive has already notched two near $1B exits with Instagram and Twitch and led both of the companies’ final rounds prior to exit. Of course, some of Thrive’s bets didn’t turn out as well. Tutorspree shut down two years after its seed round and MileWise was bought in an apparent talent acquisition by Yahoo in 2013.

Below is a scatterplot of Thrive’s exits with disclosed valuations, taken from their profile on CB Insights.

Unlike some of its NY VC peers including Union Square Ventures and RRE Ventures which have kept their last couple funds largely consistent in size, Thrive has seen its fund size expand exponentially over the past few years. The following table details Thrive’s most recent funding history. Most recently, Thrive raised Thrive Capital Partners IV for $400M in October 2014 after raising Thrive Capital Partners III for ~$150M in September 2012 and $40M before that.

Fund size consistency has been shown to be an important driver of fund returns as the skills/expertise to manage a $10 million fund maybe quite different than those required to manage a $400 million fund.  As a result, it will be interesting to see how Thrive performs given the massive increase in fund sizes in just over 5 years.

Across its first three funds, Thrive has stepped in at the early-stage, primarily in Series A rounds. More recently, Thrive  completed over 1/5th of its deals at the Series B stage including to Jump Ramp Games, Jibe, Urban Compass and OpenGov.

Between the end of 2009 and 2012, nearly all of Thrive’s deals were new investments as the firm looked to build up its portfolio. But over the past three quarters, follow-on deals have taken 50%+ of Thrive’s quarterly deal activity as might be expected given Thrives’ larger fund size. As Thrive deploys its new fund, it may look to double down even further on winning investments showing strong growth. 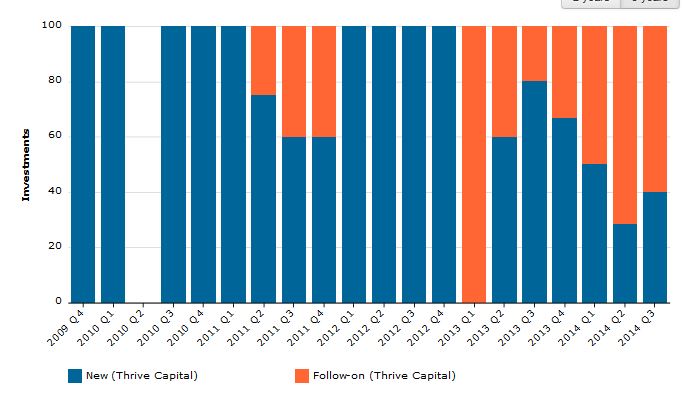 Thrive has placed bets to companies based in Silicon Valley, Iowa and even Sweden, but the large majority of the NY-headquartered firm’s portfolio cos are based in NY. As the chart below highlights, Thrive has completed over 65% of its deals to NY-based startups in the last two years including Spring, Harry’s Razor and Zola. Just over 18% of its deals went to California-based companies.

Thrive Capital has invested in over 20 companies together with SV Angel including recently Spring, Patreon and OpenDoor Labs. Two other firms have been prominent syndicate partners of Thrive include fellow NY firms Lerer-Hippeau Ventures. Dave Tisch’s Box Group and Founder Collective.

YC companies that Thrive has invested in after include recent exit Twitch, Codecademy and 42Floors. 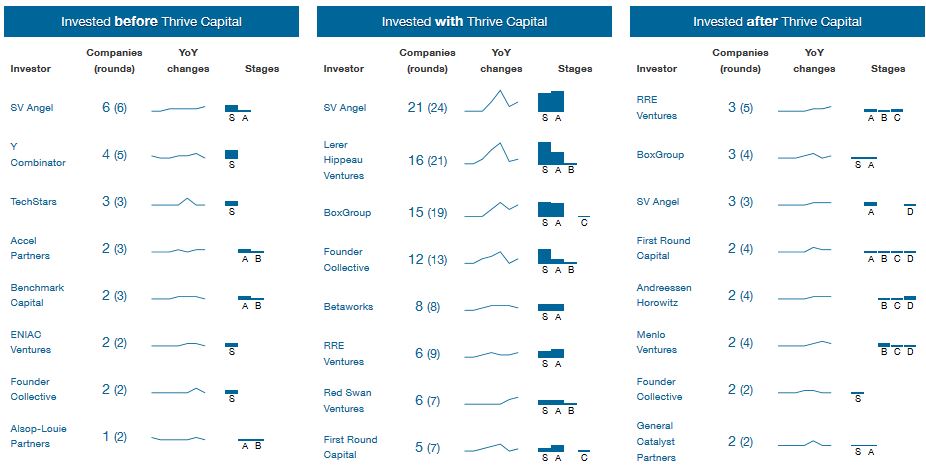