Investors normally focused on the public markets like mutual funds have driven the boom in private company mega-financings in the US. However, when looking at the most recent quarter, it’s clear that there has been a sharp shift in sentiment among them.

We used CB Insights data to put some numbers to this trend, looking at “crossover investors,” a category that includes investment banks, mutual funds, and hedge funds, as well as asset managers and diversified financial services-based firms, all of which customarily invest in the public markets.

When we analyze the annual trend, crossover investors actually saw their most active year in 2015, with nearly 800 deals into private tech companies and more than $40B invested. In aggregate, the financings involving crossovers in 2015 led to a 51% increase in funding for the year.

Between them, these crossover investors were involved in 13 mega-rounds of $1B+ since 2010, and a total of 192 financings that were at least $100M in size. 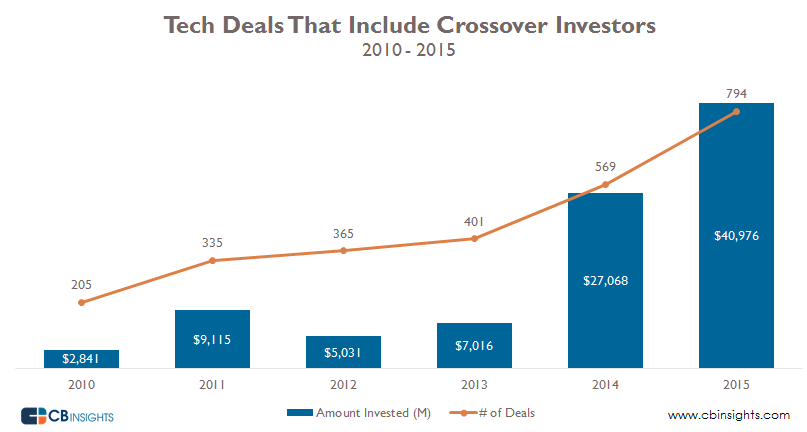 However, when we break this trend down into quarters (starting in Q1’12), it’s clear that Q4’15 saw a significant downward shift, a 28% decline. This was the first drop in activity in 9 quarters (some specific mutual funds we looked at also pulled back on private tech deals).

Deals dropped to 168, representing a 28% reduction in deal activity from the previous quarter, which saw the peak of 233 tech deals with crossover investor involvement. Funding also dropped, with only $8B invested and only 16 deals above $100M with crossover participation, including deals into Jet.com, OlaCabs, and TutorGroup. 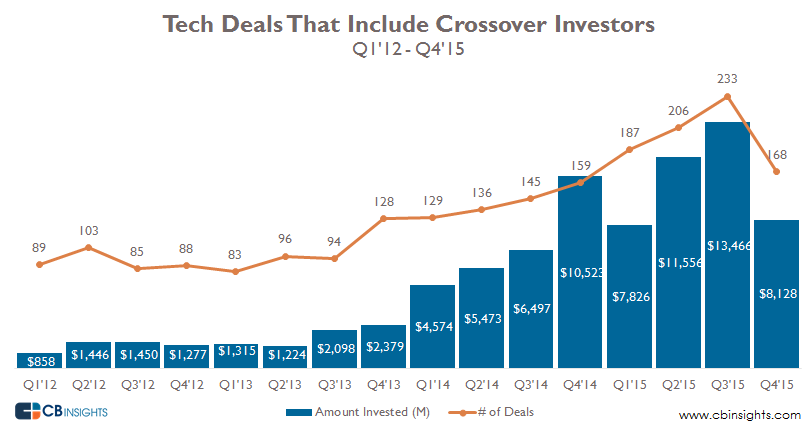 Want more data on crossover investors? Check out our private company database below.