Certain events or comments spark lots of questions to us about a bubble. Here are some recent ones.

Update: Because this has proven popular, we’ll be updating with new signs of the apocalypse as we find them. Every day, we get calls from media outlets asking us if we’re in a bubble. Those calls have intensified as of late. Often, those calls come because folks have seen a comment or an event that seems a bit ridiculous or makes them think of 1999-2000. And so they naturally wonder if things have gone over the edge, and we’ve entered full-blown silly season.

Here are 11 recent examples of things that have resulted in some bubble questions to us.

For the record, we at CB Insights don’t think we’re in a bubble.

BTW, if you love bubble prognosticating and conjecture, here’s some more information on why we’re definitely maybe in a tech bubble.

12. Hallmark would be proud 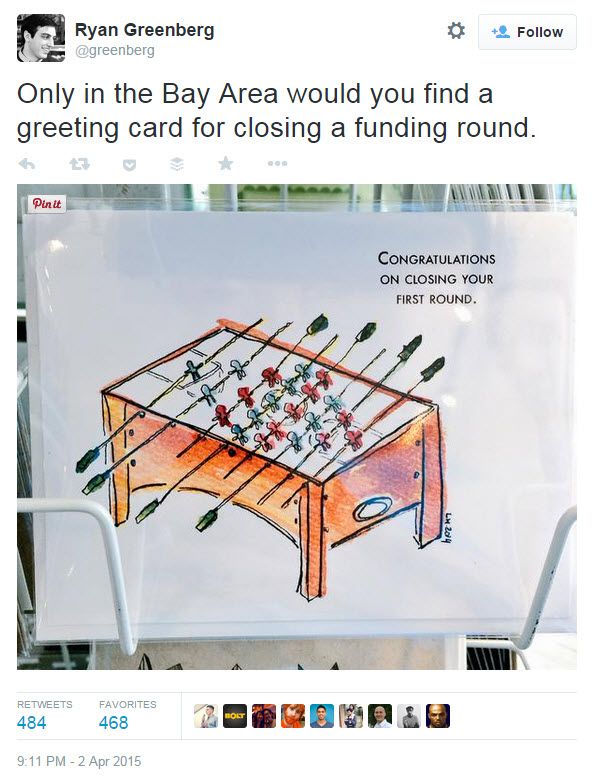 11. Burn rate is a vanity metric

“The sky is falling!” VCs first sounded the alarm in September, claiming that startup burn rates had reached dangerous heights and companies must be wary lest they “vaporize.” Six months later amid the frenzy of SXSW, many of the same voices raised concerns over valuations and cried bubble. Sensationalism makes for great press, and “burn rate” and “bubble” are once again front and center in the tech world’s hive mind.

10. The bankers are coming

Bloomberg highlights how bankers are moving into tech. 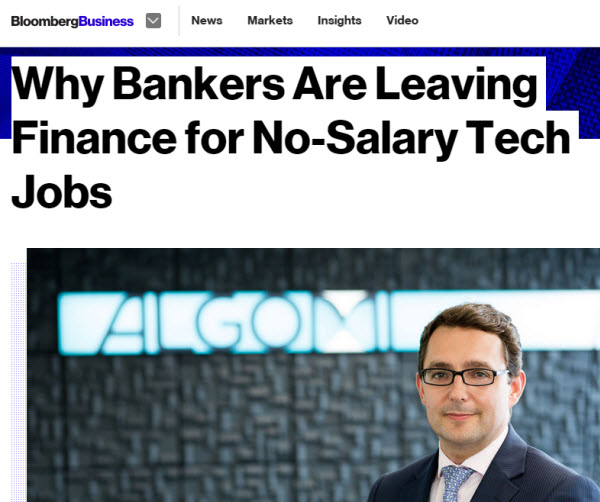 9. Customer acquisition at all costs

From a founder: The top frats / sororities at big schools are being pitched several apps per week and commanding $12k+ to sponsor parties.

8. Equity as a customer acquisition vehicle

There have been some crazy tactics used to gain early customer traction, including giving away stock to early users. Jet.com, the hopeful Amazon competitor, offered users the possibility of getting shares in the company through a referral program.

The top prize winner spent $18K in Facebook ads to eventually win the 100K shares. Does he qualify to join the ever increasing group of micro-VCs?

7. Don’t want equity? How about we just give you money?

In NYC, the land grab is on in full effect. Companies like Spring, YPlan, and Transferwise among others are plastering the subways, cabs and buses with ads for their wares. A running list of startups in the New York area can be found here courtesy of Shai Goldman. Does this mean we might see startup advertisements in our Uber cars soon? Spotify already got their foot in the door.

Revenue is a feature. Some companies can add it later, others need to work it out early.

4. Technology companies will own 110% of the market

Henry Blodget, CEO of Business Insider, and a “Silicon Valley Bigwig” discussed Apple’s entry into the automotive industry. That conversation yielded some optimistic projections for how Apple would do as Blodget highlighted.

Apple, the bigwig was saying, was going to aim to sell 20 million to 100 million cars per year. I again turned to Google and learned that the global car market — the number of cars sold per year worldwide — is currently 88 million. So Apple’s ambition, the bigwig was saying, was to capture somewhere between 25% and 110% of the entire global car market.

3. Billion dollar valuation is a must have

Chris Sacca, VC at Lowercase Capital, spoke at the Launch Festival and mentioned this anecdote about his interaction with a late-stage company that was looking to raise money.

When he pressed the company to come up with why they needed all that money, they called a billion dollar valuation “table stakes” for a company at their stage. “If we’re going to recruit we have to be on a list of unicorn companies, so it has to be at least a billion,” he was told. -Geekwire

2. Will trade home for stock options

It’s no secret that real estate prices in the Valley are out of control. Some people joke that it’s a 2-exit town meaning only people that have sold 2 companies can afford to live there.  But it gets better.

Real estate is crazy enough in San Francisco that I have been offered stock options as part of selling our house. — Joe Fernandez (@JoeFernandez) March 13, 2015

1. Even the investors are saying things are bubblicious

Mark Cuban on this bubble being worse than 2000

Chris Sacca is waiting for the tech industry to crash

Track every unicorn with CB Insights. Login or create an account below.