The rise of U.S. equity markets and VC funding over the past few years has prompted debate as to whether or not we are in another tech bubble. The last economic “aberration,” 15 years ago now, was such a spectacular collapse that industry pundits today are still left with remnant aftertaste of the dotcom nuclear winter. So naturally, many of the same pundits are now quick to draw comparisons between then and now.

And why shouldn’t they?

In 2014 alone, venture capitalists plowed over $48 billion dollars into more than 4,350 startups; the strongest investment activity since the pre-2000s.  There are a record number of startup “unicorns” – VC-backed companies valued at over $1Bn – in existence, including well-known names such as Uber, AirBnb, and Dropbox.  Altogether, as of this writing, there are now 78 unicorns, and more than 20 of them reached this milestone in just the past year. 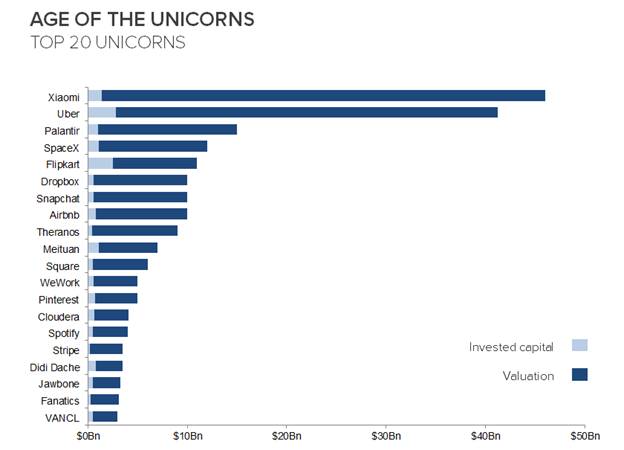 Adding to the fervor are mega VC deals, such as Pinterest’s $367M round, which brings its total invested capital to over $1 billion – perhaps a statistic that will define a new super-unicorn category that would include other behemoths such as Uber, Flipkart, SpaceX, and Palantir. 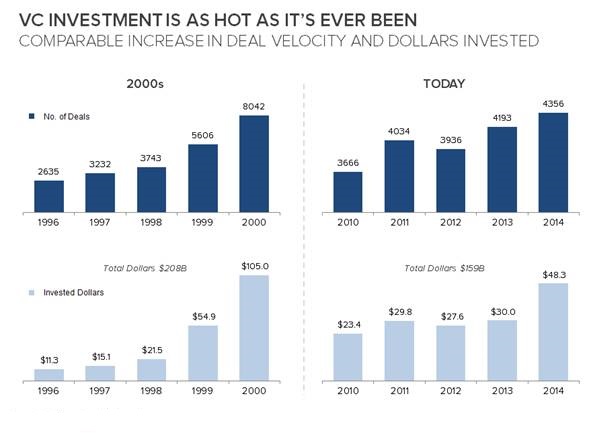 Demand for technology isn’t limited to private transactions either, as public markets are hot for tech too: 115 VC-backed companies filed IPOs in 2014 and the NASDAQ closed above 5,000 for the first time since 2000. In the face of all this data, it’s easy to assume that we are, in fact, in the next tech bubble. 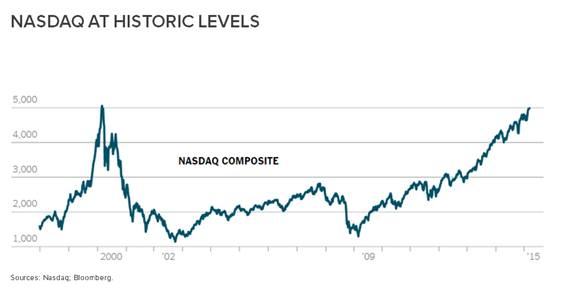 Our viewpoint, however, is that while we are definitely in a hot market, we are not in the same territory as the late 90’s bubble.  To the extent it is a “bubble”, it would be at most a bubble with a small “b”, and we think a more appropriate characterization is a second technology-related boom period. Bottom-line, this is not a rinse and repeat situation.

Defining a Bubble, – It’s All About the Fundamentals

So what is a bubble? A bubble is characterized by a spike in valuation that is unwarranted by business fundamentals such as revenue and profitability. This was certainly true during the last bubble in which top tech companies enjoyed PE ratios in the 80-90x range, 70% of IPO candidates were unprofitable, and $5B valuations were given to companies such as Webvan, which had less than $0.5M in sales. Nowadays, valuations are much more sober: the average NASDAQ-listed company today trades at around 21x PE, and even high-flying companies such as Apple, the most valuable company ever, trades at only 15x PE. 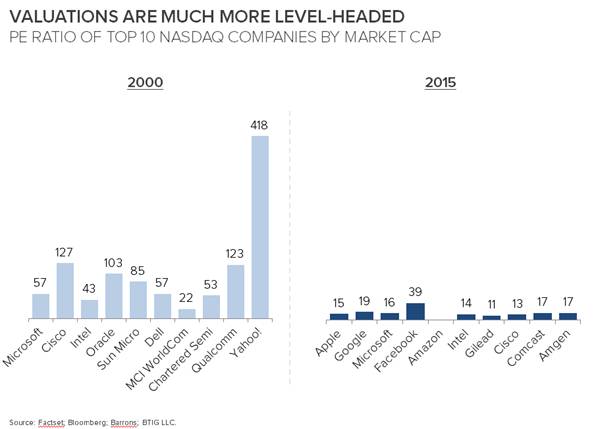 Companies today have real revenue and free cash flow – they have proven and sustainable business models. NASDAQ listed companies of today have an estimated $500B in combined cash, accumulated from their profits; compare this to 2000 when over 80% of tech IPO companies weren’t making a dime. Further, the median tech IPO today has more than 4 times the revenue and more than 2 times the maturity of the median 15 years ago. So while the market is undeniably hot right now, there is significantly more fundamental economic performance supporting market activity this time around.

This statement should not be confused with the likely reality that a good number of public and private companies (and yes some of those unicorns) are over-valued, but there is no denying that the picture is different than it was in 1999-2000. As a reminder, the 2000s was a period when internet companies could do no wrong. For example, Pets.com, a darling of the dot com era, plowed a massive chunk of $300M into ineffective infrastructure, sold products at a third of their cost, and famously spent almost $12M on marketing to achieve less than $1M in sales! 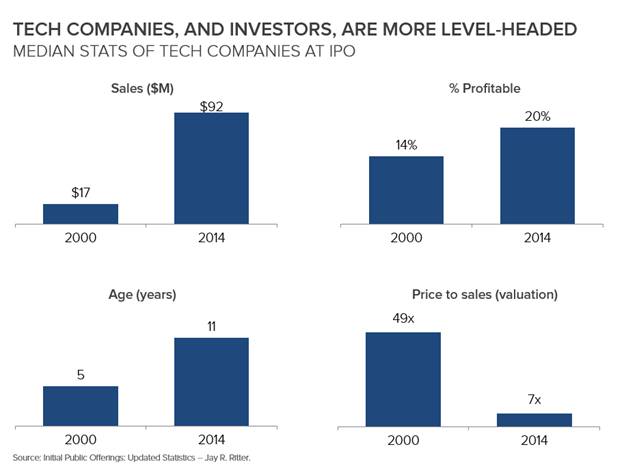 Tech is growing up

What the market is responding to is a rapidly maturing and increasingly more sophisticated tech industry. We have moved past the manic excitement associated with the birth of a commercial Internet, and are now in a more mature, adolescent stage.

Over the past decade and a half, there has been tremendous progress in the tech ecosystem that has enabled the Internet to be become a full-service platform through which almost any need – both enterprise and consumer – can be met. This ecosystem includes not only product or service level innovation, but rather infrastructure level development including cheaper cloud computing, scalable web services, omnipresent mobile channels, democratized marketing, lightning-fast fulfillment technology, and other major trends that have provided the plumbing for a new generation of technological innovation. As ironSource co-founder and CEO Tomer Bar-Zeev puts it, this time it’s not just “about the technology that consumers are using, but the entire infrastructure of companies and services that exist to help those technology businesses succeed.” 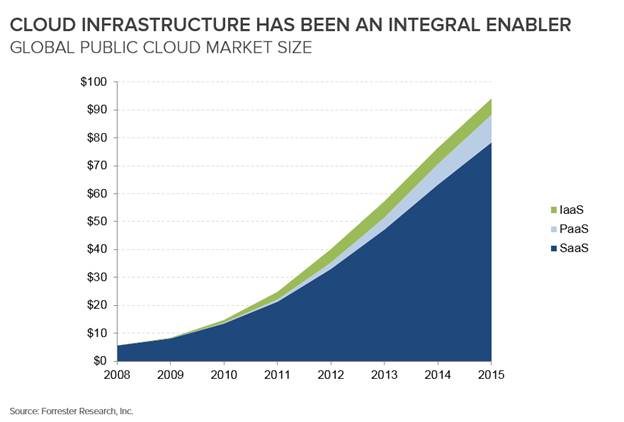 The evolution and confluence of these developments have been crucial to enabling top tech companies such as Apple, Google, Facebook, and Amazon to create immensely scalable businesses, while also empowering the startup entrepreneur with low cost, high power tools with which to compete and innovate. As a result, the market landscape has changed dramatically over the past decade, as shown by the largest companies then and now. 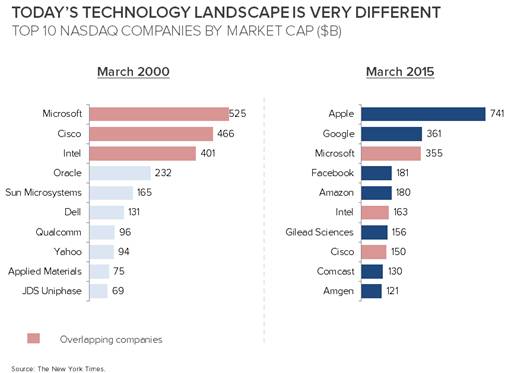 Only 3 of the top 10 companies in 2000 still remain there 10 today; the ones that do remain are a fraction of their prior valuation; and the most valuable companies today, such as Apple and Google, did not even make the list last time. This is all testament to the seismic shift that has occurred in recent years due to the emergence of new products, services, and models of delivery. Today’s tech giants have not only dominated their respective markets, they have generally created or defined them. Given that the average age of these industry behemoths is just 22, it is clear that there has been a definite changing of the guard since the dotcom era. 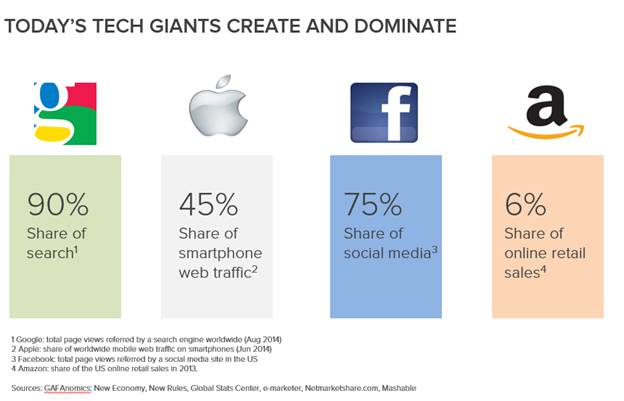 Perhaps the biggest holistic difference between then and now is that in 2000, companies were attempting to change what people do with novel but poorly executed alternatives, whereas today, the tech industry is successfully changing how people do things due to the confluence of major technological developments. Today, technology is no longer a separate industry but rather an underlying utility: from the way consumers access information to how business decisions are made, tech is irreversibly changing both consumer behavior and enterprise workflow. Even areas traditionally considered high-touch and low-tech – hospitality and transport for example – have been transformed (e.g. AirBnb and Uber).

So for the reasons above, we assert that we are in a boom, and not a bubble. The transformative impacts of innovation, such as the empowerment of mobile technology, the maturation of digital media, and the proliferation of data and analytics are changes that are here to stay.  But will there be a readjustment?  Yes – the tech market is extremely active, interest rates are near zero, and investors are sitting on stockpiles of cash, so yes, there is the potential (and we believe likelihood) for a correction in valuation. Some unicorns may die, VC rounds may swing back to less heated valuations, but the current surge in innovation will not collapse in on itself – this time around, the changes are fundamental and the progress irreversible.

As Marc Benioff puts it: “It’s not a tech bubble. It’s the biggest wave of innovation in the history of the world.” We could not agree more, and remain extremely excited by this technological revolution.

Anthony (Tony) Tjan is CEO and Managing Partner of Cue Ball. He leads the firm’s overall direction and is involved across deal development activities, including on-going guidance and mentorship to the leadership of Cue Ball’s portfolio companies. Tony is one of the World Economic Forum’s Global Leaders for Tomorrow and has been a speaker at the TED conference. He is a New York Times best-selling author of Heart, Smarts, Guts and Luck (www.hsgl.com) and sits on the boards of ScrollMotion, ShapeUp, Livefrye, and Miniluxe.

Andrew Fu is an Associate at Cue Ball. He brings a passion for innovation grounded in a strong understanding of corporate finance and previous transactional experience. His experience prior to Cue Ball includes positions with Credit Suisse, the Management Department at The Wharton School, and Wokai, a micro-finance start-up based in Beijing. Andrew graduated from the University of Pennsylvania where he earned a B.Sc in Economics with Honors from The Wharton School.