Tit-for-tat tariffs are pitting the US against Mexico, Canada, China, and the European Union in areas like steel, agriculture, vehicle manufacturing, and more. We dig through company earnings calls to see how executives are responding to escalating global trade disputes.

Motorcycle maker Harley-Davidson is caught in a tariff war between the United States and the European Union.

On April 24, a month after the United States announced 25% and 10% tariffs on imported steel and aluminum, Harley-Davidson mentioned “tariffs” or “tariff” 16 times in its earnings call. This was the most the company has ever discussed the topic.

In the call, Harley-Davidson execs were keeping an eye out for possible retaliatory measures from the EU — the company’s second-largest consumer market after the United States.

Last week, those moves came: the EU hiked tariffs on motorcycles exported from the US from 6% to 31%.

Harley-Davidson is not alone in discussing tariffs. Companies in industries as varied as banking, agricultural machinery, e-commerce, and more are all discussing tariffs and trade war on earnings calls, amidst growing geopolitical uncertainty.

Mentions of tariffs in earnings calls reached a historic high this past quarter. 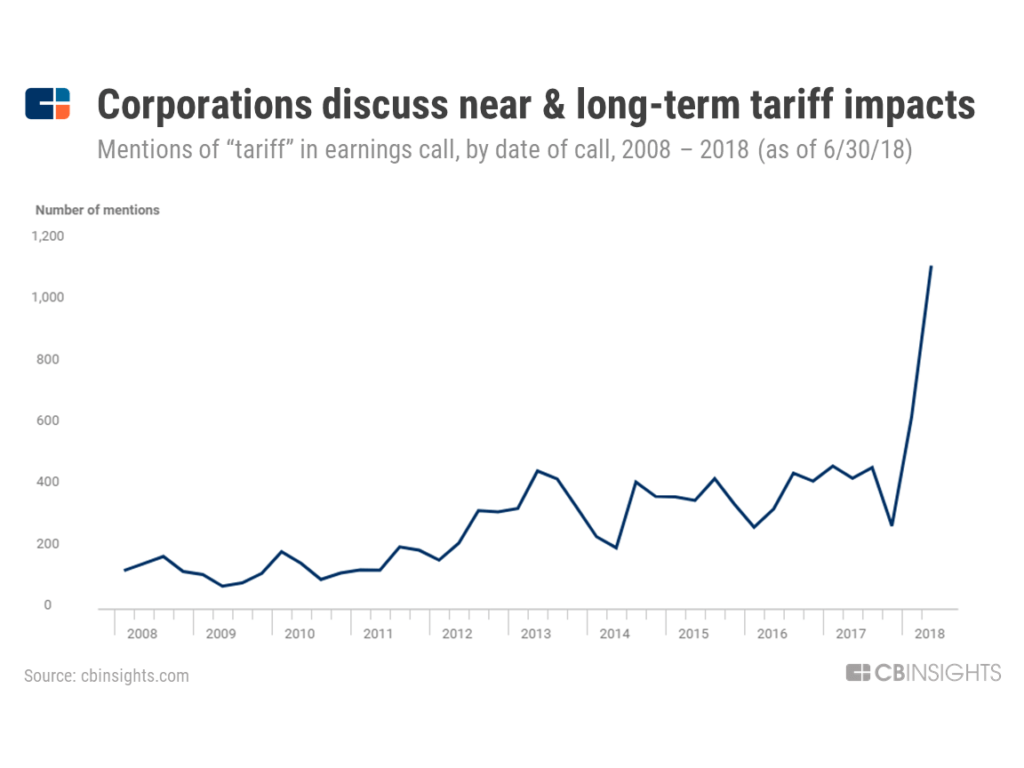 “With the 25-percent additional tariffs on Chinese products worth $34 billion effective on July 6, the United States has ignited the largest trade war in economic history.” — Chinese Ministry of Commerce

Mentions of the words “trade war” have also spiked tremendously.

The mentions illustrated above occurred on earnings calls that took place even before the trade situation worsened between the US and China this month. Last week, China’s ministry of commerce called the United States a “trade bully.”

Both countries began imposing tariffs on $34B worth of imports on the other starting July 6. The auto industry felt an immediate impact, with different versions of the Tesla Model X and Model S seeing a $22,600 — $37,600 price hike over the weekend, according to a report by Electrek. 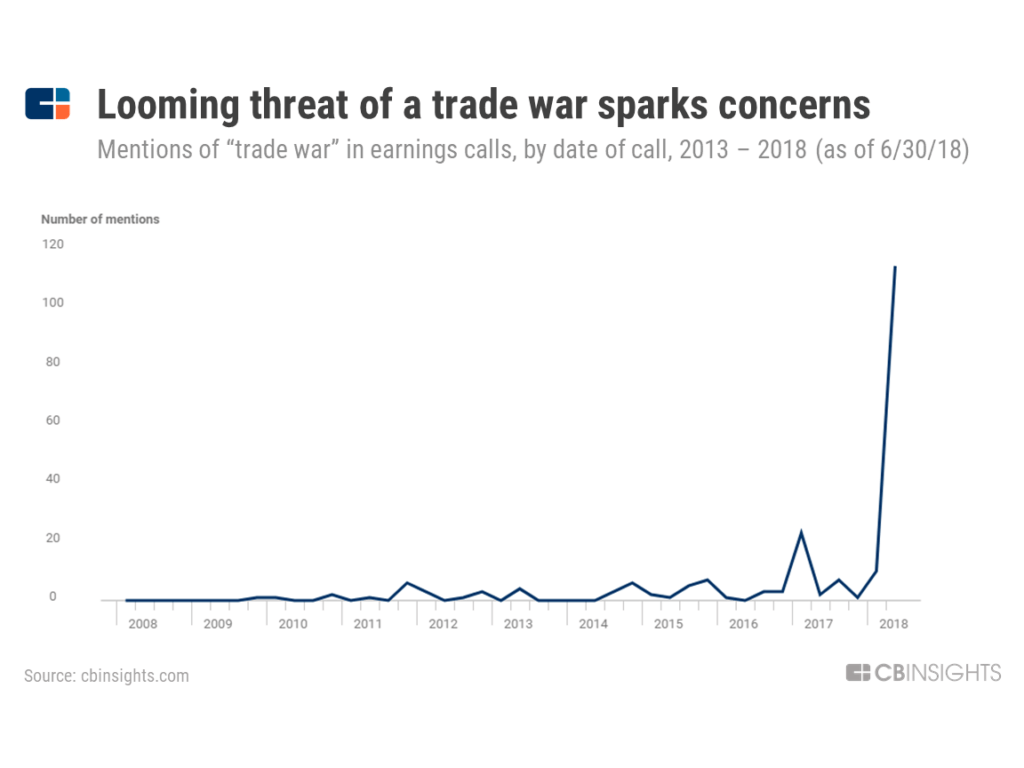 Tensions between the US and China have intensified since March. There have been tit-for-tat tariffs and counter-tariffs imposed by both countries on hundreds of products, from beef and soybeans to investment in the tech sector.

Alibaba went so far as to suggest that “Chinese consumers are going to find alternative ways to bring imports into the country through our platform” if they can’t import US products. The company further emphasized that it believes there will be a big impact will be on US small businesses. 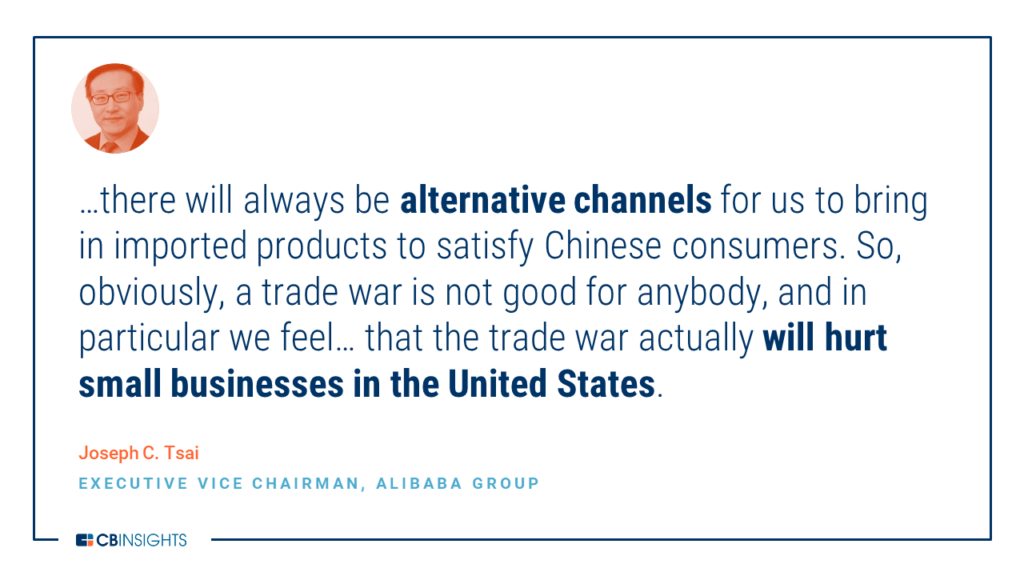 Bloomberg reported that Goldman Sachs, for example, is “reducing an overweight position in developing-nation currencies… as China and Europe warned the escalating trade war could trigger a global recession.”

In an earnings call last quarter, Citigroup CEO Michael Corbat said that a US-China trade war is a macro event than a Citi-specific one in terms of impact, although at the time of the call, he was optimistic about the situation de-escalating. 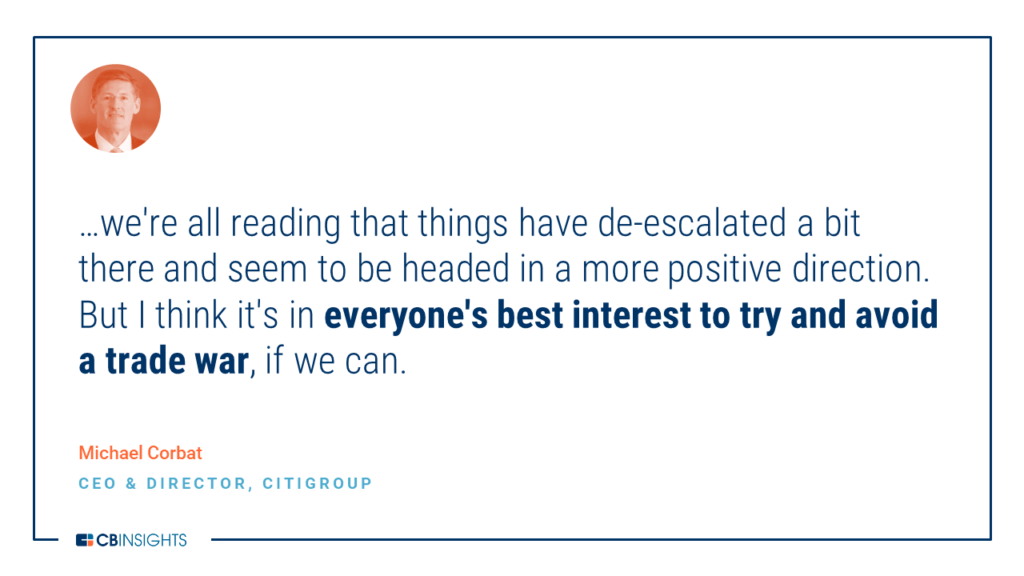 The war over soybeans and food

One commodity that has particularly caused concerns among US farmers is soybeans.

China’s tariff on US soybeans will go into effect on July 6, and Latin America is already beginning to reap the benefits of it.

But China is beginning to source its soybeans from countries like Brazil, and US sellers are in turn shipping their produce to Brazil to meet the country’s internal demand. 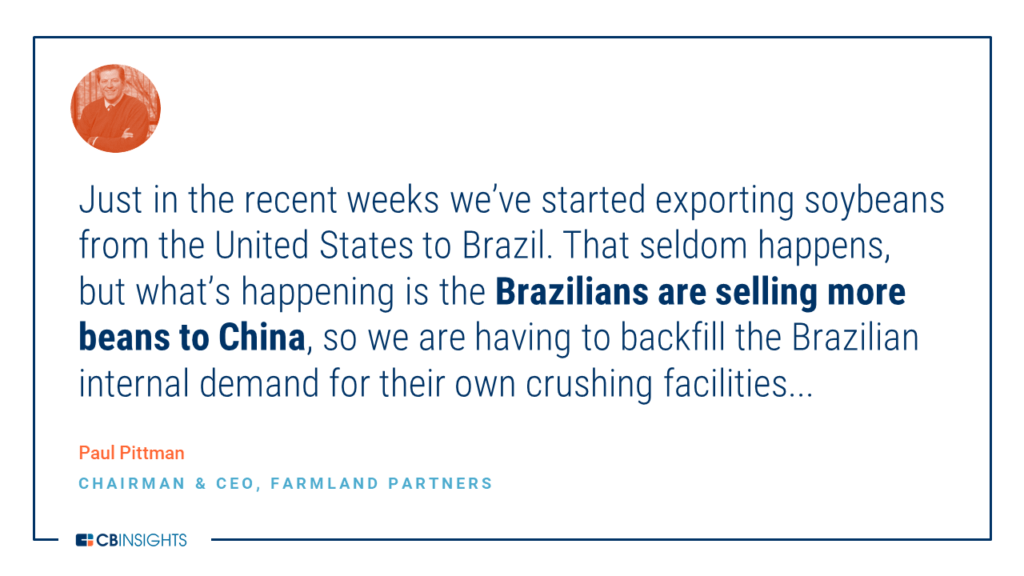 In an earnings call in May, Philadelphia-based agricultural solutions company FMC, which produces herbicides, insecticides, and fungicides, said this shift in trade routes for commodities like soy will be to its benefit. 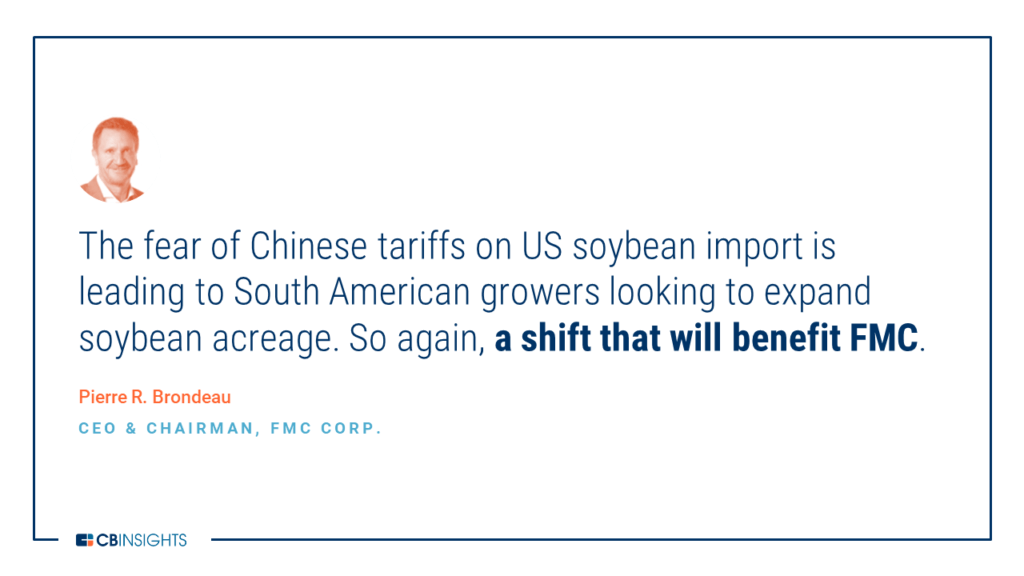 FMC’s optimism aligns with the geographical breakdown of its 2017 revenue. Around 34% of FMC’s agricultural solutions revenue came from Latin America last year, according to the company’s annual report.

Aluminum makers welcome tariffs, but other manufacturers are not happy

One sector that has particularly welcomed tariffs in earnings calls is the local aluminum and steel industry.

As previously mentioned, the US decision to incentivize local steel and aluminum production by imposing heavy tariffs on imports — citing “national security” concerns — was a major trigger for ongoing tariff wars. (The preceding first set of tariffs were aimed at solar panels and washing machines.) 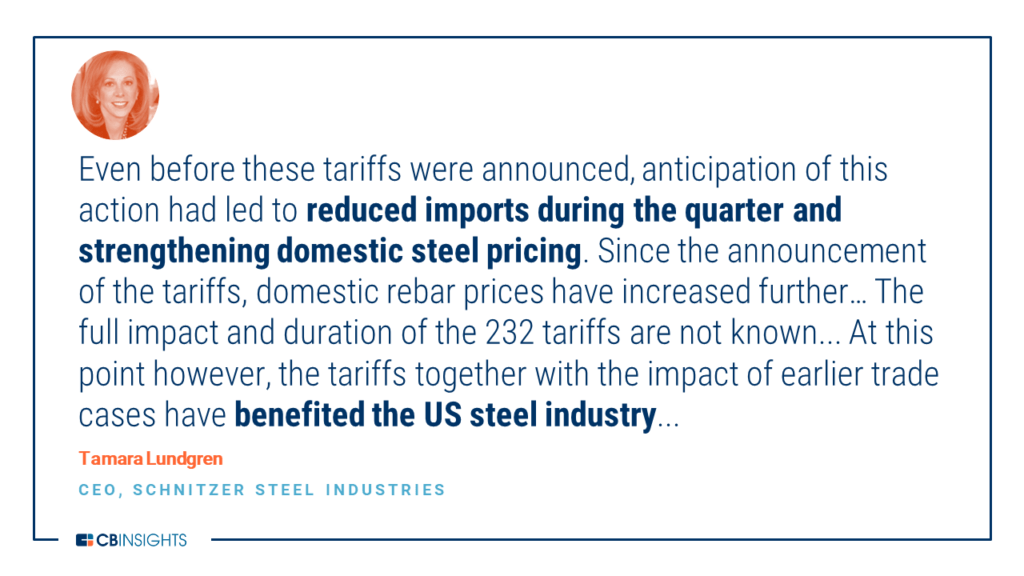 But companies that source cheap raw material have another story to tell.

The road ahead for tariffs

Many of the earnings calls quoted above took place just as talks of retaliatory tariffs were escalating.

“The last time we had a significant trade war for agriculture commodities was in Jimmy Carter days, when I was frankly in high school.”— Paul Pittman, CEO, Farmland Partners

At the time, there was a lot of uncertainty around when and whether many of the tariffs would be imposed. Few companies had actually seen an impact on their business, some were optimistic the situation wouldn’t escalate, and others were just beginning to consider tariffs’ near-term impacts.

Tensions have mounted more in recent weeks, especially with the European Union and China.

Most recently, the US administration has announced potential tariffs on car imports and on Chinese tech investments in the United States.

Next quarter will likely see companies reacting to a situation that has gotten worse, not better.

One approach for companies has been to eat the cost.

Fearful of losing customers, Harley-Davidson decided not to hike the retail and wholesale prices of its motorcycles in the EU to compensate for tariff hikes.

Instead, the company is bearing the incremental costs itself in the near term, as well as shifting its production plants for EU destinations from the US to other international sites.

Apart from the estimated $100M annual impact of EU tariffs, the company will incur additional costs from building production facilities in other countries.

Harley Davidson’s move has sparked concerns that more companies will follow suit, as the full impact of tariffs become clear in the coming months.