The largest share of deals has gone to startups developing next-gen pharmaceuticals.

Genetic engineering, once confined to the laboratory, is now a much more advanced and scalable technology that is on the verge of affecting everything from healthcare to crop production. Initial applications were limited to adding or deleting single genes, such as those for herbicide resistance. But now scientists are able to manufacture entire DNA sequences, capable of instructing a microbe to produce biofuels, fragrances, and even medicines at scale.

This surge in innovation has been reflected in private market financing, which hit a high in 2016 when equity funding to private synthetic biology companies topped $1B. Startups such Ginkgo Bioworks, Impossible Foods, Zymergen are now seeing mega-rounds of >$100M.

Our analysis of the state of synthetic biology includes companies working on therapeutics, agriculture, industrial chemicals, food & beverages, consumer products, software, and organism design platforms. Below we used CB Insights data to visualize deal flow to the various industries being targeted by synthetic biology startups and then broke these sectors down further to understand the segments where activity is happening in each sector. The size of each sector corresponds to the number of equity deals from 2012-2017 (3/06/17). As synthetic biology is still a very nascent industry, some of these categories may have only one company for now. We have categorized them according to these smaller sectors to get a sense of where the industry is headed.

This report contains the following sections: 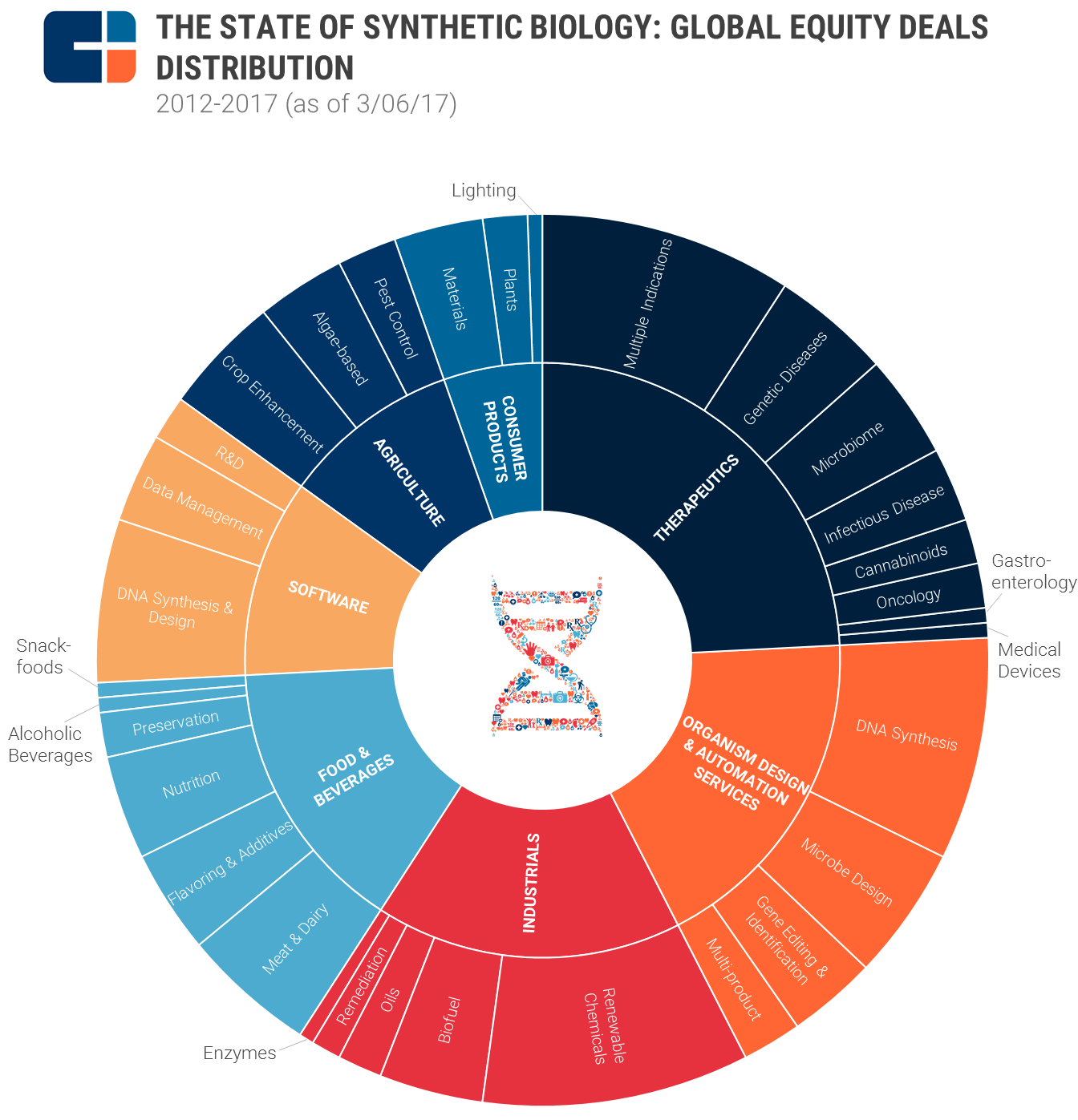 This category includes companies working on crop and livestock production. Some companies are engineering plants to produce drugs or oils while others are focused on crop protection methods.

There were 18 deals to this category since 2012, the majority of which went to crop enhancement startups.

Crop Enhancement: This category includes companies such as Pivot Bio, working to improve the crop microbiome, or Agrivida, developing crops capable of producing chemicals, biofuels, and nutritional products. Agrivida is the most well-funded company in this category, with $68.69M in funding from investors including Kleiner Perkins Caufield & Byers, Toyota Motor Corporation, ARCH Venture Partners, and GSV Ventures.

Algae-based: These companies are using algae as a base to produce biofuel (Sapphire Energy & Matrix Genetics), therapeutics (Triton Algae Innovations), and food supplements (Matrix Genetics). While these algae-focused companies manufacture various products such as biofuels, proteins, and enzymes, we include them in the agriculture sector to highlight the use of plant-based synthetic biology platforms.

Pest Control: This category includes startups such as Agrimetis, which uses synthetic biology techniques to produce natural pest-deterrents or Oxitec, which genetically modifies mosquitoes to limit their life span. Oxitec, backed by the World Health Organization, was acquired by Intrexon in 2015.

Startups applying synthetic biology to everything from food production to cancer therapy. Sign up for a free trial and look for Synthetic Biology in the Collections tab.

There were 28 deals to this category since 2012, most of which went to the meat & dairy, nutrition, and flavoring/additives categories.

Alcoholic Beverages: This category includes Ava Winery. Ava Winery is attempting to produce grapeless wine by analyzing the chemical makeup of popular wines and then chemically synthesizing all required ingredients in order to create a synthetic clone.

Meat & Dairy: Companies in this category, such as Impossible Foods and Clara Foods, are applying synthetic biology techniques to the development of synthetic egg whites, milk, yogurt, and meat.

Nutrition: Startups in this category are both developing nutritional foods and working to improve the nutritional makeup of foods. GEA Enzymes synthesized enzymes for the food industry that reduce saturated fat levels.

Flavoring & Additives: Examples of startups in this category include Miraculex or Milis Bio, which are producing sweeteners, and Geltor, which develops synthetic gelatin.

Preservation: This category is limited to Apeel Sciences which is developing a plant-based coating intended to prolong the shelf life of perishable foods such as tomatoes and apples.

Snack foods: Aranex Biotech is working on hypo-allergenic peanuts by switching off three genes responsible for producing the allergy-causing proteins.

This category is comprised of companies working on industrial applications of synthetic biology such as the production of chemicals used in the automotive, beauty, food, and pharmaceutical industries.

There were 31 deals to this category since 2012, most of which went to the renewable chemicals and biofuels categories.

Enzymes: Startups in this category, such as Biosyntia or Cinder Bio, are developing enzymes to increase the speed of chemical production for the food and industrial markets. Biosyntia uses enzymes derived from microbes that thrive in boiling acid in order to produce extremely stable enzymes.

Biofuels: These companies are developing next-gen processes for producing fuel from renewable resources. Gevo, for example, has engineered yeast to convert sugars from corn or beets into chemicals such as isobutanol which is then used to produce biofuel.

Remediation: Startups such as BioCellection which engineer bacteria to consume organic matter (plastic residue, etc.) and convert it into lipids.

Renewable Chemicals: These companies are using synthetic biology techniques, such as genetically engineering microbes, to produce chemicals in a reproducible and environmentally safe fashion. LanzaTech engineers microbes to convert carbon-rich waste into fuel and other chemical products such as isopropanol and acetic acid.

This category includes companies providing services such as DNA synthesis, microbe design, and gene editing in order to increase the speed and efficiency of genetic engineering.

There were 34 deals to this category since 2012. Startups working in DNA synthesis received the largest majority of deal share.

Microbe Design: These startups are focused on the genetic design and creation of microbes customized to produce chemicals, fuel, fragrances, and other products. Boston-based Ginkgo Bioworks engineers microbes for customers across healthcare, industrial enzymes, and chemical production.

Multi-Product: These companies offer a variety of services. Examples includes Intrexon and Caribou Biosciences. Caribou is pursuing commercial applications of CRISPR technology in therapeutics, agriculture, biological research, and industrial biotech. Intrexon, valued at over $1.5B at the time of its 2013 IPO, designs and constructs custom DNA for the healthcare, agriculture, food, energy, and consumer sectors.

There were 20 deals to this category since 2012, most of which went to companies building DNA synthesis & design platforms.

R&D: Companies focused on advancing general research and development in the synthetic biology sector. For example, Synthace develops an operating system that enables increased automation and reproducibility of biotech research.

DNA Synthesis & Design: Companies such as Benchling build software to increase the speed and organization of DNA editing and analysis research. Benchling is backed by Andreessen Horowitz, Thrive Capital, Ashton Kutcher, and Rock Health, among others.

Data Management: Companies such as Genome Compiler which provide software tools for DNA design and visualization, data management, and collaboration. Genome Compiler was acquired by Twist Bioscience in April 2016.

This category includes companies using synthetic biology techniques to invent new drugs, devices, and methods of drugs delivery. Since therapeutics companies often develop multiple drugs with different indications, categories were chosen based on either the most advanced indication or most representative of their overall pipeline.

There were 45 deals to this category since 2012. Since synthetic biology techniques are relatively new to pharmaceutical manufacturing, many of these companies have multiple early-stage drugs in the pipeline with a variety of indications. Consequently, this category was the largest. Genetic disease, microbiome, and infectious disease were also among the most active categories.

Gastroenterology: This category includes companies such as Novome Biotechnologies which is currently engineering the bacteria Lactococcus Lactis, commonly found in food. The bacteria is reprogrammed to become a manufacturer of anti-inflammatory agents to help control diseases such as Crohn’s Disease and Ulcerative Colitis.

Medical Devices: The only company in this category, Tepha, is a developer of a polymer called TephaFLEX that is produced through a synthetic fermentation process in microorganisms. The polymer can then be converted into a range of medical devices including sutures, films, and textile products.

Microbiome: Companies in this category are developing drugs that affect the gut microbiome. The microbiome refers to the set of commensal bacteria that live in the human gut and affect processes such as digestion and infection control. An example is Synlogic, in part backed by the Bill & Melinda Gates Foundation and NEA, which engineers probiotic bacteria derived from the microbiome to perform therapeutic functions. The most advanced indications in the pipeline are urea cycle disorder and phenylketonuria, a decreased ability to break down the amino acid phenylalanine.

Genetic Diseases: This category includes companies such as Editas Medicine. Editas Medicine, while still in the discovery phase, aims to use CRISPR gene editing techniques to treat a variety of genetically linked diseases such as Usher Syndrome or Cystic Fibrosis.

Cannabinoids: Companies such as Teewinot Life Sciences, which is focused on the biosynthetic production of pharmaceutical grade cannabinoids. The company introduces new genes into a microorganism which are then converted into enzymes and used to produce cannabinoids. Teewinot last raised $7M from Tuatara Capital in May 2016.

Multiple Indications: This category includes companies with a few different areas of focus. Moderna Therapeutics, for example, is still in the early stages of flu and cancer vaccines, oncology therapeutics, and cardiovascular disease therapies.

Want more data about top synthetic biology companies? Log in to CB Insights or sign up for free below.

The new software created atop legacy systems will require a large change in education to run them. Additionally, Industrial IoT is disruptive in nature and will mean retraining will be needed for workers automated out of their jobs.