Synthetic biology is a potentially game-changing technology poised to revolutionize agriculture, healthcare, energy, and industrial chemicals, among other fields. And investors have begun to take notice as private funding to synthetic biology startups grew for the 4th straight year, surpassing $1B for the first time in 2016.

The definition of synthetic biology involves the application of engineering principles to biology, often via the manipulation of DNA. Its intention is to develop new biological systems, such as microbes that produce biofuel, or fundamentally re-design old systems, such as immune cells geared towards attacking a specific type of cancer.

For this report, we used the Nature magazine definition of synthetic biology:

“Synthetic biology is the design and construction of new biological parts, devices, and systems, and the re-design of existing, natural biological systems for useful purposes.”

Below, we used CB Insights data to look at yearly and quarterly funding trends to private synthetic biology companies, in addition to deal share distribution by stage.

Investment dollars varied widely across companies between 2012-2016. While average deal size was $28M, 10 companies closed rounds for $100M or more. Moderna Therapeutics closed the largest rounds including a $450M Series E in 2014 and a $474M Series F in 2016. Moderna Therapeutics develops therapeutics and vaccines based on lab-designed and synthesized ribonucleic acid (RNA). As RNA is responsible for the synthesis of proteins, Moderna uses it to trick diseased cells, such as cancer, into making self-toxic proteins.

Recent deals in 2017 include a $540K round to Novome Biotechnologies, a $23.5M Series B to AgriMetis, and a $41M Series B to Synthego. Novome Biotechnologies engineers microbes to respond to gastrointestinal conditions and deliver therapeutics at the appropriate time. AgriMetis is engineering nature-derived compounds to create a new breed of crop protection products for the agricultural market. And Synthego has developed a scalable process of synthesizing RNA products for CRISPR genome editing and research. 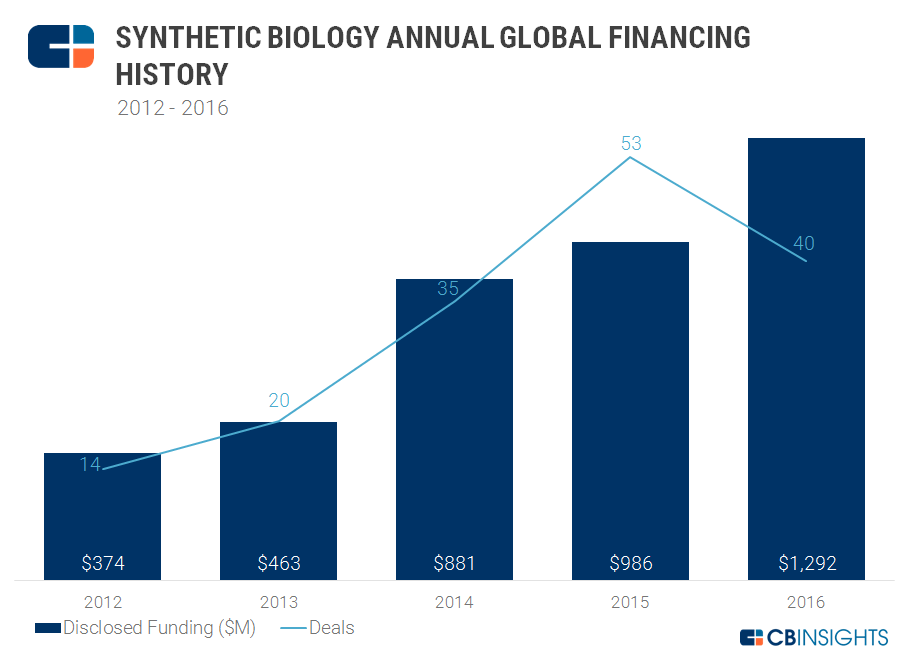 On a quarterly basis, funding saw a 73% decrease from $648M across 8 deals in Q3’16 to $177M across 7 deals in Q4’16. The funding drop was largely due to the $474M Series F to Moderna Therapeutics in Q3’16 from investors including Wellington Management, Viking Global Investors, and Flagship Pioneering.

Startups applying synthetic biology to everything from food production to cancer therapy. Sign up for a free trial and look for Synthetic Biology in the Collections tab.

Zymergen employs machine learning and robotics to genetically engineer microbes to be used in industrial fermentation and petroleum manufacturing. Apeel Sciences is developing a plant-based preservative coating to lengthen the lifespan of perishable products such as tomatoes or blueberries. And Lygos engineers microbes to convert sugars into industrial chemicals such as malonic acid which is used in flavors, fragrances, and pharmaceuticals. 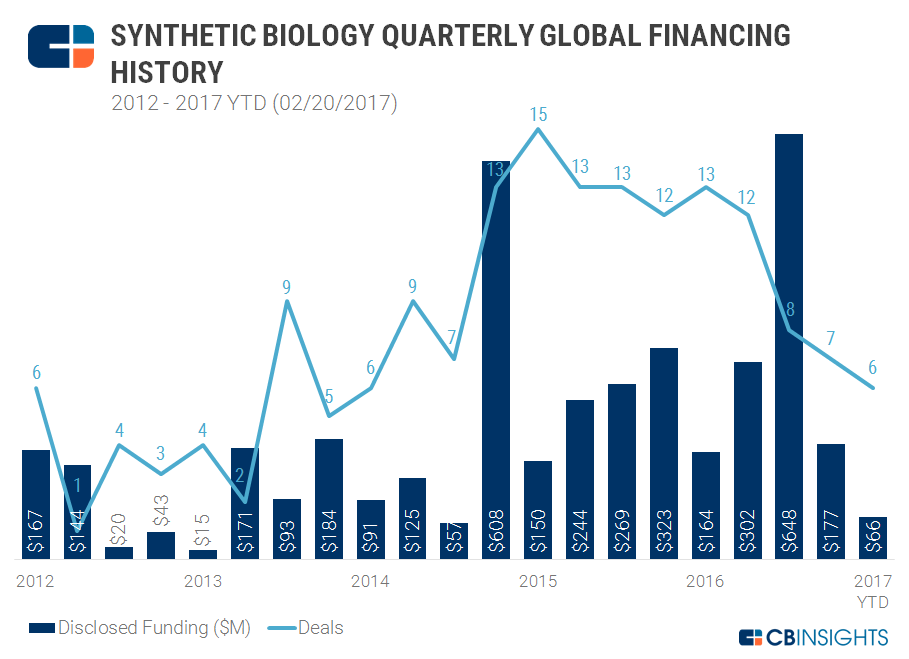 While synthetic biology is just now becoming a buzz word in the media, many companies building these technologies have been at work for years. This is why mid- to late-stage funding rounds go as far back as 2012.

However, the decreasing cost of DNA sequencing and synthesis, increasing reliability of genetic editing tools such as CRISPR, and increasing investment in synthetic biology research has led to many new companies raising early rounds more recently.

Since 2013, early-stage deals (seed/angel & Series A) have consistently occupied the lion’s share of all deals to synthetic biology startups, taking 47% in 2016. On the other hand, mid-stage deals (Series B & C) dropped from a 43% share of all deals in 2012 to 25% in 2016. Late-stage deal share has fallen every year since 2013, landing at 8% last year. In addition to a seed round to GEA Enzymes from Indie.Bio, 2017 has also seen a Series E round to Agrivida and Series Bs to Agrimetis and Synthego. 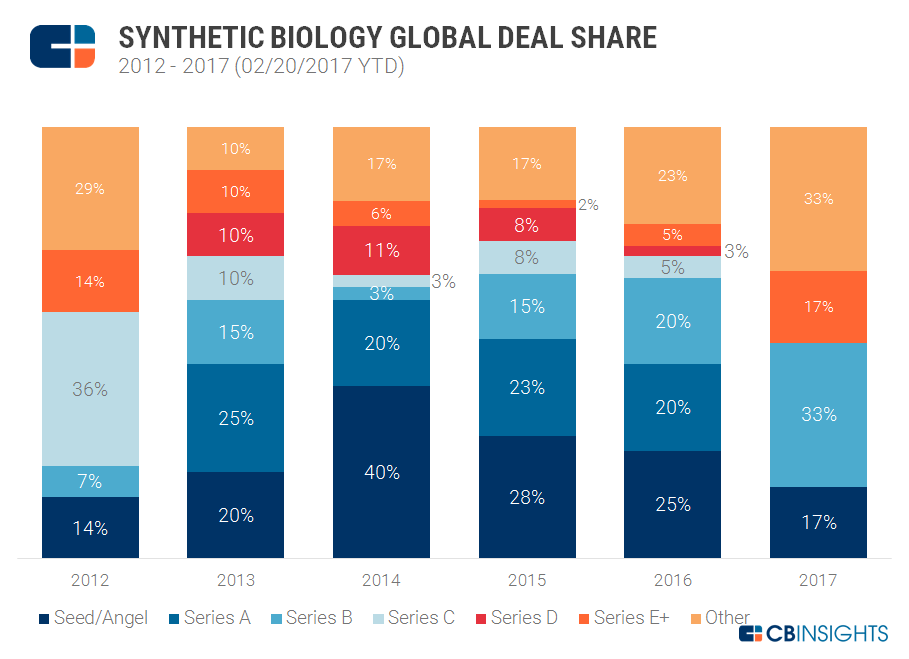