Research Brief
3562
Of the top 5 most well-funded companies, four are in Asia.

From freight and last-mile delivery, to warehouse and inventory management, startups are gunning for the supply chain & logistics industry. 2016 is already a record year for dollars invested in the space, having exceeded 2015 funding totals by 70% to-date (through 10/19/2016). A flurry of mega-deals to Asian logistics companies such as Cainiao, Best Logistics, and Go-Jek helped drive the funding gains in the year.

At the current run rate, 2016 deal count is also on track to surpass last year’s total.

Using CB Insights data, we examined investment activity from 2012 to 2016 year-to-date in the supply chain and logistics tech space.

We define this category broadly to include companies that use software to improve efficiency across the supply chain and logistics ecosystems. However, we exclude on-demand companies restricted to specific verticals (e.g., we do not include those companies focused exclusively on restaurant or grocery delivery, or consumer moving companies).

The category really took off in 2014, when deals and dollars doubled compared to the previous year. The following year, 2015, saw another run-up in activity with nearly 300 deals.

Private equity investors have stepped up activity to the space, contributing to a few massive funding rounds this year. The top ten largest funding rounds of 2016 amounted to $3.4B, four of which came from private equity investors, the largest being a $1.5B financing to Chinese logistics company, Cainiao (the company mainly serves participants in Alibaba’s ecosystem).

In addition to Cainiao‘s private equity financing round, other notable 2016 deals include a $760M private equity round to Best Logistics, another Chinese logistics company, as well as a $550M Series B to Go-Jek, Indonesia’s only unicorn, a motorcycle transport and delivery service. There were two other $100M+ mega-rounds to companies in the space, including a $133M private equity funding for enterprise resource-planning platform Infor and a $100M Series C round to Chinese last-mile delivery firm YunNiao.me. 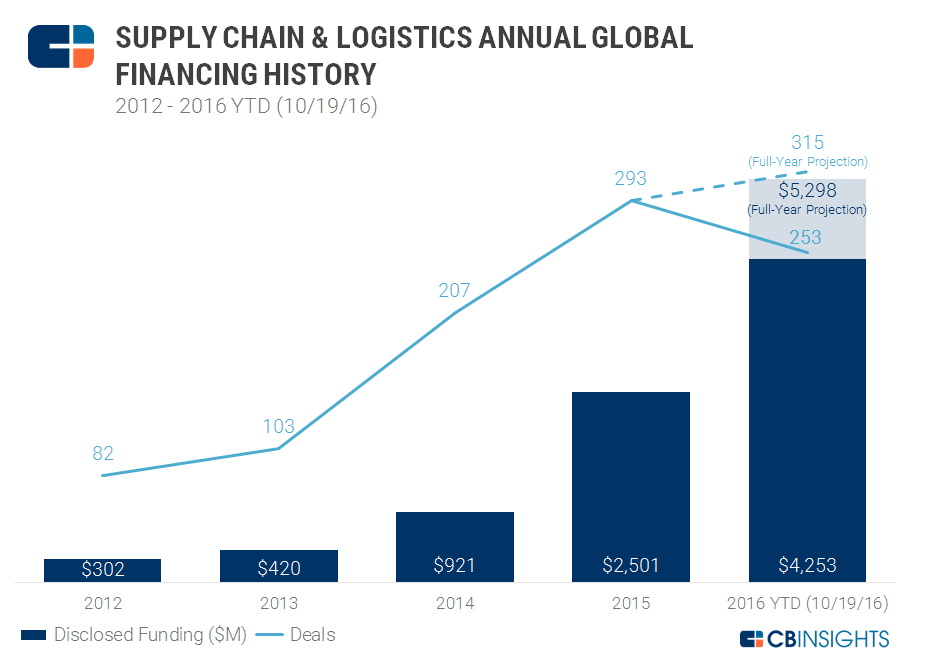 In Q3’16, deals reached 100, the highest quarterly deal count on record and roughly 8x the quarterly activity seen in the beginning of 2012.

Two of the last three quarters have reached over $1B in funding. Dollars surpassed $1.8B in Q1’16 and $1.7B in Q3’16. It should be noted, however, that Q1’16 funding was significantly bolstered by Cainiao‘s $1.5B financing. Additionally, the $760M private equity round to Best Logistics, as well as the $550M Series B to Go-Jek, discussed above, accounted for a significant share of Q3’16 funding. 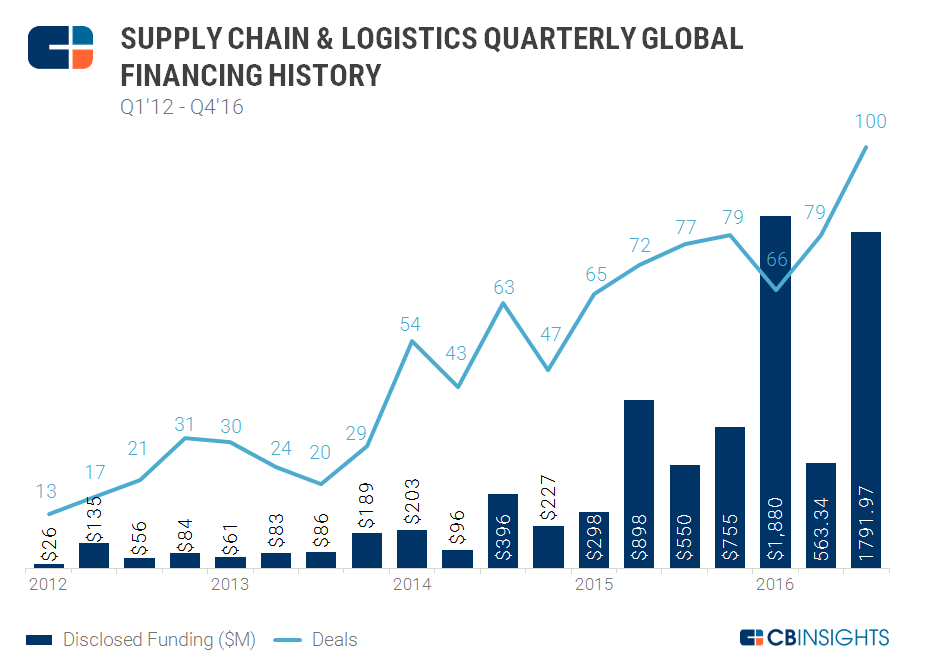 Early-stage investment (seed/angel and Series A) has accounted for over 60% of deal share since 2013, while mid-stage deals (Series B and C) accounted for 10% or more of deal distribution over the same time.

Our “Other” category, which includes minority investments by corporates and convertible notes, accounted for ~18% of all deal share on average since 2012. 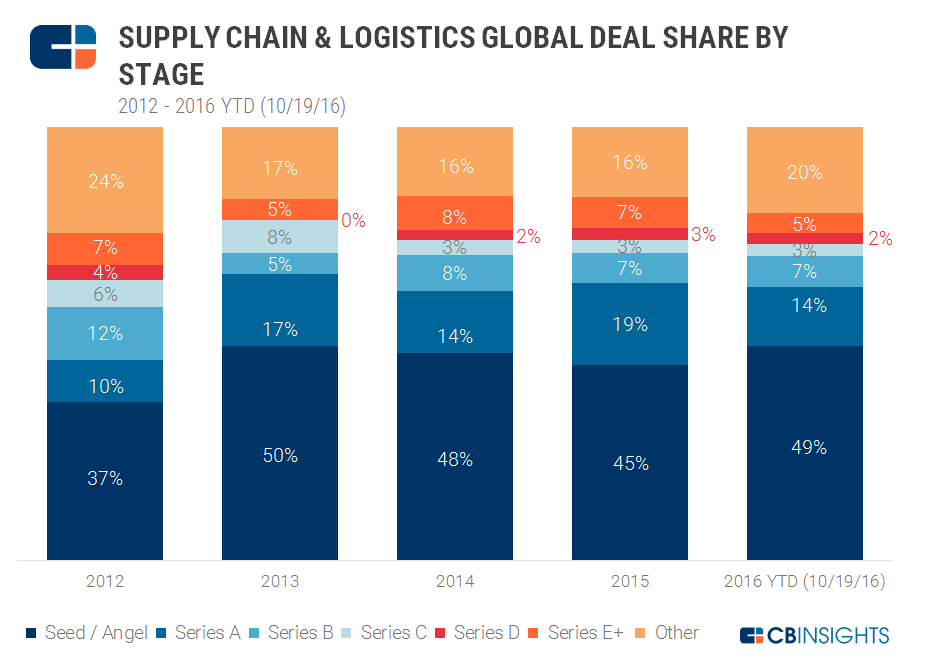 We also examined dollar share by stage. As expected, the actual dollar share for seed/angel investment is significantly smaller than its corresponding deal share. For example, despite accounting for 50% of deal share in 2013, dollar share to seed/angel-stage companies was only 9%. As a percentage of dollar share, money allocated towards seed/angel rounds has actually decreased since 2014, as more money shifted to later-stage rounds.

In 2013, late-stage investment, Series E and above, accounted for 40% of dollar share. In 2016, 61% of dollar share was invested in Series E+ rounds. This is most likely a reflection of the large private equity rounds this year (e.g., Cainiao‘s $1.5B financing and Best Logistics‘ $760M financing). 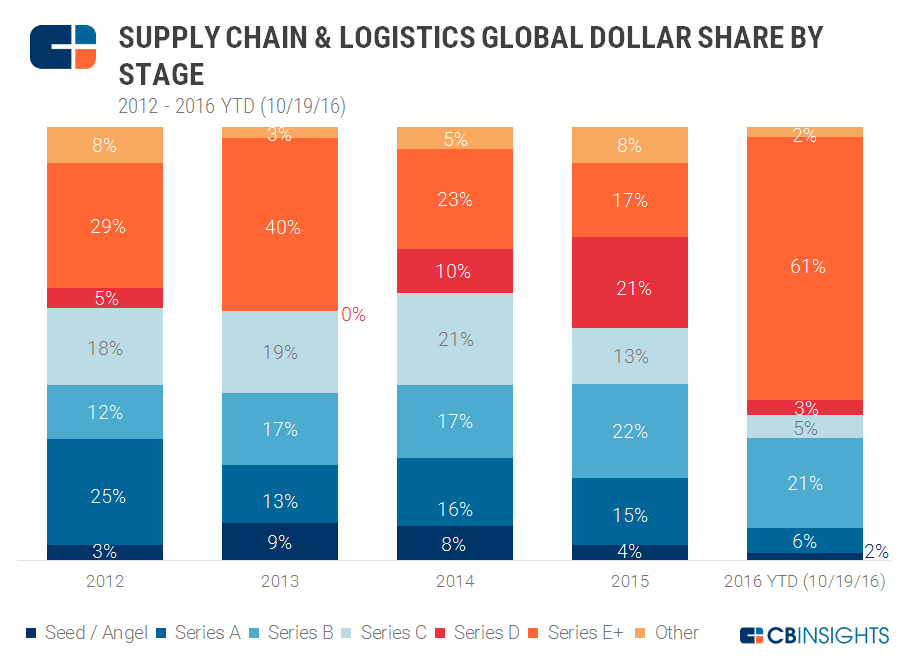 FundersClub was the most active investor in private supply chain and logistics tech companies between 2012 and 2016 year-to-date. A few corporate investors, including Qualcomm Ventures and UPS Strategic Enterprise Fund, also made the top rankings.

The 5 most well-funded supply chain and logistics technology companies have raised a combined $3.6B in funding.

Cainiao, discussed above, tops the list with $1.5B in total funding through one round of private equity financing. The Chinese company provides a logistical platform that primarily services the Alibaba marketplace. The private equity round, which valued the company at a $7.7B, was led by GIC, Khazanah Nasional Berhad, Primavera Capital Group, and Temasek Holdings.

Indonesia-based Go-JEK, discussed above, provides delivery and transportation services via a network of motorcycle drivers. The company raised a $550M Series B in August, having previously raised two rounds of undisclosed seed and Series A financing.

Dada is the fourth most well-funded company, having raised $400M to-date through a $100M Series C and a $300M Series D in December of 2015. The China-based company (discussed above), provides crowd-sourced last-mile delivery services.

Want more data about top supply chain and logistics startups? Log in to CB Insights or sign up for free below.

Photo Credit: Jumilla, flickr, Creative Commons 2.0
This report was created with data from CB Insights’ emerging technology insights platform, which offers clarity into emerging tech and new business strategies through tools like: If you aren’t already a client, sign up for a free trial to learn more about our platform.