Research Brief
3690
There have been 2 IPOs in 2016 so far for logistics and supply chain startups, while last year no company in the space went public.

For the third year in a row, there were more than 40 exits of private supply chain & logistics tech companies, including IPOs and mergers & acquisitions. So far this year, 2 companies in the space have gone public, compared to last year when there were no IPOs.

We used the CB Insights database to examine the exit market for supply chain & logistics technology companies. We define this category broadly to include companies that use software to improve efficiency across the supply chain and logistics ecosystems. However, we exclude on-demand companies restricted to specific verticals (e.g., we do not include those companies focused exclusively on restaurant or grocery delivery, or consumer moving companies).

While the number of exits in the space has ticked up slowly over the past few years, funding within the category has risen quickly. At the current run-rate, funding to private supply chain and logistics technology companies is on pace to surpass $5B for full-year 2016, double funding in 2015. 2016 is expected to see over 315 deals at the current-run rate, compared to 293 in 2015.

Between 2012-2015, there was a progressive rise in exit activity, with 2015 seeing a high of 45 exits, all of which were M&A deals. 2016 has seen a comparable volume of exit activity, but with two public offerings thus far: RFID logistics company Impinj and logistics platform WiseTech Global.

In total, 205 companies have exited since 2012 and 7 of them have been initial public offerings. The number of IPOs has not exceeded 3  per year since 2012, and in 2013 and 2015 no supply chain & logistics technology companies entered the public markets. 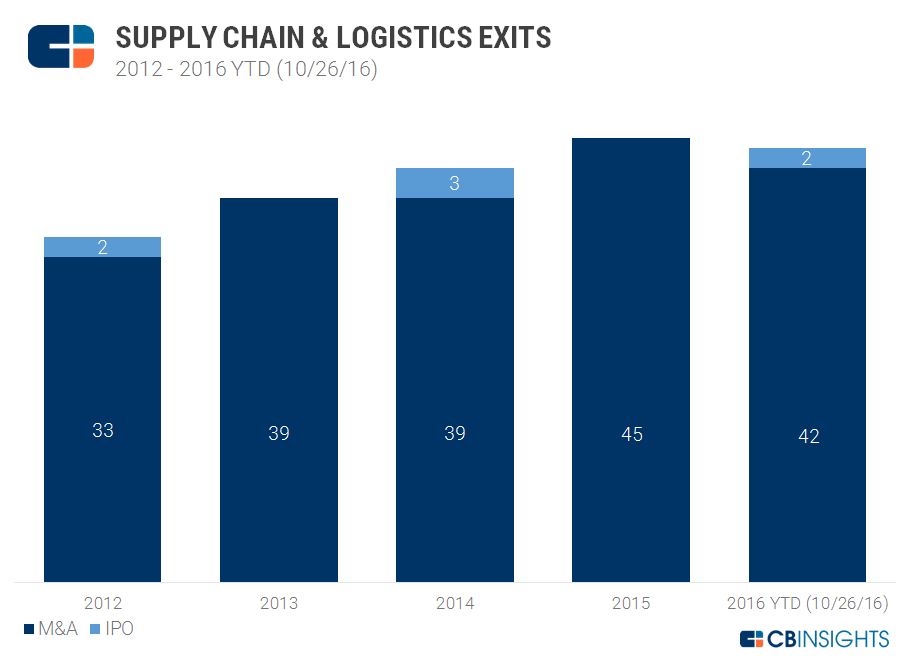 Most well-funded companies before exit

TradeCard, an enterprise resource planning (ERP) and supply chain sourcing platform, was the most well-funded supply chain and logistics company before merging with GT Nexus, another ERP company, in April of 2013. GT Nexus was one of the top 5 exits by valuation (see list at the end of the post) when it was acquired by Infor in 2015.

Telogis, a telematics and asset tracking company, was the second most well-funded before being acquired by Verizon Communications in June of 2016.

Per each company’s disclosed valuation, below are the top 5 supply chain and logistics technology exits by valuation since 2012.

Kiva Systems claimed the highest valuation at exit in 2012, but WiseTech Global and self-driving trucking company Otto both exited this year at comparable valuations.

It should be noted that since October 26th, there have been two major exits of note. FleetMatics, which went public in 2012 at a valuation of $585M, making it the fifth-largest valuation at exit on our list, was acquired by Verizon Communications in early November at a valuation above $2B. Additionally, ZTO Express, a Chinese express-delivery company, went public at a $12B valuation. Prior to 2016, there had been no billion-dollar exits.

Want more data about supply chains and logistics technology companies? Log in to CB Insights or sign up for free below.