Research Brief
3518
Two of the larger deals this year include Axcella Health's $43M Series D and Before Brands' $13M Series A.

The industry has observed steady growth since 2012 with deal count slowly working its way up, with the exception of 2014 in which funding plummeted.

In the US market, the Food and Drug Administration is not authorized to review dietary supplement products—which includes vitamins, minerals, and herbs—for safety and effectiveness before they are marketed. This is contrary to many other products, including medical devices, pharmaceuticals, vaccines, food products, and cosmetics. Though there is some surveillance of the industry, the manufacturers and distributors of dietary supplements are mostly self-regulated.

A total of 52% of US adults reported use of supplements in 2011–2012, the same rate recorded in 1999–2000, according to a recent study by Memorial Sloan Kettering and Montefiore Medical Center.

Private funding to the dietary supplement industry reached $71M in 2016 year-to-date (through 10/12/16), and has already reached a four-year record high of 22 deals.

At the current run rate, funding is on track to reach $91M. This would constitute over 300% growth in funding since 2012. Outside of 2014, the industry has seen funding increases every year since 2012.

Two of the larger deals this year include Axcella Health’s (formerly Pronutria Biosciences) $42.5 Series D backed by Nestle Health Science and Before Brands‘ $13.1M Series A with investors including 23andMe founder Anne Wojcicki. 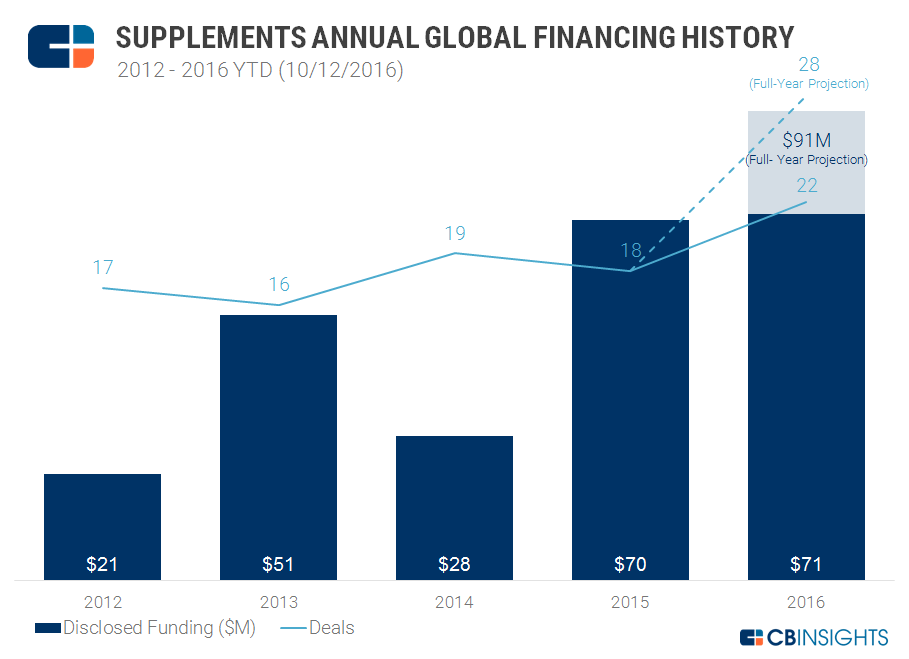 Despite deal flow for the year already reaching a 4-year high, deal count dropped for the second-consecutive quarter, with Q3’16 seeing just 5 deals.

Funding saw a modest increase in Q3 over the last quarter, but is still far below disclosed dollar investments in Q1’16. Propped up by Axcella Health’s $42.5M Series D in February, funding in Q1’16 totaled over $47M, a 4-year record high for the industry.

Q3’16 deals include Multiply Labs‘ $120K seed round backed by Y Combinator and Ritual’s $4.76M Series A led by Forerunner Ventures, among others. Multiply Labs is a Massachusetts-based company developing a personalized supplement pill, which customers can customize with the nutrients they want included and when those nutrients are released. California-based Ritual is developing what they describe as, “the only vitamin you need,” sourced from various locations around the globe. 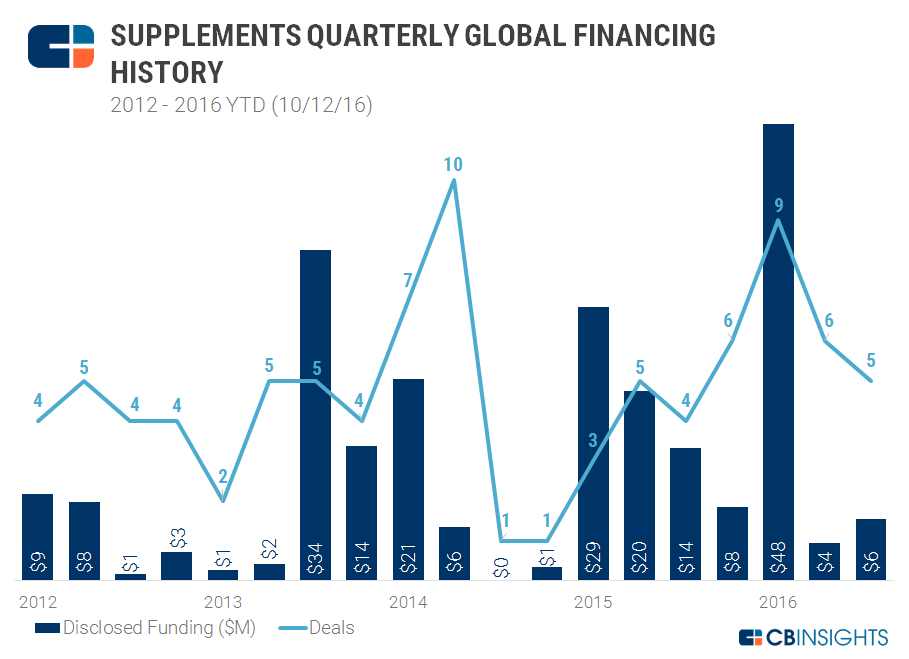 Seed/angel and Series A rounds represent the largest share of deals in 2016 so far, up 11 percentage points since 2015. The only seed/angel rounds in 2015 were to San Francisco-based Nootrobox, a producer of cognition-enhancing supplements. The company is backed by Andreessen Horowitz and angel investors including Yahoo CEO Marissa Mayer, Zynga CEO Mark Pincus, LendingHome CEO Matt Humphrey, and Foundation Capital partner Steve Vassallo.

There have been few Series C+ investments since 2012. The two Series D deals that occurred in 2016 were to amino acid company Axcella Health and subscription-based vitamin company Life Boost.

The “Other” category has taken an increasing share of deals since 2014, accounting for roughly two-thirds of deals. This category includes deals such as corporate minority rounds and convertible note deals. 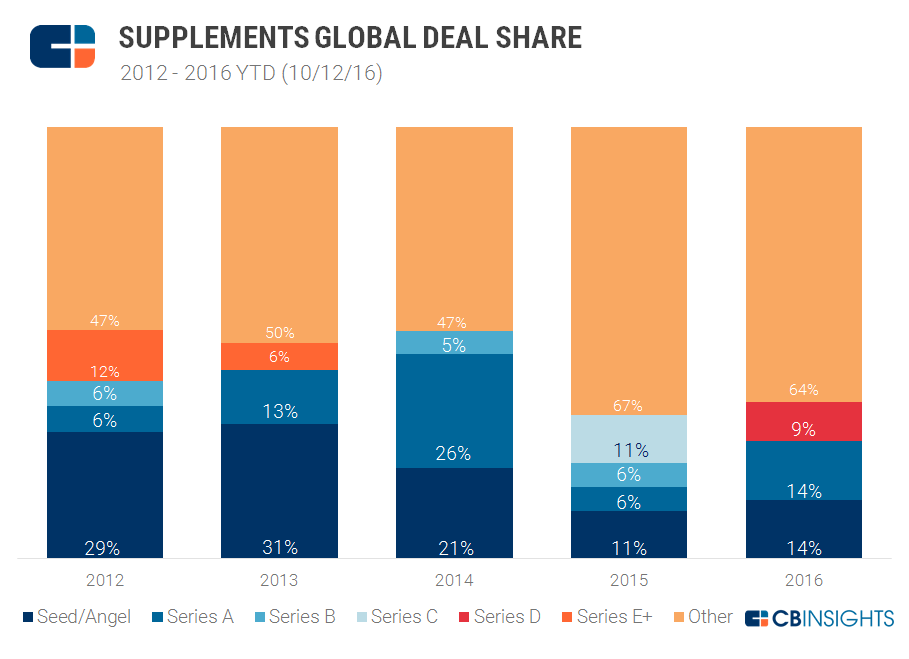 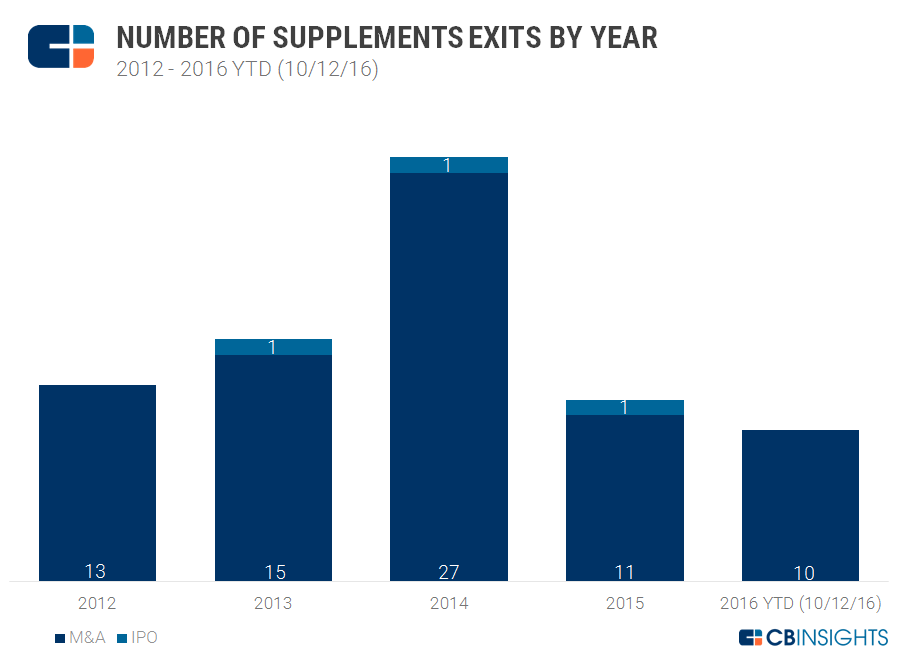 Want more data about top dietary supplement startups? Log in to CB Insights or sign up for free below.