While subscription e-commerce startups have substantially expanded their reach into many areas, from apparel to pet care to leisure activities (as detailed in our subscription market map), investor interest in the space has been inconsistent. Tracking the e-commerce sector as a whole, subscription e-commerce investment activity has fluctuated over the past five years, with the first quarter of 2017 seeing another dip in deal count.

Startups within the space have also experienced varying levels of success. Although Dollar Shave Club made waves with Unilever’s acquisition for $1B in Q3’16, subscription e-commerce startup BeachMint, which raised over $73M from smart money investors such as Accel Partners and NEA, went out of business at the end of 2015. Another startup, well-funded TechStyle Fashion Group (formerly JustFab), has reportedly hired bankers to explore the possibility of a sale.

We used CB Insights data to determine whether investors are still buying in to the subscription e-commerce trend.

Subscription e-commerce startups attracted only 10 funding rounds in Q1’17, down from 16 in the prior quarter but up from 9 in Q3’16. Conversely, Q1’17 saw total dollars invested rise significantly to $82M. However, that’s still significantly lower than the quarterly record of $300M in total funding in Q3’15. The Q1’17 dollar funding increase was driven by a collection of notable deals including a $23M Series B round to Netherlands-based flower-subscription service Bloomon, a $20M Series C round to e-commerce subscription enablement platform OrderGroove, and a $17M Series A round to contact lens subscription service Hubble Contacts. Compare that to Q4’16, when the largest deal was a $7M round, also to Hubble.

Looking at quarterly trends over the last five years, Q3’15’s dollar funding peak was powered by large deals to several of the sector’s most well-funded companies including a $100M Series B to Ipsy, a $100M Series D to The Honest Company, and a $76M Series C to Harry’s. Q3’15 also notched the second-highest quarterly deal count, at 18. Q2’16 holds the five-year quarterly deal record, at 23. 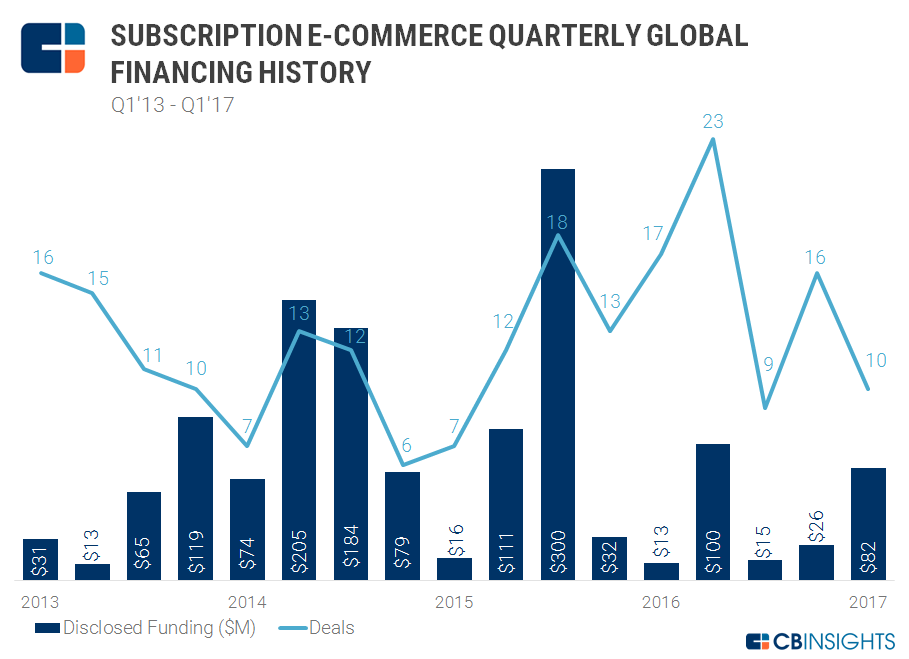 On the other hand, dollar funding is on track to increase to $253M at the current run-rate. If this holds, it would represent a $100M increase in total funding from 2016. 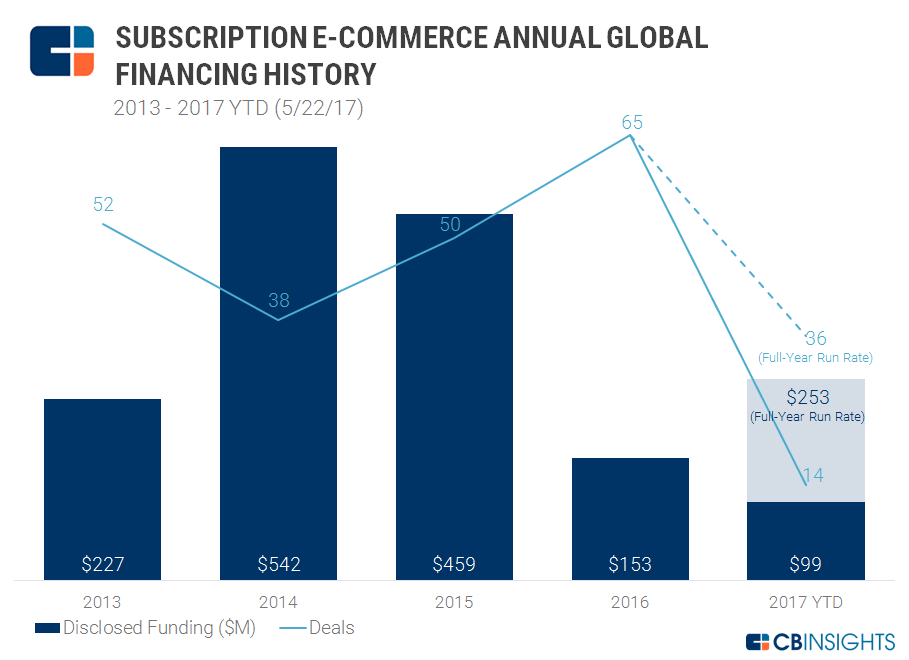 Want more data about e-commerce funding deals? Log in to CB Insights or sign up for free below.