Instead of wanting the past back, want the future sooner.

The following is a guest post from Alistair Croll.

“Back to normal” is a dangerous nostalgia. Like a fire that liberates pinecones lying in wait on the forest floor, the Covid-19 crisis is both a great tragedy, and a chance for rebirth. 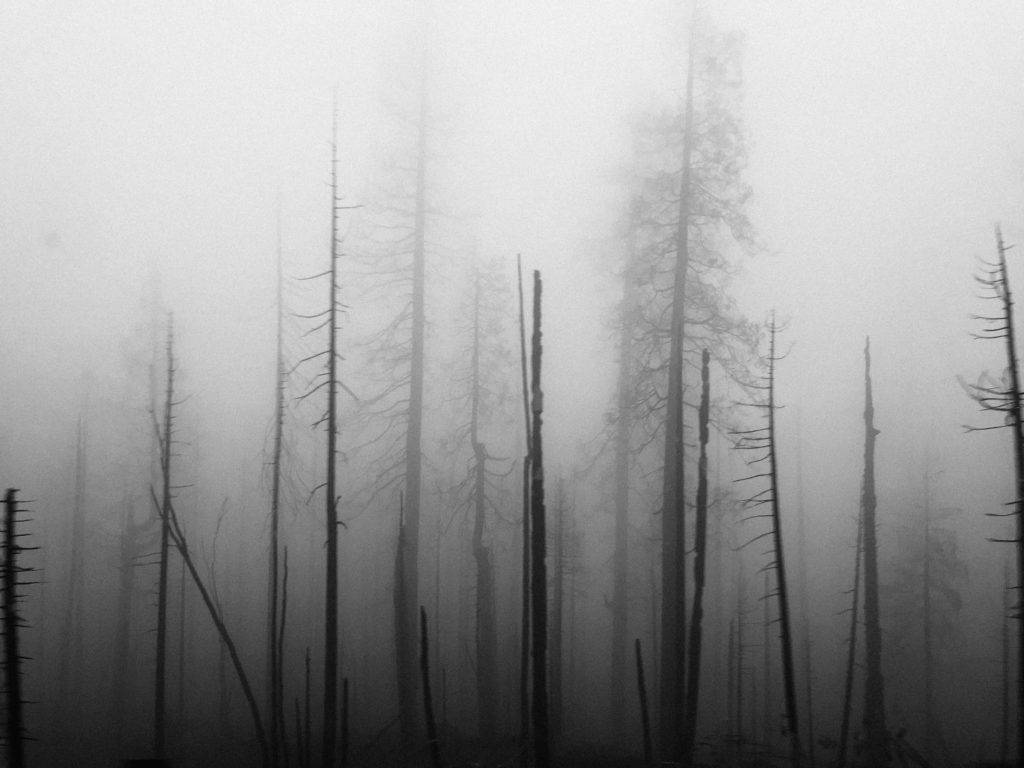 I am not a fan of glib Chicken-Soup-For-The-Entrepreneur’s-Soul platitudes. I try to avoid saying things that might wind up embroidered on pillows or emblazoned on a painting in an Airbnb (remember those?).

If you read on, I hope you’ll find a less breathless, and more rational, explanation for my optimism. It even has charts!

But pinecones are the metaphor I’m after, however cloying.

Since the talk I ran on virtual events last Friday, I’ve heard — via Twitter or email or LinkedIn — from dozens of people who attended the event. Many just wanted to share their reactions, but several organizations reached out to discuss things in more detail. I’ve had calls with governments, music festivals, major brands, and a couple of chats I can’t talk about. It’s been a busy few days, and the stories have been fascinating.

The one thread that’s come up in every conversation is how enthusiastic participants felt after the webinar last week, because it gave them a way to think about what we might create, instead of mourning what we have lost.

It made them, however briefly, want the future.

Yet another Blockbuster example

Netflix and Blockbuster (which I do cite far too much, but they’re such great comparisons) both knew video streaming was coming. In fact, Blockbuster launched streaming before Netflix did.

But Blockbuster wanted to delay the future as long as possible. When a streaming video future finally arrived, Blockbuster would lose all the money it made on late fees and in-store candy sales.

Netflix, on the other hand, wanted the future to happen sooner, because otherwise the company would be bankrupt. Netflix needed the future so much, it turned the US Postal Service into a data delivery platform — by stuffing DVDs into envelopes.

If you want to survive in this transition, you need to take the part of yourself that craves the past, that treasures it, that mourns what’s lost; you need to bundle it up gently; and you need to set it carefully aside.

And then replace it with a desire for the future.

Get excited about what tomorrow might hold. This is a singular moment. For many industries, and for many careers, the slate is clean. Everyone is on the same footing, and the race just started. To paraphrase Bill Gates:

If you expect the world to be different in 2 years, you’re naive; but if you expect it to be the same in a decade, you’re an idiot.

Imagine the world 3 decades ago. In the movie “Wall Street,” Michael Douglas’ character, Gordon Gekko, paces the Jersey Shore in a bathrobe, a gigantic brick pressed to his ear. The scene oozes privilege, telling us this is a man to be reckoned with, an early adopter. Wealthy. Powerful. Important enough for a cellphone. 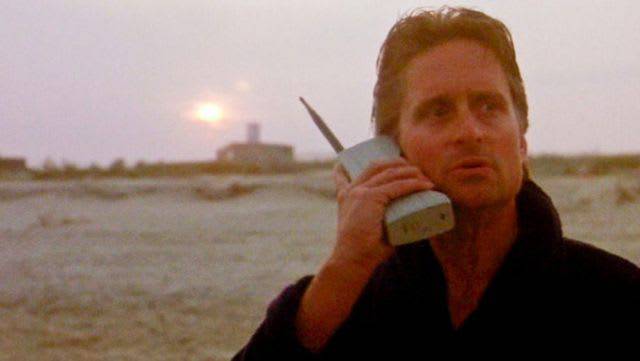 That brick just made calls. Smartphones didn’t exist. No internet. Newspapers were profitable. Digital foreign electoral interference wasn’t a thing. No Wikipedia. No LinkedIn. The Climate Change movement was so nascent, there wasn’t even fake news about it.

Gates is right: Change takes time, but then suddenly, it’s everywhere, and nothing is the same ever again.

How ideas and tools spread

The Bass Diffusion Curve describes how change spreads. Whether it’s a new soft drink, a political slogan, or Gordon Gekko’s brick-sized phone, it takes a while for something to catch on. At the beginning, only early adopters who can handle the risk adopt it. A fax machine isn’t much use when you’re the only person with a fax machine.

When a thing does catch on, secondary benefits emerge. This is especially true of innovations with network effects: ones that become more useful the more people use them. A few cellphones are only good for emergencies, but once there are millions of them, they change our behavior (taking calls in the car; keeping track of teenagers).

As these secondary benefits emerge, the laggards, left with no choice but to catch up, grudgingly comply. Beverage, banner, or brickphone, the pattern is always the same.

The exact shape of the diffusion curve depends on many things:

A classic example of this was the launch of Hotmail, the first real, web-based email:

The curve of Hotmail’s growth matches the first part of the Bass Diffusion Curve almost perfectly: 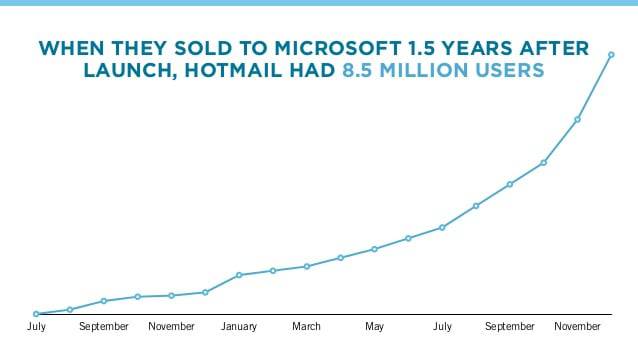 What should we build atop it?

Once a technology — or even an idea — is widespread, we can build atop it. Email, for example, is almost universal. I can email anyone with just their email address, and they can get that message from me whenever it’s convenient.

This alone is unprecedented in the history of our species, and yet we take it for granted.

Once everyone had a personal email account, we found new benefits. Today, we use email for password recovery, sharing schoolwork, storing transaction receipts, tracking shipments, and soliciting resumes. But email had to be pervasive for any of this to work. And pervasiveness takes many cycles of innovation and adoption.

It’s all elephants, all the way down.

Crises — like wars and pandemics — squeeze those adoption curves to the left. When a crisis suddenly accelerates technology adoption (such as everyone working from home and being forced to adopt, running their own video streams), then that technology attains widespread adoption far more quickly. 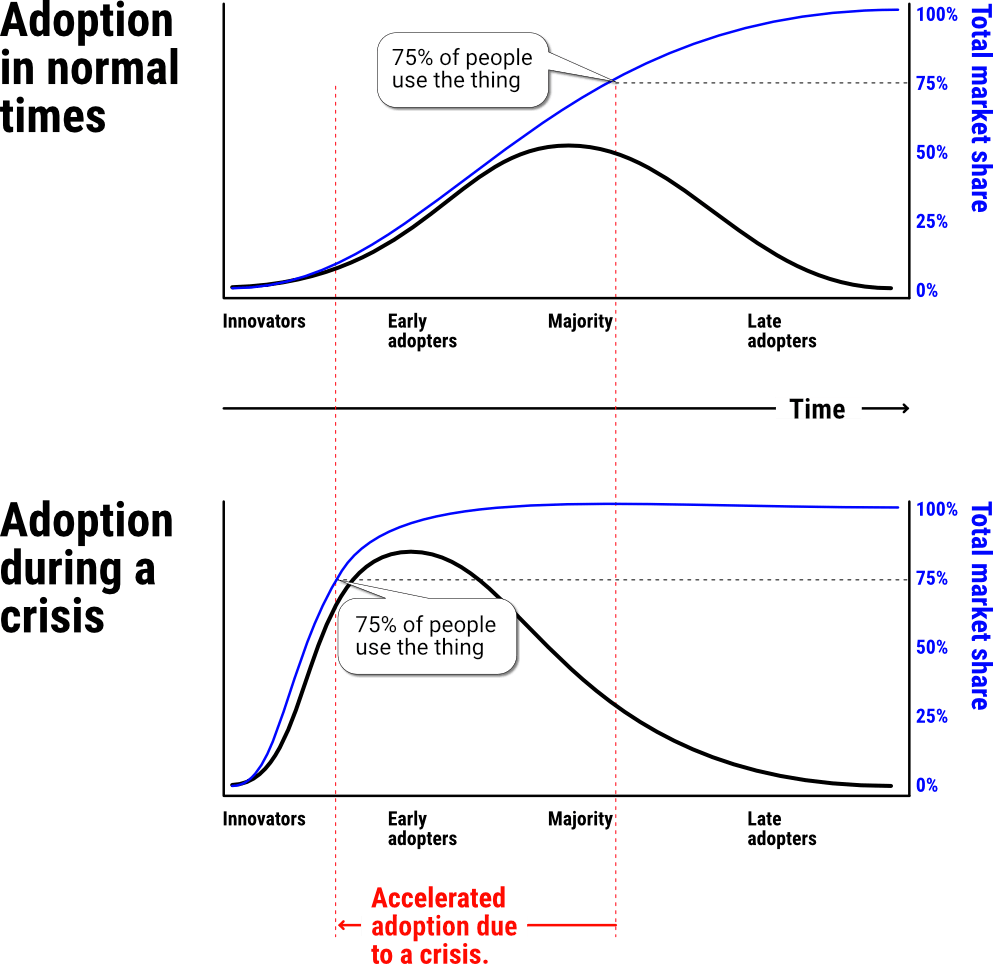 In this crisis, technologies that were still mostly bought by early adopters — from home delivery to teleworking to AI-assisted office work to offshoring to live captioning to disaster preparedness — are now, immediately, suddenly, everywhere.

A crisis makes us all early adopters.

And here’s the key: We get second-order benefits right away. A new bloom of innovation occurs, riding atop the earlier one. We get to skip a cycle.

Fixing how you meet doctors

That seems a bit abstract, so let me make it more concrete. A few days ago, I spoke with a doctor. She told me Zoom has changed her practice in ways she’ll keep from now on. The benefits are simply too great for her to go back.

As she explained to me, in a physical world, if you’re sick, you visit your family doctor and she refers you to a specialist. A pair of assistants (one for each doctor) then schedule a meeting, and you visit the specialist. You get a prescription, which you take to the pharmacy. After a couple of weeks you consult with the specialist again, then see your family doctor to discuss how things went. All the while, assistants call and text and fax one another, managing your movement through the system.

This could be far more efficient, and we could have fixed it long ago. But the underlying technologies needed to do so weren’t widely adopted. The first-order benefits weren’t strong enough to compel change. Doctors are busy and we don’t want to be rude, so we didn’t complain. The short-term benefits of telemedicine weren’t there, so it was only spreading slowly. The status stayed quo.

Except now, in this crisis, everyone’s online. Out of necessity, the doctor and specialist and patient all coordinate and get on the same call. Everything gets better: Sharing personal medical data is easier, with fewer, faster meetings. There’s less repetition and introduction. Patients actually get more time to ask questions. The second-order benefits are compelling. The world won’t go back to what it was, because these new benefits are enough to sustain it.

A crisis not only makes us all early adopters, it also makes us more risk-tolerant. In normal times, it’s often easiest to do nothing at all.

In a crisis, not acting is risky. When lives, economies, elections, and societies are at stake, we strive. We remember what it was like to be young, and eager, and not yet jaded. We let the end, for a while, justify the means. We take risks, we bend corners, we skirt regulation.

Soon, doctors will share their screens so you can all see your X-Rays, regulations be damned — after all, doctors are smart, and this crisis has given them all a crash course in Zoom. They’ll start finding new ways to collaborate. Your doctor might even share her screen and browse the web alongside you, steering you to something helpful.

That thing you pitched someone last year that colleagues ridiculed for weeks — or worse, summarily ignored? Maybe it’s salvation. Maybe you can now take the risk. Maybe its long-term benefits suddenly became short-term value. Maybe something that was abundant is now scarce, and important, and you’re really good at that scarce thing.

What resonated with me across all these conversations in the past week was this:

We need to focus on what is now possible, rather than lamenting what isn’t.

This is, for many industries, a pinecone moment. The forest floor is charred and bare. The rain falls on ash. The blackened cones yearn for the future to come sooner. 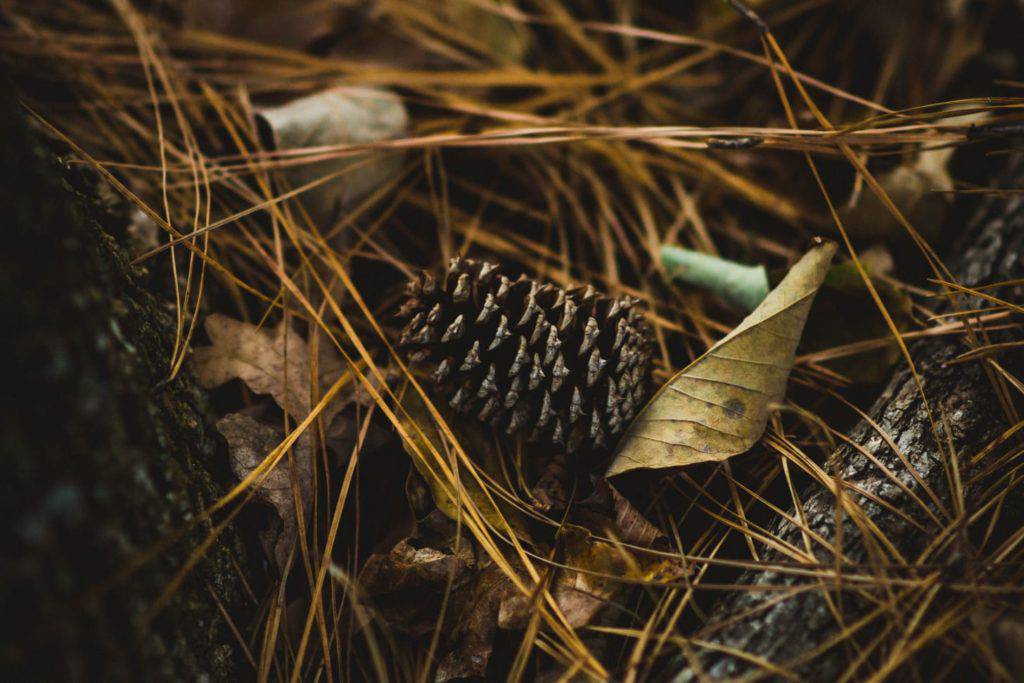 Alistair Croll has written 4 books on technology, business, and society, including the bestselling Lean Analytics. He co-founded web performance startup Coradiant, was a visiting executive at HBS, and has chaired a number of leading events including Strata, Startupfest, Scaletech, and the FWD50 digital government conference. This post was originally published on Alistair’s Substack. 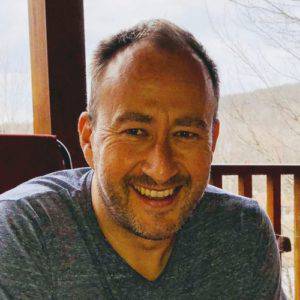