Research Brief
2092
2015 is on track for a multiyear high in startup-on-startup acquisitions.

Though the same can’t be said about startups investing in other startups, the phenomenon of a startup acquiring another startup is not new. These acquisitions often happen as startups seek to diversify into new customer segments, absorb new talent, or acquire new technology (as just some of the reasons).

Using CB Insights data, we analyzed this trend in order to identify the the biggest acquirers within private markets and to gauge whether or not this trend has accelerated recently.

Overall, the number of tech startups acquiring startups has increased significantly since 2010. That year saw fewer than 150 of these acquisitions, while 2014 saw more than 3x that number, at 530. The number was also a 44% increase from 2013.

This year we have already seen more than 450 of these types of acquisitions, putting 2015 on track for nearly 700.

This trend could be due to several factors (or a combination of them): more startups being targeted for acquihires as their growth slows, capital availability leading to more ready cash on-hand, and a general consolidation of certain industries (e.g., food delivery companies acquiring each other). Some notable exits involving two startups in 2015 include Yemeksepeti being acquired by Delivery Hero, Re/code acquired by Vox Media, and Flipkart‘s acquisition of Myntra. 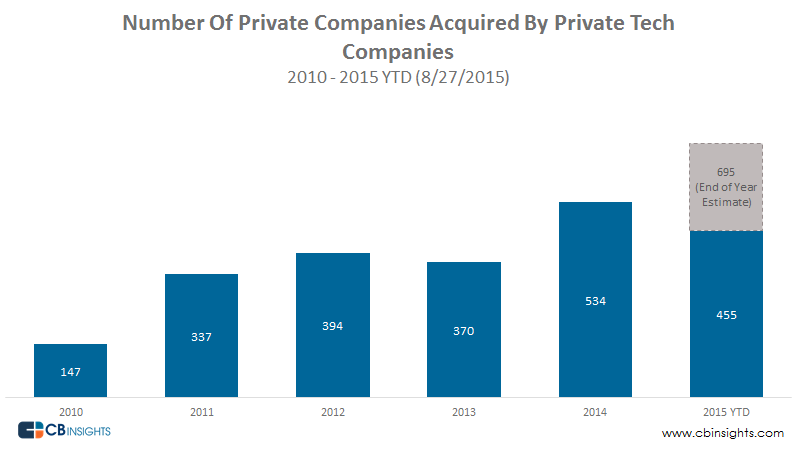 Dropbox has been the most active acquirer of other private companies, with more than 20 acquisitions since 2010, including Clementine, Umano, and CloudOn this year. Rocket Internet-backed Foodpanda and Delivery Hero have been rolling up other food-delivery startups around the world, making a combined 25 disclosed acquisitions of other private companies since 2010. Six of the companies on this list are based outside of the US, including Zomato and Snapdeal. 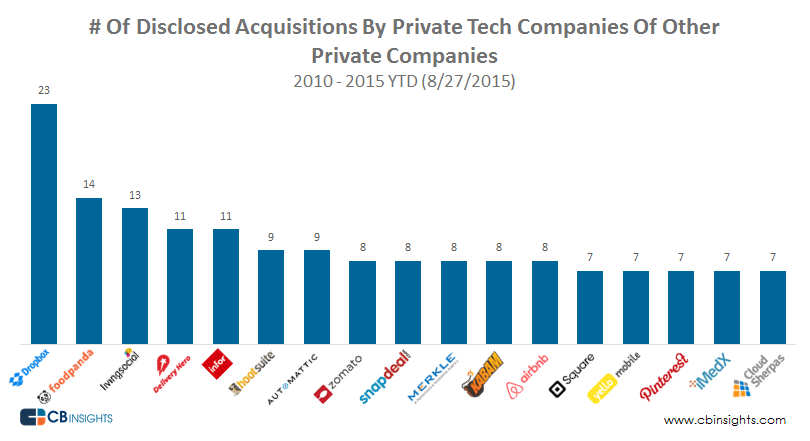 While its 23 acquisitions puts Dropbox in first place among private tech companies, we took a look at some of the larger, now-public tech companies to see how many startups they acquired before they went public.

While Twitter reached approximately the same valuation as Dropbox in private markets, it also acquired more companies, 31 in total before it went public. Twitter was private for a little more than 6 years from its first funding, compared to Dropbox which is already into its 7th year since it graduated from Y Combinator.

Facebook also acquired 23 private companies before its IPO (though Facebook had a much higher valuation). Facebook was private for a little under 8 years since Peter Thiel wrote Facebook its first check, for $500K, in 2004.

Both Zynga and Groupon went on acquisition sprees, grabbing many startups in their space (with Groupon having a particularly international focus). Recently public Zayo Group Holdings also acquired more than 10 startups before it went public. 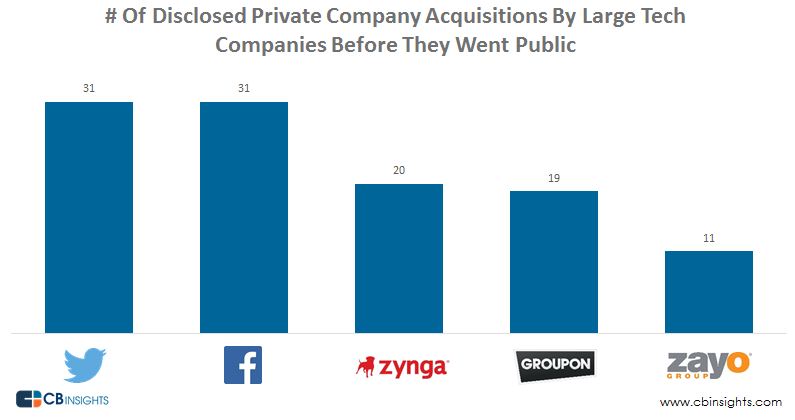 **Only company first exits were analyzed

***While we only analyzed private tech acquirers, we counted the investor-backed private companies they acquired regardless of sector in this analysis

Want more data on startup acquirers? Check out our venture capital database below.