“This is the best time to raise money ever.”

Never were truer words spoken than these by Stewart Butterfield, the CEO of Slack, who has raised 3 large financing rounds within 18 months. It’s not just about being valued at a billion dollars but doing it at ludicrous speed.

Is Slack a freak’ish unicorn or is raising a round on average every 6 months that typical?

In just another sign of the heady times we live in, it’s more typical than you’d think.

We used CB Insights data to identify 20 other U.S. startups that have done this since the start of 2013. On-demand startups such as Sprig, Instacart and Handy figure prominently on the list but the list also includes companies ranging from subscription eCommerce app Stitch Fix to customer success management firm Gainsight.

Here is the list of pre-Series E ’18-month sprint’ companies:

While all of the companies raised three institutional funding rounds in less than 1.5 years, some of the fast-raising startups saw more compressed time scales than the rest. Most notably, Yik Yak closed its Seed VC through Series B rounds (totaling $73.5M) in just 7 months. Next fastest on the list was NY-based fitness membership startup ClassPass, which raised three rounds in nine and half months, and cloud HR startup Zenefits, which closed three financings in a little over 10 months and is now rumored to be raising a giant new round at a valuation north of $3B.

The chart below highlights time between rounds for the 20 startups. 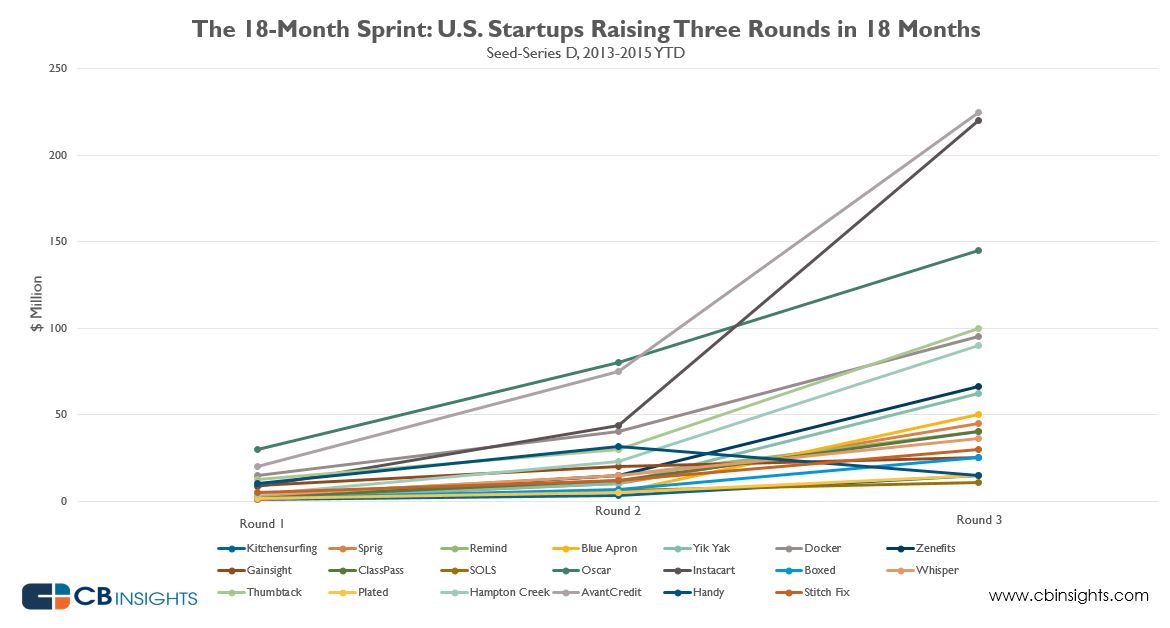