Research Brief
1404
While acquisition activity of startups acquiring other startups has not increased, valuations have.

Are startups acquiring other startups at a faster rate? According to CB Insights data, private VC-backed US tech companies are on pace for just over 280 acquisitions, with 225 already acquisitions in 2014 (we’ve assumed current run rate continues). Although the market for startups is frothy, this actually doesn’t represent an increase in  acquisition activity as startups acquiring startups has been relatively range-bound over the past few years. 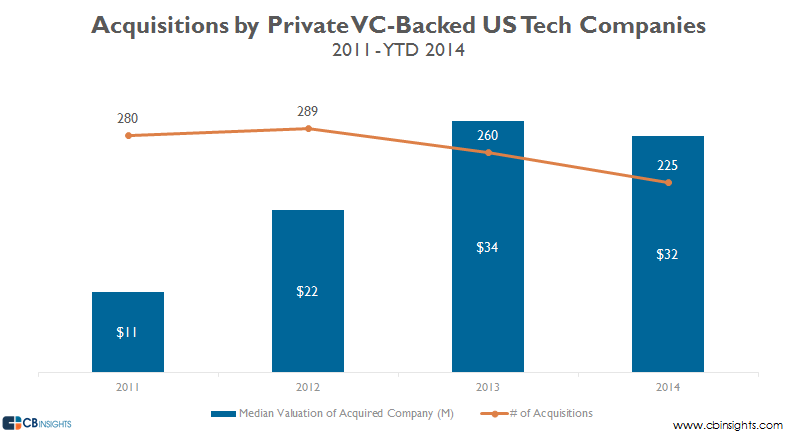 Social companies have acquired most, with over 90 acquisitions since 2010. Notable acquirers within the space include many of tech’s top public companies today, including Facebook and Twitter (who each acquired over 25 companies while private), as well as private companies such as Pinterest. 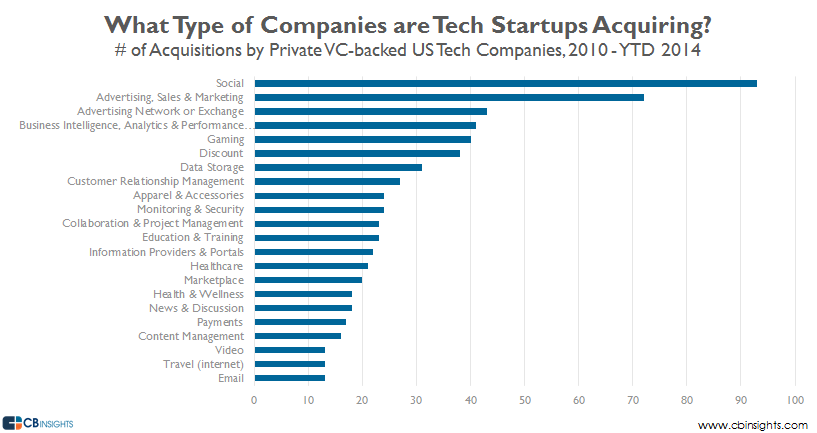 IPO-bound companies are most acquisitive

Unsurprisingly, the top 4 private VC-backed acquirers since 2010 are all companies that went on to go public. Facebook was number 1, having acquired 29 companies prior to its IPO, while Twitter and Zynga rounded out the top 3 with over 20 acquisitions each, also prior to their public offerings.

Thus far in 2014, IPO candidate Dropbox has been the most acquisitive with acquisitions of Predictive Edge Technologies, Parastructure, and MobileSpan, among others. Automattic and Handy are among the other companies to round out the top 3.

For more data about private company M&A check out the CB Insights Venture Capital Database. Sign up for free below.