The food-delivery industry is becoming increasingly crowded and as with most industries, failures will outnumber successes. Data actually can help us distinguish emerging winners and likely casualties.

Within food delivery specifically, the data suggests SpoonRocket may be on the ropes, as we detail below.

The US food-delivery space has several emerging leaders in the prepared food category such as Munchery, DoorDash, Postmates, and Sprig. Meanwhile SpoonRocket, which has raised nearly $14M from investors including General Catalyst, hasn’t kept up.

CB Insights algorithmically assesses the health of private companies and gives them a Mosaic score. You can think of it as a FICO score for emerging companies. Mosaic is composed of 3 sub-scores or what we call “the 3 Ms”:

Momentum is a particularly telling measure for technology companies as it is a proxy for product strength and traction with customers. When we compare companies in the food-delivery space based on Mosaic Momentum scores (screenshot below), we see SpoonRocket has a relatively low score of 560. Note: All Mosaic scores are on a scale of 0-1,000 with 1,000 being the highest score. 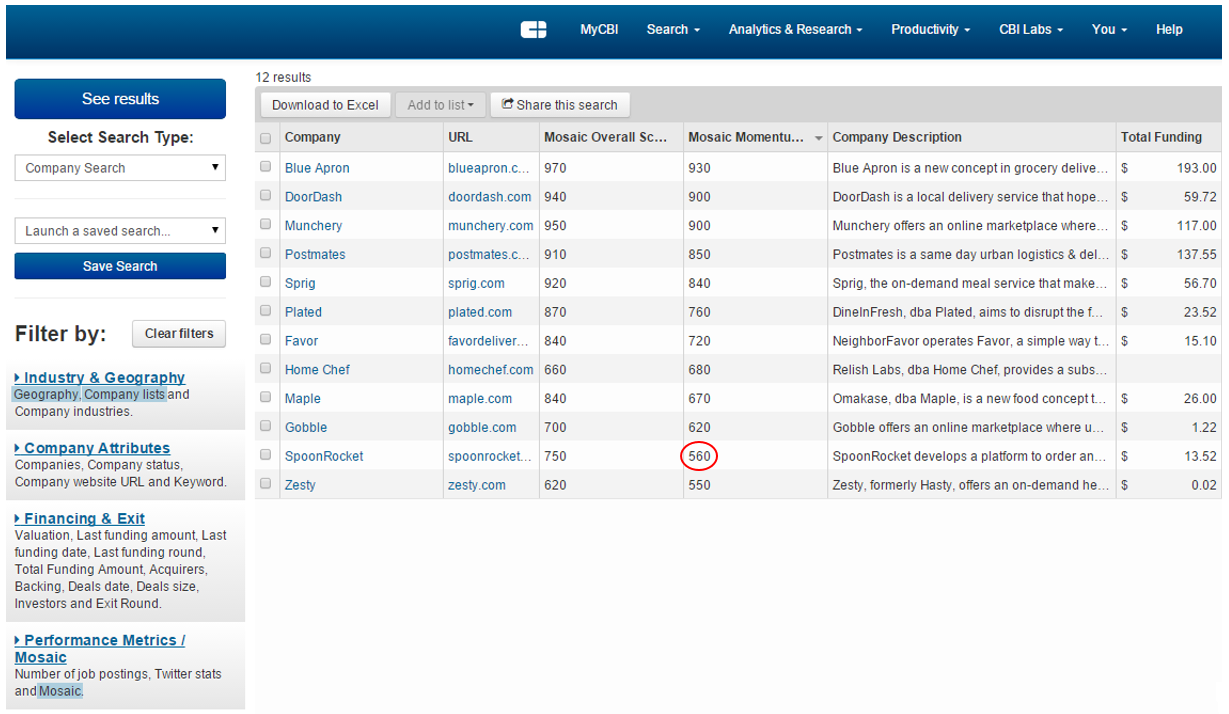 The graphics below are taken directly from CB Insights company profiles and highlight the disparity in Momentum and overall Mosaic scores between SpoonRocket and some of its better-trending peers.

Apart from momentum, there is the financial health of the company. SpoonRocket was part of Y Combinator’s Summer 2013 class, and quickly raised $2.5M in Seed financing, followed by $11M in Series A financing in May 2014. However, the food-delivery company hasn’t raised follow-on financing in over 400 days, as the funding timeline from their profile highlights.

Meanwhile, SpoonRocket’s competitors have all built up significant war-chests, including Postmates, which most recently raised $80M at a $500M valuation, bringing its total raised to $137.6M, and Munchery, which added $85M at a $300M valuation in May 2015, bringing its total amount raised to $117M. (Caviar, another competitor on the graphic, was acquired by Square for $90M in August 2014.)

When diving deeper into performance metrics (non-financial signals of company performance that feed into the Momentum score), we see SpoonRocket’s web traffic has slumped in the past year, falling from a peak rank of ~40,000 to below 100,000 today.

While many food-delivery companies rely on mobile to drive engagement and use, we view web traffic as a good proxy for overall awareness. When plotted next to Munchery (yellow line) or DoorDash (red line), it is clear that these two have broken out in terms of web traffic, leaving behind SpoonRocket (blue line). 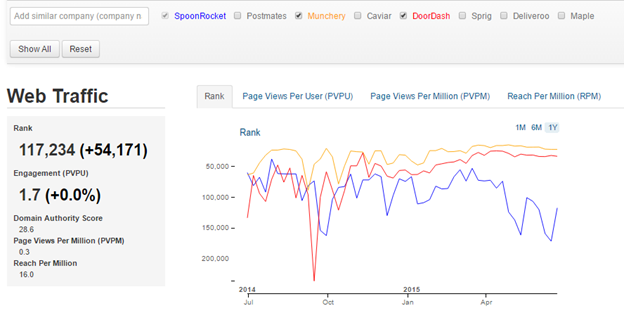 We see this same trend across social media. SpoonRocket (blue) peaked in Twitter mentions back in July 2014, however quickly lost steam as Munchery (yellow) and DoorDash (red) trended up.

Diving into CB Insights news mentions we’ve tracked, we found that SpoonRocket’s launch in Seattle was a failure. The bottom article in the feed shows SpoonRocket launching in Seattle in February 2015, while the most recent article, dated just four months later, shows that they shut down those Seattle operations. 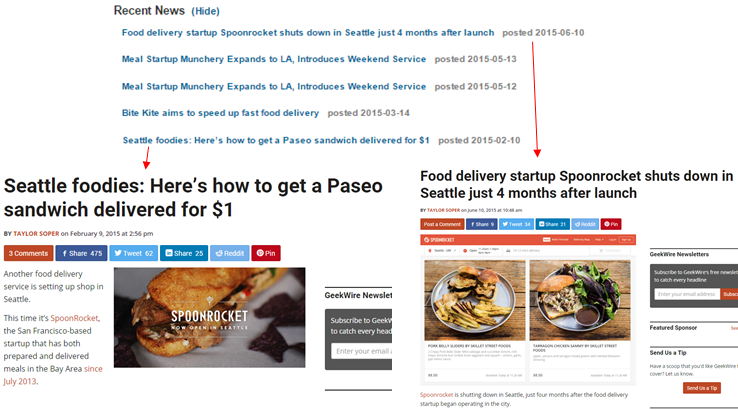 Diving in further, we take a look at CB Insights’ data on hiring activity, which is another great proxy for company growth. When comparing SpoonRocket with Munchery and DoorDash, there is once again massive disparity in hiring growth. SpoonRocket’s job listings show almost no action, with no more than one job opening in any given week, while Munchery and DoorDash have significantly more hiring activity, as can be seen in the graphs below. 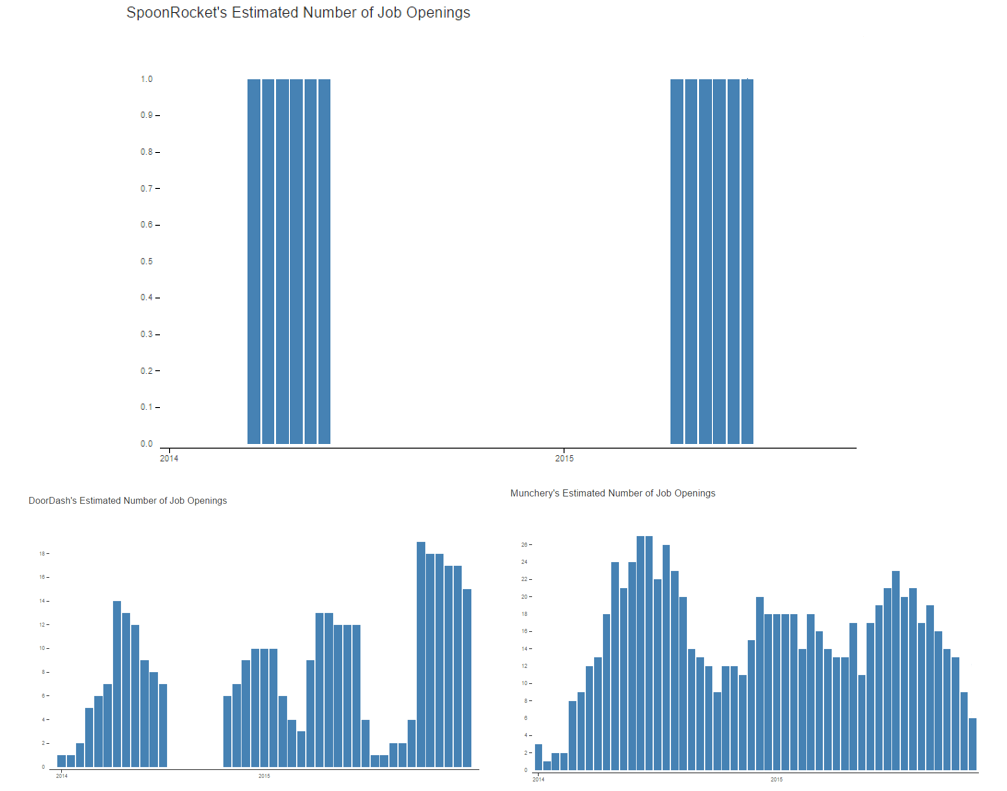 While the food-delivery industry is still in its infancy, data helps to illuminate the companies doing well and those like SpoonRocket which may be struggling.

Want to understand private company health and momentum?, login to CB Insights or sign up for free below.