Research Brief
1894
Funding to space startups in 2015 has already topped investment in the previous three years combined. Read on for the financing trends, top companies, and most active VCs.

Elon Musk’s SpaceX has dominated the buzz around private companies targeting space. But dozens of other startups have received investment: these include space-debris cleanup specialist Astroscale and satellite-imagery companies Planet Labs and Skybox Imaging (the latter was acquired by Google in 2014 for $500M).

Overall, deal activity has increased for three straight years now, with 2015 already reaching a four-year high in both deals and dollars invested into space companies at nearly $1.17B across 21 deals, largely anchored by SpaceX’s $1B Series D from Google and Fidelity Investments. 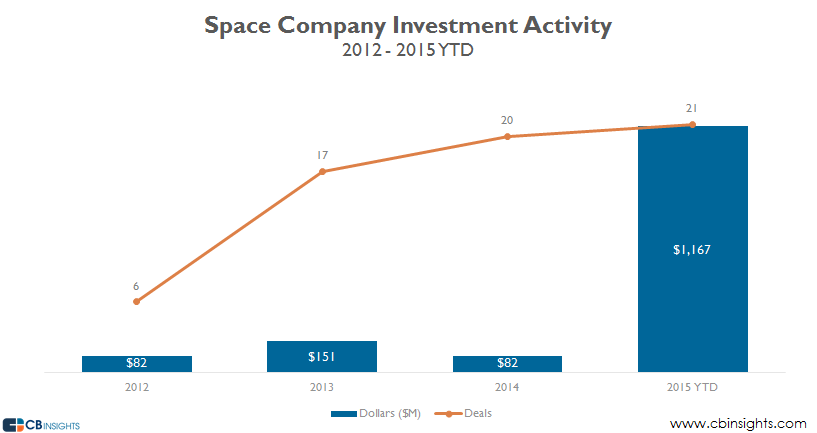 Despite the uptick in deals and dollars, just five VC-backed space companies have raised $20M or more. Musk’s space-travel startup SpaceX is far and away the leader, with over $1.18B raised to date. Planet Labs and Spire, both developing and utilizing “CubeSats,” small and affordable satellites used for imaging and data analysis, round out the top 3.

Although the ecosystem is fairly young, there are several VCs who have made multiple investments into the space. RRE Ventures has been active, with investments in Spaceflight Industries (CubeSat development & launch services), Accion Systems (satellite propulsion), and Spire in the past 12 months. In addition to RRE, Lux Capital, a firm with a heavy focus on “frontier tech” companies, has made multiple bets recently. These included investing alongside Google Ventures, Sequoia Capital, Bloomberg Beta, and citizen.vc in an $8.7M Series A going to Orbital Insight, as well as investing in Planet Labs’ $70M Series C in January 2015.

The most active investors by unique-company space investments are listed below.

Want more data on Space startups? Login to CB Insights or sign up for free below.