Research Brief
2767
In 2015, space accounted for nearly twice the funding of AR/VR and drone startups combined. This year, AR/VR startups have led the category in both deals and dollars.

Startups in frontier tech — a category that includes augmented/virtual reality, space, and drones — raised a combined $3.5B in equity financings in 2015, over a record 254 deals.

Because funding trends to these emerging tech areas were variable (dollars to AR/VR startups, for example, slowed in 2015), we used CB Insights data to see which industry categories were making the biggest impact.

We found that space startups dominated the funding picture in 2015 on the back of a few $100M+ mega-deals, while AR/VR dominated deals and funding in Q1’16.

Given the capital-intensive nature of sending rockets into space, this is rather unsurprising. The three largest frontier tech deals in 2015 were to space companies including SpaceX’s $1B Series D, OneWeb‘s $500M round, and O3B Networks‘ $460M Series H. 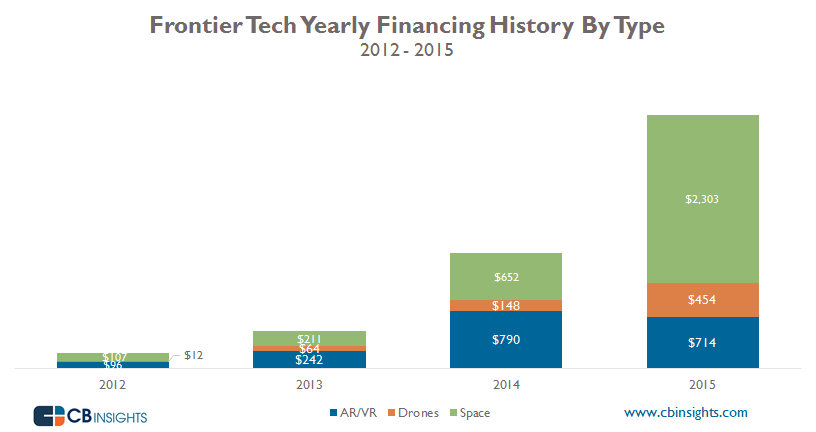 All of the frontier tech categories have seen a steady increase in deals year-over-year since 2012, with AR/VR, in particular, growing fastest. Deal activity to AR/VR grew by 122% in 2015 from the year prior, which was one of the largest jumps in deal volume for any of the 3 frontier tech industries.

While space drove the majority of the funding total in 2015, it was occurring over relatively few deals. The category saw 44 deals last year, which translates to 63% growth year over year. 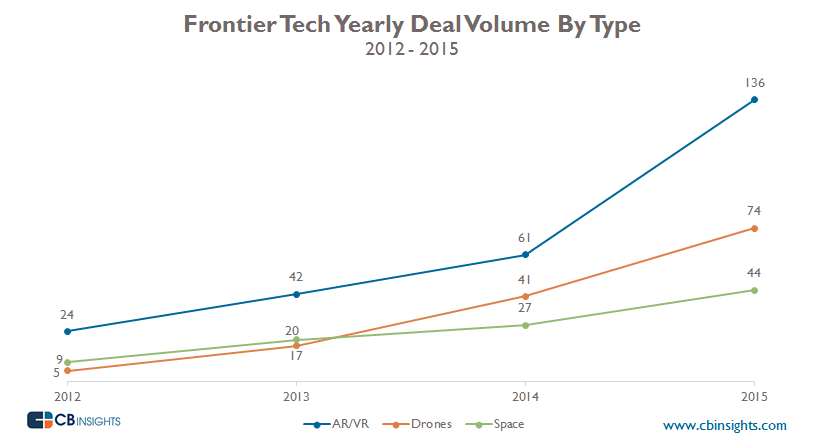 Looking at quarterly trends, a drop-off in funding for all frontier tech categories becomes apparent in mid-2015. The bowl-shaped funding trend says it all: investors clamped down on frontier tech startups in Q3’15, when total funding dropped by 58% quarter-over-quarter.

Immediately following that, Q4’15 and Q1’16 rallied back and nearly equaled the funding totals seen at the beginning of 2015. Due to a peak in AR/VR funding fueled mainly by Magic Leap‘s massive $793M Series C, Q1’16 saw 45% growth in funding quarter-over-quarter for the frontier tech category overall (and 347% growth in dollar funding to AR/VR). 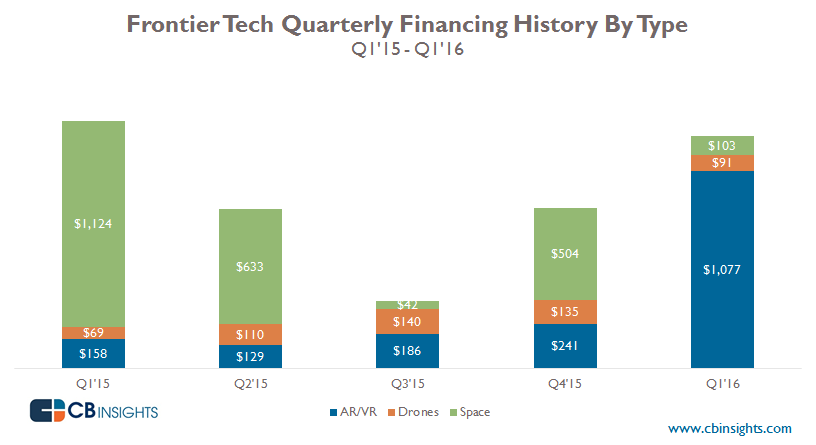 Deal volume also saw a mid-2015 slowdown. In aggregate, deals fell by 19% in Q2’15. Since that dip, however, overall deal activity rebounded.

For the past 3 quarters, AR/VR has fueled more deals than space and drones combined. In Q1’16, however, AR/VR deals fell to 42, a 9% drop quarter-over-quarter.

Interestingly, deals to space companies have been slowing down significantly. Only 7 space deals occurred in Q1’16 compared to 13 and 12 deals in Q1’15 and Q2’15, respectively. 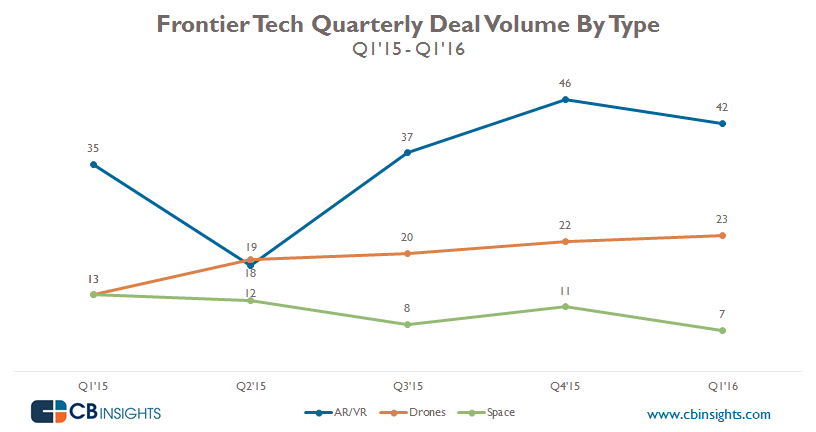