We dig into Southeast Asia's burgeoning tech ecosystem, from financing trends by country to major investors making bets in the region.

While Southeast Asia often gets classified as a single, homogenous region, the dynamics in each country within the region are extremely varied.

Singapore is one of the world’s wealthiest country-states. Indonesia, despite having the highest GDP of countries in Southeast Asia, is home to a large unbanked population, with many people still relying heavily on cash. In 2017, the Philippines — despite an unpopular president and political unrest — was highlighted by Forbes as the 10th fastest-growing economy in the word. 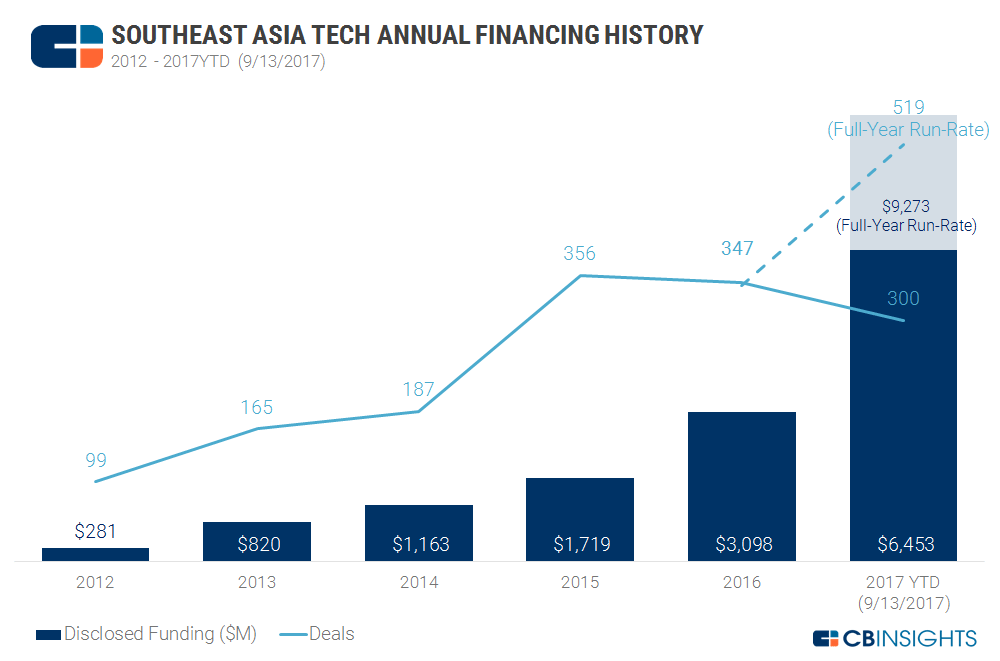 Funding numbers in 2017 have been buoyed by a number of $100M+ mega-rounds, some of which are the biggest rounds to a Southeast Asian tech companies to date.

Another ride-hailing company to raise a notable mega-round was Indonesia’s GO-JEK, which raised a $1.2B Series C in Q2’17 from Chinese tech giants Tencent Holdings and JD.com. Indonesian travel bookings site Tokopedia raised a $1.1B Series F from Alibaba Group in Q3’17.

From 2012 – 2017 YTD, Singapore has attracted the most investor money of all countries in the Southeast Asian region. Investment totals have reached over $7.2B to Singapore-based tech startups, with the second most active country, Indonesia, clocking in at $4.6B. 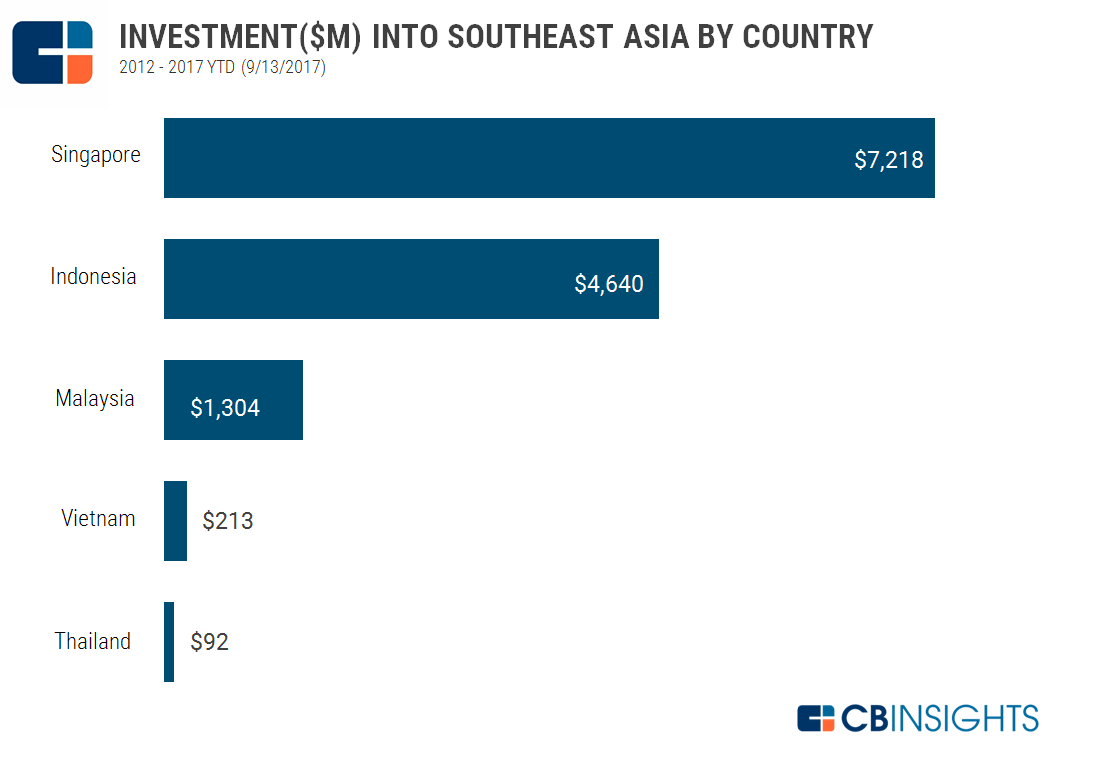 While still lagging Singapore, activity in Indonesia has recently picked up the pace, propelled in part by a few of the mega-rounds highlighted above. Indonesian tech startups have raised nearly $3B in funding in 2017 YTD alone, on par with Singapore’s $3.1B raised this year.

Indonesia’s 2017 funding numbers are boosted in part by the above-mentioned mega-rounds, which were among the largest rounds ever to the region: the $1.2B Series C to GO-JEK and the $1.1B Series F to Tokopedia.

Thailand, in fifth place, has raised a large chunk of its total funding in 2017: $78M of its total $92M raised (or 85% of total funding) has been raised this year to date. Noteworthy recent deals to Thai startups include video livestreaming platform Kitty Live‘s $21 Series A in Q1’17 and e-commerce startup Zilingo‘s $18M Series B in Q3’17.

Other countries have seen funding fall off. Although Vietnam’s funding total since 2012 is $213M, making it the fourth most well-funded country in Southeast Asia, in 2017 YTD startups in Vietnam have raised less money than either Thailand and the Philippines. Vietnam’s two biggest rounds to date were both closed in 2016: a $28M Series B to e-wallet MoMo and a $17M Series C to e-commerce site Tiki. 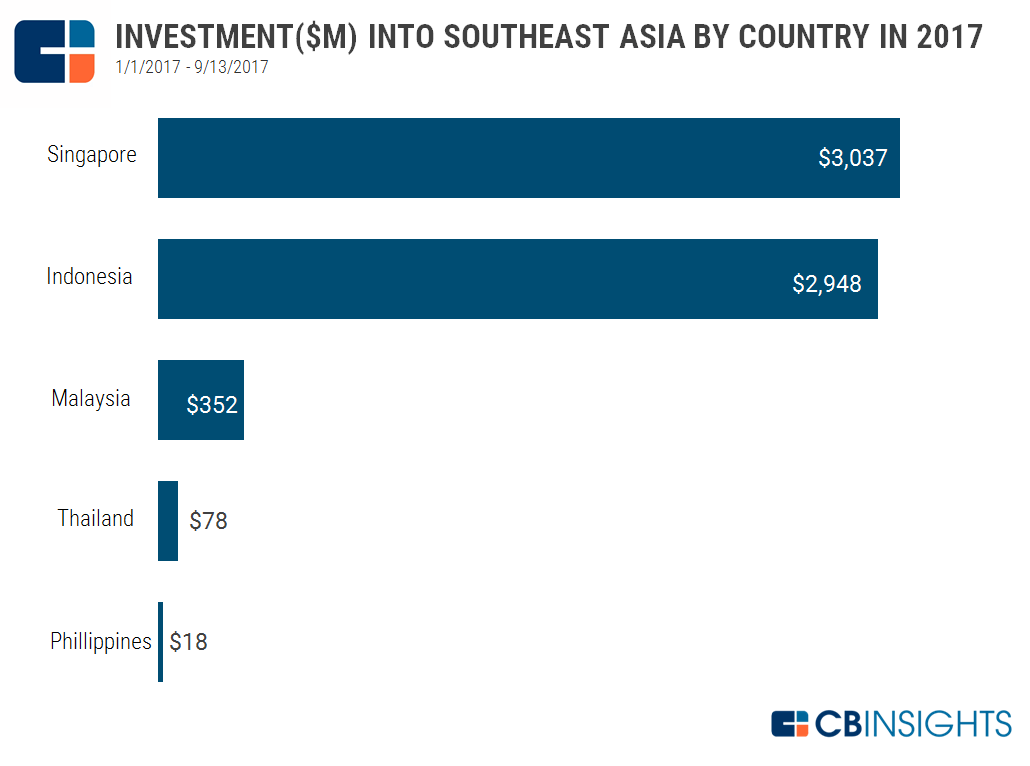 Deal activity followed a similar pattern as funding, with Singapore taking the lead in the number of deals it has closed since 2012. For overall deal activity, Vietnam did not rank in the top five.

Despite raising just $18M in funding since 2012, however, the Philippines saw significant deal activity, closing 100 deals over the years. This was just 14 fewer than Thailand, which has closed 114 deals totaling $92M. 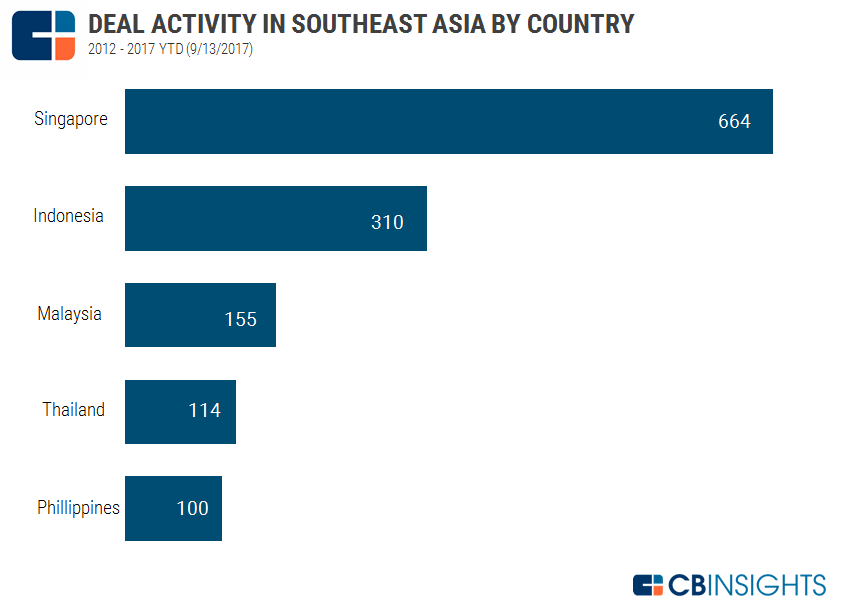 The Philippines has seen increased activity in recent years, with major deals in 2017 including a $9.7M round to online pawn shop PawnHero and a $5M tranche of Series A financing from South Africa’s Naspers to bitcoin e-wallet Coins.ph. In 2017 YTD, the region has closed 24 deals.

Social media: With a massive boom in smartphone usage, social media in Southeast Asia is a major trend, with Indonesia leading the way. Instagram’s most popular geo-tagged city is Jakarta, Indonesia. In 2012, Jakarta won the title of “Twitter City” for having posted the greatest number of tweets of any city in the world.

Earlier this month, Chinese unicorn ByteDance — a startup similar to Musical.ly in that it lets users post short videos — expanded into Indonesia with the launch of local app Tik Tok. In Q2’17, Singaporean dating app Paktor merged with Taiwanese startup 17Media to add live-streaming and content production to its list of offerings.

Payments: Another emerging trend is an increase in payments startups attempting to provide many of the same services as banks — including holding money, digital payments, and remittances.

According to the World Bank, only 27% of people in Southeast Asia have a bank account — a number that falls as low as 5% in countries like Cambodia. Startups in the payments space have the potential to offer financial services to a largely underbanked population.

Filipino company Coins.ph runs a bitcoin wallet that focuses on improving ease and efficiency of remittances sent between countries, while Singapore-based InstaReM claims to charge lower fees for remittances than traditional services like MoneyGram or Western Union.

In July 2017, Thailand-based payments solution Omise raised $25M in an ICO intended to help build out Omise Go, which its cryptocurrency-powered e-wallet and cross-border money exchange. Omise has also raised $20.4M in traditional disclosed funding, and its backers include 500 Startups and East Ventures.

E-commerce: Another trend is the rise of niche e-commerce sites. Despite the existence of local, well-funded e-commerce sites (such as Tokopedia) and the entrance of marketplace giants into the region (like Chinese tech giant Alibaba’s purchase of Singaporean e-commerce retailer Lazada last year), investors have continued to fund sites that sell specific goods.

In Q3’17, fashion & lifestyle marketplace Zilingo raised $18M in a Series B round from Sequoia Capital India and Burda Principal Investments, among others. In the same quarter, Indonesian fashion startup Sale Stock raised a $27M Series B.

Muslim apparel site Muslimarket raised a Series A from 500 Startups, among other investors, in Q2’17, while Qlapa, an Etsy-esque marketplace for handmade products, raised a Series A in Q1’17 from Aavishkar and KapanLagi Network.

Both companies also have dedicated fintech offerings: GO-JEK with the popular Go Pay, and Grab with GrabPay. Grab has also bought online-to-offline fintech startup Kudo, which lets customers deposit cash at kiosks and put it into their wallet.

GO-JEK, which is backed by WeChat operator Tencent, is also moving toward multi-platform capabilities that are comparable to WeChat. It delivers food with Go Food and even delivers massages to parts of Jakarta with its on-demand spa Go Massage.

The most active investor in Southeast Asia since 2012 is 500 Startups. The early-stage fund has closed more than 200 rounds in Southeast Asia, backing startups including Singaporean consumer-to-consumer marketplace Carousell and Indonesian offline-to-online fintech startup Kudo.

In second place is Japan-based VC firm East Ventures, which has participated in over 90 deals in the region. It was an early investor in Indonesian booking site Traveloka, which has raised $500M in disclosed funding over the past year. Traveloka’s other investors include Expedia, Chinese e-commerce site JD.com, and Sequoia Capital, among others.

Conglomerates owned by some of Southeast Asia’s richest families are also active in the region’s tech ecosystem, each with different strategies.

Indonesia’s Sinar Mas Group, which is founded by Eka Tjipta Widjaja, ranked the fourth richest man in Indonesia in 2016, has launched its own investment arm: Sinar Mas Digital Ventures. The firm has invested in 7 companies in Southeast Asia to date. Sinar Mas Group has also invested in Thai venture capital firm Ardent Capital.

Another active conglomerate is Ayala Corporation. (The Ayala family was ranked 5th on Forbes Phillippines’ 50 richest list in 2017.) Ayala Corporation is a principal shareholder in Globe Telecom, which operates Kickstart Ventures as a corporate venture capital carm.

Kickstart has invested in 19 companies across the region, including participating in a $5M Series A to Filipino bitcoin wallet Coins.ph. Ayala Corporation also invests in startups directly. It took a minority stake in Globe Telecom-owned Mynt along with Ant Financial Services in Q1’17. In the same month, Ayala, Kickstart Ventures, and BPI Capital (the investment banking subsidiary of the Bank of the Philippine Islands) came together to take a 49% corporate minority stake in fashion and footwear e-commerce site Zalora Philippines.

There also has been an increased presence of Chinese tech giants investing in the region. 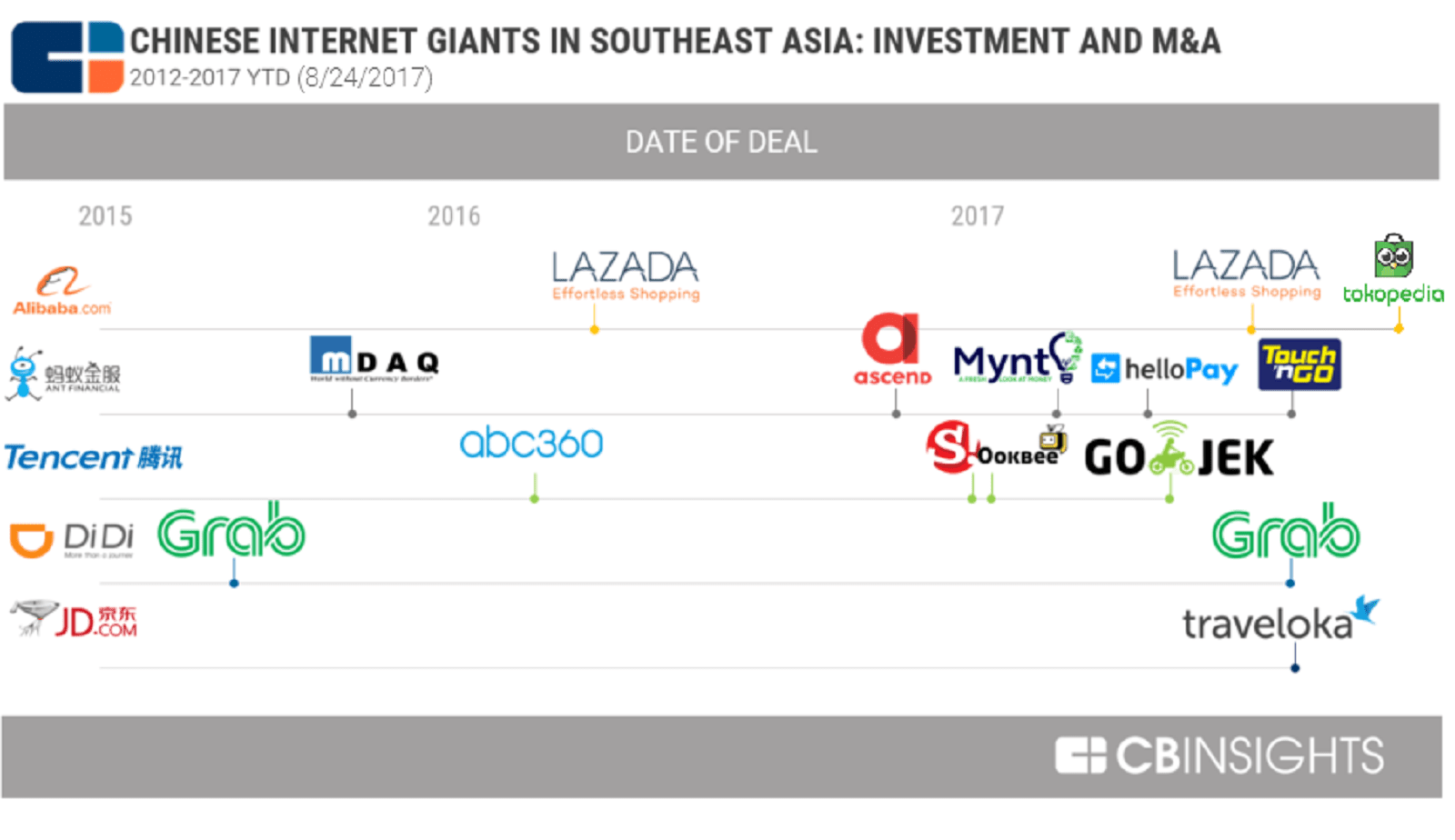 Alibaba has been active in the region, both as Alibaba Group and though its financial arm, Ant Financial.

Alibaba Group has made two investments in Singapore-headquartered e-commerce site Lazada. First, in Q2’16, it invested $1B in Lazada, valuing it at $1.5B. In Q2’17, it upped its existing 51% stake to 83%, giving Lazada a valuation of $3.2B.

In August 2017, Alibaba Group also pumped money into travel bookings unicorn Tokopedia, participating in its $1.1B Series F round.

While acquisitions in Southeast Asia are still gaining traction, a few firms have been leading the way.

Publicly held Filipino tech company Xurpas tops the list, with six acquisitions of Southeast Asian tech firms since 2012. Four are based in the Philippines, including Yondu, an IT software development company, that it bought for $19.2M.

Xurpas’ latest acquisition was in Q4’16, when it bought Singaporean mobile ads and marketing company Art of Click.

Another active acquirer is South Korean unicorn Yello Mobile, which operates as an umbrella company that buys mobile startups and allows them to continue to exist independently. In Southeast Asia, the company has made five acquisitions: two in Indonesia, two in Thailand, and one in Singapore.

Of the acquired companies, 4 operate in the ad, sales, and marketing industry, including Thailand-based online marketing company Adyim.