That bucks the trend globally and in other Asian markets, where deal count dropped in the quarter.

In the KPMG and CB Insights 2015 Venture Capital Report, we dug into global investment data including regional looks at Europe, Asia, and North America, as well as analyses of the funding climates in sub-regions like Southeast Asia.

Taiwan-based smart scooter manufacturer Gogoro bagged the top deal in Southeast Asia in the last quarter: a $130M Series B round backed by investors including Panasonic Ventures and the National Development Fund.

This was followed by Singapore-based ASLAN Pharmaceuticals’ $34M Series C round, which saw funding from investors including BioVeda Capital, Cenova Ventures, Morningside Group, and Sagamore BioVentures. (The company also raised $9M in additional funding this year.)

Singapore saw the most VC activity of any market in the region, with $89.4M invested across more than 20 deals. Malaysian startups raised $9.1M in the quarter, and Indonesian companies raised roughly $10M.

The average deal size in Q4’15 was only $4M, compared to $22M in Q4’14, indicative that the last quarter was marked by more frequent, but significantly smaller deals in Southeast Asia. 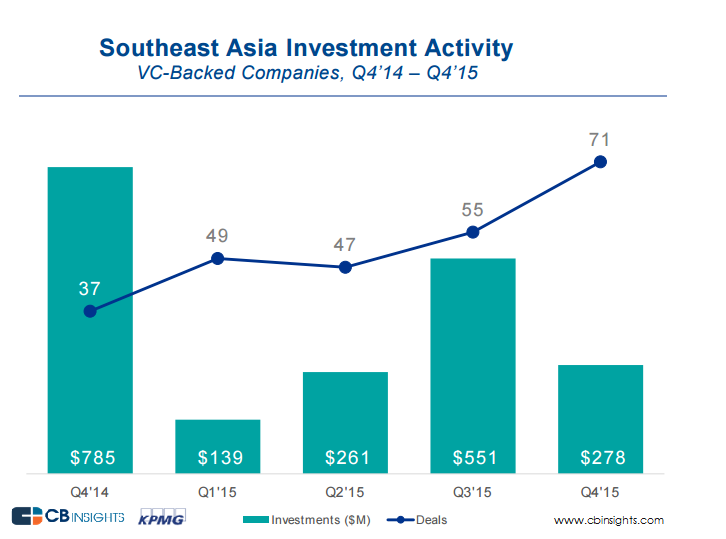