In order for solar energy to fulfill its much-hyped potential and replace "dirty" energy, better storage solutions are critical.

Solar energy continues to gain ground on non-renewable energy sources such as coal. However, there are still major technological hurdles holding solar back from becoming a more widespread energy source.

One of those challenges is storage — the ability to save unused solar energy and access it on demand.

Today, most energy storage projects use lithium-ion batteries, which have seen their price fall to nearly half what they were in 2014. Lithium-ion batteries have a longer lifespan and require less maintenance than conventional lead acid batteries. They also hold up better in colder environments.

Tesla Powerpacks are also being used in other renewable energy sources, like wind. The Powerpack already powers a 129 MWh (megawatt-hour) storage system in South Australia. The system connects to a wind farm in Hornsdale, which is owned by French solar and wind company Neoen. The Powerpack helps the state power over 30,000 homes with stored wind energy at any time. The system uses the world’s largest lithium ion battery.

In October 2017, Tesla won a contract to help store solar, wind, and other forms of energy at a hybrid renewable site in North Queensland.

Pictured here is a patent filed by Tesla for the Powerpack. It was originally applied for in September 2015, and then updated and re-filed a year later, in conjunction with the Powerpack’s second generation.

The focus of the patent is “scalability and flexibility.” In a statement released with the application, Tesla explains that many attempts at storage arrange batteries in inconvenient ways.

Instead, Tesla’s Powerpack clusters cells into pods. The pod arrangement allows Powerpacks to utilize batteries of different types, ages, voltages, and chemistries. A typical Powerpack contains 16 battery pods, a thermal control system, and sensors that track and report on the performance of cell levels.

On the smaller scale, Tesla also provides a solar storage solution for homes, the Powerwall. Users can draw energy from their solar grid and release that energy during the day. A Tesla Powerwall 2 with a 14kWh battery and an integrated invertor costs ~$5,500. The company acquired solar cell production company SolarCity in order to produce them.

While Tesla’s storage solutions have gotten a lot of the recent attention around new renewable technologies, a surprising player also recently entered the fray.

IKEA recently released a lithium-ion personal battery, citing a stat that homes that have solar panels but don’t own storage options use only 40% of the electricity that they’ve gathered from the sun. The IKEA battery pack is powered by Solarcentury, which is considered the UK’s largest solar producer. It’s only available in the United Kingdom.

One of the key drivers helping push innovation and adoption of new battery technologies is a sharp decrease in price. However, even as price wars have driven down the price of batteries, the cost of actual materials have only shot up — in price and in environmental toll.

Existing lithium mines are at risk of depletion, and while new mines are being planned, lithium extraction is time-consuming. Many of these will take several years to get off the ground, and until they’re complete, lithium prices will only get higher. However, experts believe that the price of lithium will peak out sometime in 2018, after which it will level out.

Places like the “lithium triangle” — an expanse of land that overlays Argentina, Bolivia, and Chile — are attracting big investments. Estimates peg the amount of lithium held in this triangle at anywhere between 54% and 66% of the world’s reserves. However, despite lithium ion’s packaging as an ecofriendly alternative, the material has taken an environmental toll on the regions that it’s mined in. Local communities in the lithium triangle are fighting against the industry’s usage of water and land.

Cobalt, which is an important element in lithium-ion battery creation, comes with its own issues. It has a supply chain that’s linked with artisanal mines, which are often unregulated and operate illegally.

Particularly in the DR Congo, which is the source of most of the industry’s cobalt, the increasing demand for the material paired with a lack of transparency in how it’s mined has paved the way for inhumane child labor practices, occupational health and safety hazards, and modern slavery. Many phone and battery-makers who also use lithium-ion batteries have started pushing back against these practices, including battery maker LG Chem, which claimed to have stopped buying mines sourced in the Congo in 2015.

Molten materials, which are reduced from solids to liquid by high heat, have emerged as alternatives to typical batteries. Molten salt and molten silicon are two such technologies. One advantage they have is that they can distinguish between collecting energy — warming up a system in the morning when the sun comes up — and distributing it.

SolarReserve, a California-based company that develops large-scale solar projects across the world and has raised over $980M in funding, has pioneered a technology that uses molten salt to store energy. 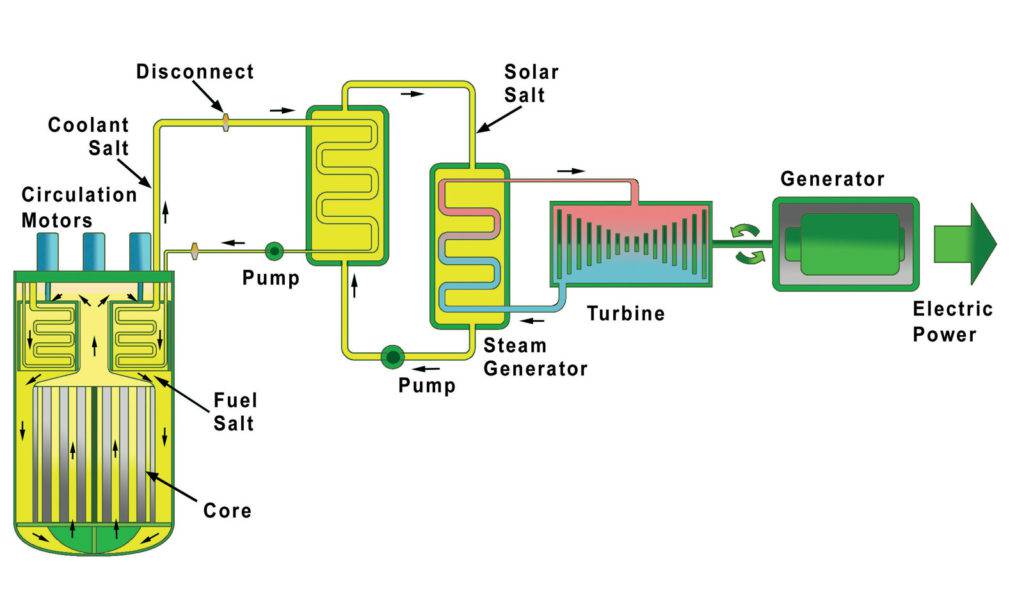 First, sunlight is reflected by a field of sun-tracking mirrors that direct and concentrate the radiation onto a receiver. Molten salt moves through tubes in the receiver and collects this energy. The salt is a mixture of sodium nitrate and potassium nitrate and is assumed to be environmentally friendly. The molten salt containing the energy is then redirected to a tank that holds it at atmospheric pressure.

Molten salt is attractive as a solar storage option because it can hold thermal energy effectively with minimal losses. It’s operational at very high temperatures, which allows it to be naturally compatible with steam turbines. It doesn’t need to be replaced during the entire lifecycle of a utility plant, which can go past 30 years. Generally, molten salt is used at 565°C.

These plants can operate 24/7. SolarReserve’s Crescent Dunes plant, in Tonopah, Nevada, is the first commercial plant in the United States using this technology. It has a project in South Africa’s Northern Cape province scheduled for 2018. 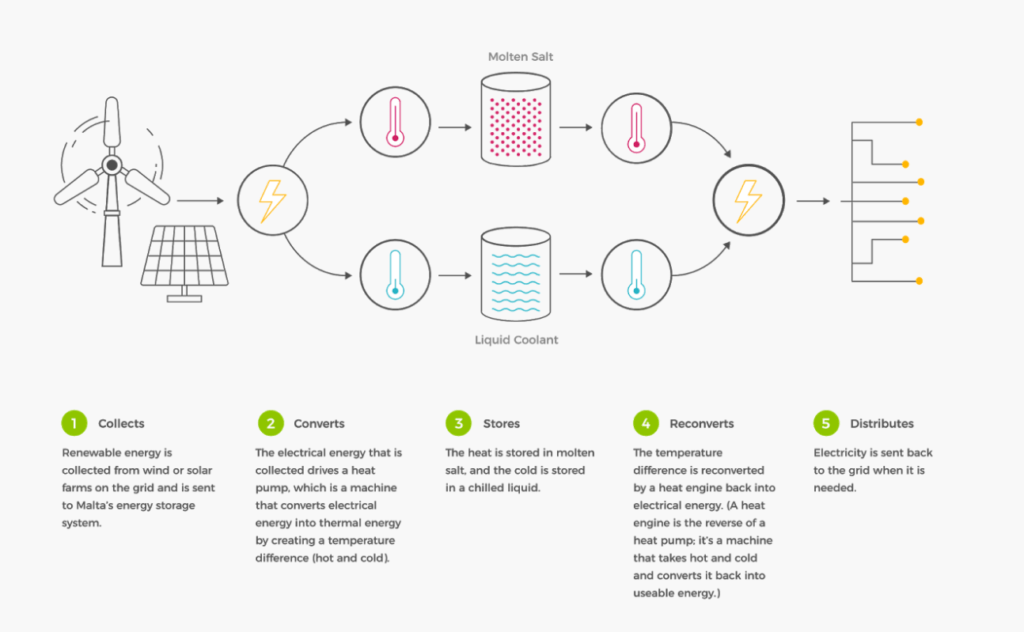 Alphabet’s molten salt storage project, MaltaX, which is the “moonshot” division of Alphabet, has announced plans to create a technology similar to molten salt.

Known as Malta, the project takes the molten salt concept a step further. It uses four tanks, two of which are filled with molten salt, and the other two with antifreeze or another type of hydrocarbon liquid (molecules of hydrogen and carbon that occur as gases at atmospheric pressures and liquid at higher pressures).

Energy is taken in as electricity and diverted into two streams of hot and cold air. While the hot air warms up the salt, the cold air cools down the antifreeze. Malta will also have an engine attached that will reverse the process, causing the hot and cold air to move toward each other and meet. This creates a gust powerful enough to spin a turbine and release electricity when need be.

That said, with the price of lithium ion batteries in rapid decline, molten salt will struggle to compete as a viable form of energy storage.

Some also fear that molten salt may not be abundant enough of a resource to entirely replace lithium-ion batteries. Instead, companies are focusing on other similar substances with high heat-holding capacities.

Molten silicon is an emerging alternative.

Silicon is the most abundant element in the Earth’s crust. Solar energy is stored at 1400°C in molten silicon and can store upwards of 1MWh of energy in a cubic meter. The harsh conditions require thermophotovolatic cells, which can convert the incandescent radiation — light that’s emitted due to being heated — into energy.

While not a new technology per se, metering has emerged as way for governments to encourage storing solar energy. Shared grids collect unused solar energy that can be utilized when needed.

Net metering: Net metering allows homeowners with solar panels to send extra energy they’ve produced to be stored in a grid. They can pull energy from it when need be.

Utility companies pay for returning this energy to customers, often at costs that are significantly higher than if these companies were to purchase this energy independently. Known as a Feed-in Tariff (FiT), they’re required to pay back customers for any electricity that’s been fed back to the grid but has gone unused.

Gross metering: Unlike net metering, which only sends a certain portion of energy to the grid, gross metering sends all of the solar energy produced in a home directly to a shared grid. From there, residents pay for the energy that’s imported from the grid, usually at a price that’s lower than what they’ve sold it for.

While molten salt and lithium-ion batteries remain the two most popular methods of storing solar energy, other attempts at reinventing solar storage have emerged. Not all of them have succeeded.

Airthium: France’s Airthium, a graduate of Y-Combinator’s class of 2017, has created a technology that stores heat at 500°C in affordable materials. Electricity powers a heat pump to create the energy. When electricity is needed, the heat pump becomes a heat engine that can convert the heat back into electricity.

SunPower: In October 2017, publicly-listed SunPower’s Oasis Power Plant platform was used to build a 28MW photovoltaic plant with a 20MW energy storage system in Kaua’i, Hawaii. The project was developed by AES Corporation, which develops, owns, and operates utility-scale power plants. AES claims that this project will be Hawaii’s largest utility-scale solar-plus-storage yet.

Solar thermal peaker plants: Peaking power plants, also known as peakers, only run when there is high, or peak, demand for electricity. This method was once a way to get around the lack of stored energy. These systems usually operate with gas turbines that burn natural gas. Since energy is only taken occasionally from peakers, it’s charged at a much higher rate.

Recently, however, regulators have begun moving away from peaker plants. In California in September 2017, the Public Utilities Commission rejected a refurbishment to a peaker plant in southern California, explaining that it went against its goals to reduce reliance on fossil fuels.

The need for immediate amounts of electricity is still present, however. Some have proposed the idea of peaker plants that use solar energy.

These would exist best with technology that delivered concentrated solar power (CSP). CSP systems use mirrors and lenses to concentrate large swaths of sunlight onto small areas. However, the amount of solar energy that would be required to adequately store and distribute it at times of need is high. Hank Price, CEO of Solar Dynamics, puts it at roughly three times as much storage and three times as much power generation for a single solar field.

Flywheels: Historically, flywheels have been used as energy sources. By spinning a heavy disk or rotor at a high enough speed, the technology uses the rotational energy produced to discharge electricity.

That said, there have already been a number of flywheel storage failures, including Beacon Power, which manufactured grid-scale flywheels and filed for bankruptcy in October 2011.

Boston’s Helix Power also attempted to produce flywheels at a lower cost — $300K per megawatt-hour — but has since shut down, stating that it was unable to raise the required funds to bring its technology to market.

More recently, in November 2017, Amber Kinetics partnered with Elemental Excelerator to install a 4-hour flywheel energy storage system in O’ahu, Hawaii. The project is funded by Elemental Exclerator and Hawaiian Electric. The rotating mechnical device is able to store and release energy and has a service life of over 20 years. Amber Kinetics is part of Elemental’s 2013 fall portfolio. It’s expected to start operations in early 2018.

But Amber has also seen its fair share of troubles. In September 2017, the company sold off Energy Nuevo, a 20 megawatt project in California, claiming that the development of the project was expensive. CEO Ed Chiao also said that the company planned to instead invest that money in creating new technologies for deployment in 2018.