Deals to solar startups are on track to hit a record high this year, despite annual funding heading toward a third-consecutive slump.

The solar energy sector has experienced a turbulent decade, with ups and downs that have earned the industry the nickname of “solar coaster.”

A few key factors have contributed to this volatility. For one, solar panel manufacturing has become commoditized, leading to fierce competition and a seemingly endless price war for cheaper and cheaper solar panels. Subsequently, companies are often priced out. One major example is solar panel and mount manufacturer Solyndra, which shut down in 2011 after raising over $1B in funding.

Shifting government attitudes toward solar energy have also impacted the space. While the costs of solar energy have improved dramatically in recent years, incentives still play a vital role in many region, and recent discussion of a possible tariff on solar panel imports has again created turmoil in the industry.

Using CB Insights data, we took a closer look at funding trends to private companies in the solar industry and highlighted the sector’s largest deals to date.

We define the solar industry to include startups installing and maintaining solar technology, operating marketplaces that connect users with local solar projects, creating and distributing solar-powered products, and innovating on solar power components like solar cells.

The solar industry has yet to bounce back to the record funding levels of 2014, when disclosed equity funding to solar startups hit a high of over $2.1B.

Despite a funding slowdown, however, the industry has also seen a recent uptick in deal activity, with 2017 on track to hit high of 127 deals — up 34% from 2016. Early-stage deals in particular have grown, taking up an increasingly larger share of deal totals, while later-stage deals have dropped in popularity. 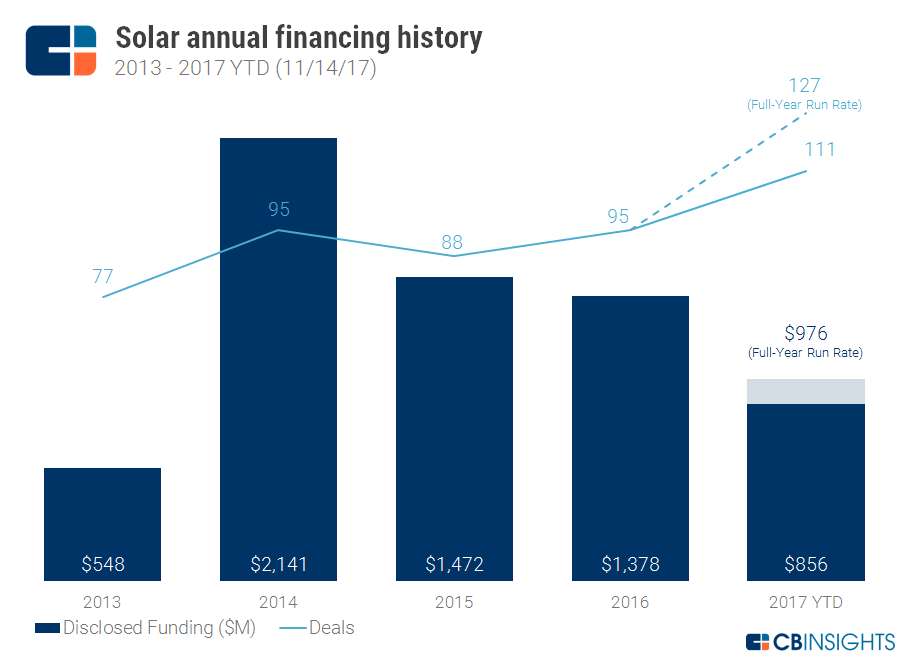 Sunnova also raised the largest solar round of 2015: a $300M private equity deal in Q4’15, with investors including Blackstone Group, Energy Capital Partners, and FS Investments. However, the year saw few other mega-rounds. 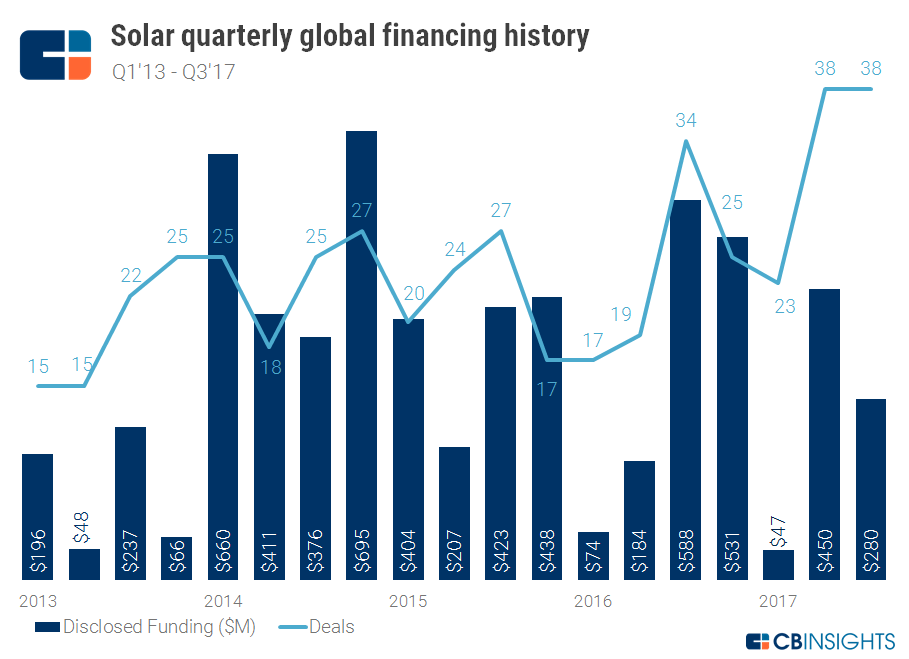 A quarterly view of financing trends highlights the volatility of the space. To date, Q2’17 and Q3’17 have brought in the largest number of deals, with both quarters closing 38 deals apiece.

Perhaps unexpectedly, as the solar industry has matured since 2013, early-stage (seed / angel and Series A) deals have accounted for an increasing proportion of deal share. 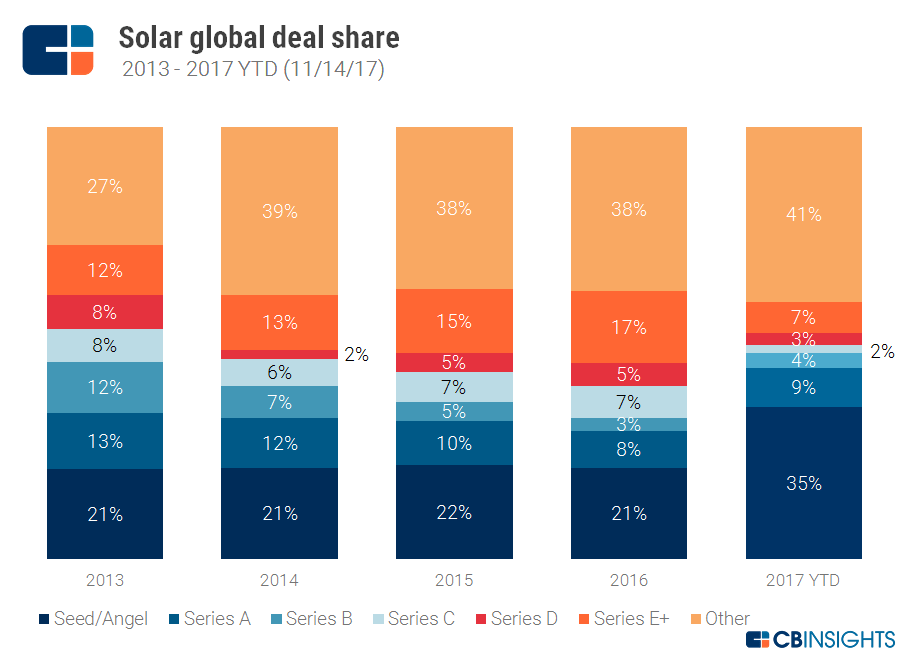 Recent noteworthy early-stage deals include two seed rounds to Nigeria-based solar startup Tizeti Network, which uses solar energy to build Wi-Fi transmission towers. In Q1’17, the company closed a $120K seed round from Y Combinator, followed by a $2M seed round in Q2’17. The latter round saw participation from a long list of investors, including Social Capital, Picus Capital, and ACE & Company.

The majority of the solar industry’s largest equity financings have gone to companies based in the United States, though three overseas companies — Nippon Renewable Energy in Japan, Solairedirect in France, and Amplus Energy Solutions in India — have also raised significant rounds.

The largest equity deal to go to a private solar company is the above-mentioned $300M private equity round to Texas-based Sunnova Energy Corp in Q3’15. The company claims 3 spots on the top deals list.

In second place is Utah-based Vivint Solar, which raised a $280M round in Q1’14, seven months before going public at a $1.7B valuation.