Deals to solar startups have been fluctuating over the last 5 years, but bounced back in Q4’16 to reach an eight-quarter high. There were 28 deals globally to solar companies, including energy storage startups, in Q4’16, compared to 13 in Q4’15. This lines up with the prices of solar power reaching an all-time low, and becoming cheaper than coal in some parts of the world. Countries like the UAE, India, Japan, and Australia have pledged to invest more money into solar energy.

Investors have poured $6.5B across 421 equity deals since 2012. From Walmart and Domino’s in India to local communities in Massachusetts, startups are working with large and small businesses and home owners to generate electricity on site and reduce the cost of monthly electricity bills. More recently, startups working on solar energy storage solutions have piqued the interest of corporations like GE and smart money VCs like CRV.

Our analysis of solar activity includes companies working on design, installation, and maintenance of solar panels, core technologies like efficient solar cell manufacturing, solar-powered products, and energy storage solutions that can impact the renewables industry at large. This report contains the following sections: 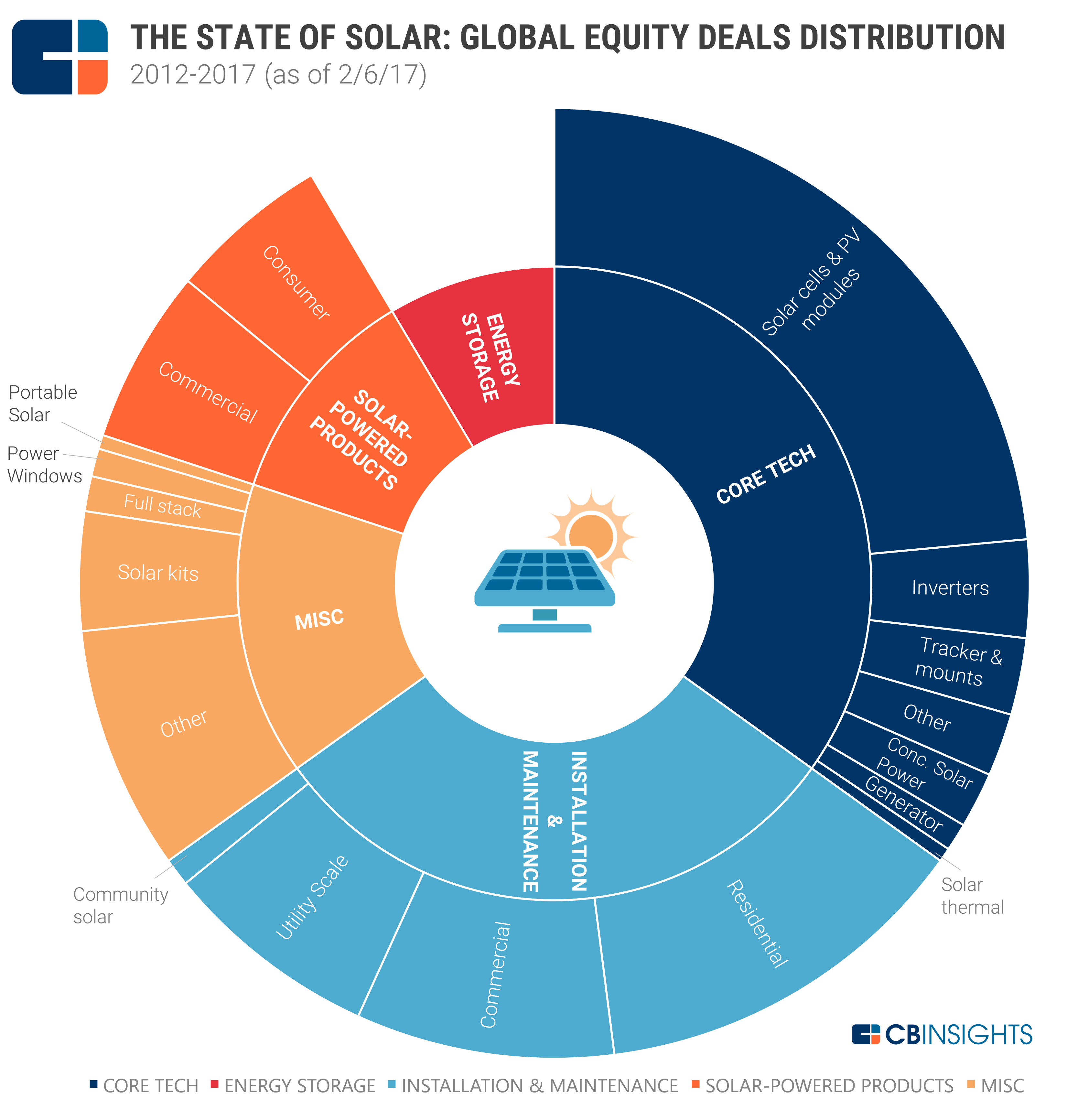 This category includes companies that provide full-stack solar implementation: site inspection, solar panel design (startups may work with partners or have their own engineering teams), installation in the home or office, and provision of maintenance support. The user may sign a lease or a power purchase agreement with the company, mostly at no upfront costs and a monthly fee. The arrangement is aimed at reducing the cost of the electricity bill by using renewable energy on site.

There were 127 deals to this category since 2012, with 55 deals going to residential solar.

Residential: The most well-funded private company in the residential solar market is Texas-based Sunnova Energy ($805M).

More recently, PosiGen in Louisiana, and SolarMax Technologies in California, raised $20M each for residential solar installations. PosiGen reportedly has a leasing agreement that targets low and mid-income families.

Commercial: This sub-category includes companies focused on solar projects for commercial buildings. India-based Amplus Energy is the most well-funded commercial solar company on our list. It received $150M in equity funding in 2015 from energy-focused global investment management firm I Squared Capital. Their projects include rooftop solar for Walmart India, Domino’s, and Hilton Hotel, among other enterprises.

The second most well-funded company is also from India: Applied Solar Technologies has raised $86.5M from investors including Bessemer Venture Partners and International Finance Corporation.

Community solar: This includes “solar gardens” that are shared by people in a community, instead of installing panels in individual rooftops. In Q3’16, Boston-based Nexamp raised a $30M corporate minority round from Mitsubishi Corporation. The company recently completed a community solar project in Sutton, MA, which will reportedly see participation from “over 100 local residents, non-profits, and small businesses.”

Utility-Scale: We classified utility-scale as large-scale solar farms that produce at least 10MW of energy. The top deal was a $250M private equity round raised by Japan-based Nippon Renewable Energy. The company recently partnered with Schneider Electric for a 36MW solar power plant in Mito City, Japan.

The most well-funded company (including only disclosed equity investments) is California-based BrightSource Energy, which has raised $654M.

This category includes companies working on the basic building blocks of a solar power system, including new solar cell technologies, inverters, and generators.

Solar cells and PVs: Nearly 100 deals went to startups working on solar cells and PVs, making it the largest sub-category for deals on the list.This includes companies working on efficient photovoltaic (PV) technology, advanced solar cells, as well as B2B companies manufacturing silicon for the PV industry. Startups here have raised nearly 100 deals since 2012. In 2016, the top round went to Germany-based Heliatek, which raised a $47M Series D from investors including High-Tech Gruenderfonds and BASF Venture Capital. Heliatek is working on “less than 1 mm thin solar films.” Goldman Sachs invested $25M in Minnesota-based tenKsolar, which sells photovoltaic modules.

California-based Silicor Materials has raised over $300M in equity funding and is the most well-funded startup. The company produces “solar silicon” for the PV industry and is backed by Hudson Clean Energy Partners.

Other: Around 15 deals went to startups developing inverters. Imeon Energy raised $1.8M in Q2’16 from France-based VCs Ouest Croissance and Pleiade Venture for developing a smart grid inverter. Startups developing trackers and mounts raised over 10 deals. Trackers are used to orient the PV module in the direction of sunlight. QBotix, a robotic tracker which was backed by Draper Nexus Ventures, Firelake Capital, New Enterprise Associates and Siemens Venture Capital, was declared dead in 2015, while its competitor NEXTracker was acquired by Flextronics International for $330M the same year.

The remaining deals in this sub-category, around 25, went to startups developing generators, solar heaters, power optimizers, and concentrated solar power (CSP) technology, among other things.

Nearly 50 deals went to companies in this category.

This category includes companies focusing on energy storage solutions that integrate with solar panels. Over 35 deals went to startups here.

Solar Kits: Over 15 deals went to startups working with mid- and low-income families in rural areas. Families and small businesses are given a “solar kit” which may include solar-powered products like lamps and charges, as well as small PV modules. Lumos Global in Nigeria raised a $40M round in Q4’16. Tanzania-based Off-Grid Electric raised $25M in Series C in Q4’15 and an additional $10M in Series D in Q3’16. London-based BBOXX raised $20M in Series C in Q3’16.

Solar Windows: Startups like SolarGaps in Ukraine and Next Energy in the US are working on windows and smart blinds that track and convert solar energy to electricity.

Full-stack: Startups here work on a range of custom solar solutions, from panel design to solar-powered products. All 5 deals in this category went to startups working in India, like kWatt Solutions and Zynergy.

Portable Solar: Two seed/angel deals went to Masar in the Netherlands and Renovagen in the United Kingdom for mobile/portable solar power generations systems.

The heatmap below shows the progression of deals to each category between 2012-2016. The high in deals to new solar cell technologies seen in 2012 dropped in the following years, from over 30 to less than 15 in 2016. Solar-powered products as well as energy storage tech gained momentum in 2016. Community solar, which picked up in 2013, is still an area of low deal saturation, with potential for further investment activity. Deals to residential solar projects have remained nearly constant at around 14 over the last 2 years. 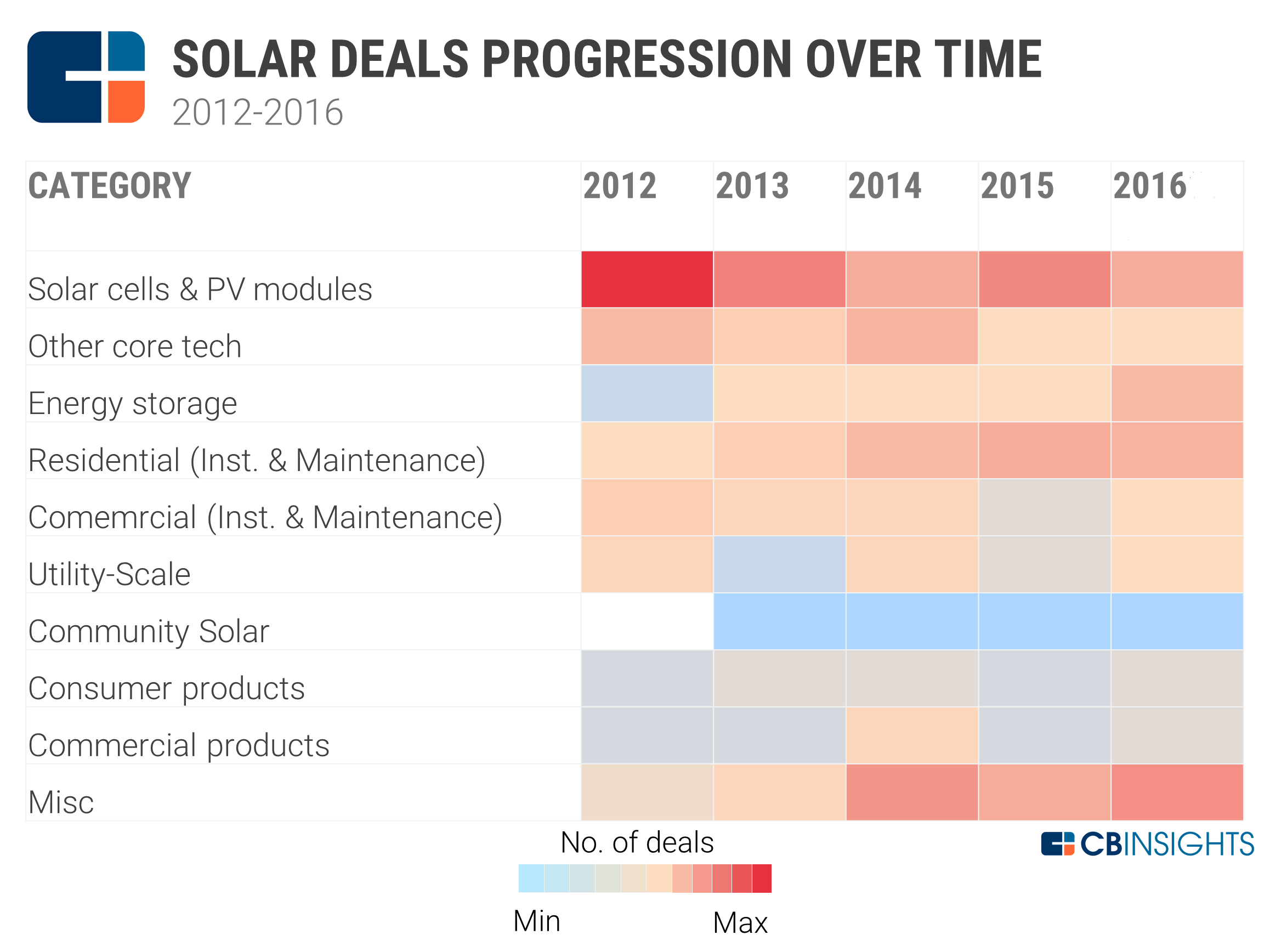