Research Brief
1367
The five largest exits in the buzzy SDN market have seen an aggregate exit valuation of over $5.5B.

Investor-backed startups are propelling the push to software-defined networking. Since the start of 2012, SDN-related companies have raised over $850M across more than 50 deals.

Funding to the SDN ecosystem has certainly grown including notable $30M+ financings to firms including Cumulus Networks, backed by Battery Ventures, Andreessen Horowitz and Sequoia Capital, as well as go-it-alone Sequoia investment vIPtela.

But as the Industry Analytics visualization below indicates, the buzzy SDN market is still in its early stages – over the past three years, less than 15% of deals have been at the late-stage (Series D+). For comparison sake, three Hadoop vendors alone – Cloudera, MapR Technologies and Hortonworks – raised more than $1.1B in debt and equity in 2014 YTD.

On the exit spectrum, the SDN market has seen two ‘unicorn’ exits already in Arista Networks’ IPO and VMWare’s acquisition of Andreessen Horowitz-backed Nicira Networks. Using the interactive “Rankings” feature on CB Insights, the five largest disclosed IPOs or acquisitions in the SDN space to date are below. Cisco’s acquisition of Swedish SDN startup Tail-f Systems was included as well given its essentially identical exit valuation to Juniper’s purchase of Khosla Ventures-backed Contrail Systems in 2013.

Whether the increased prioritization of SDN in enterprise IT management prompts more high exit valuations to venture-backed SDN vendors will be certainly be interesting moving forward. 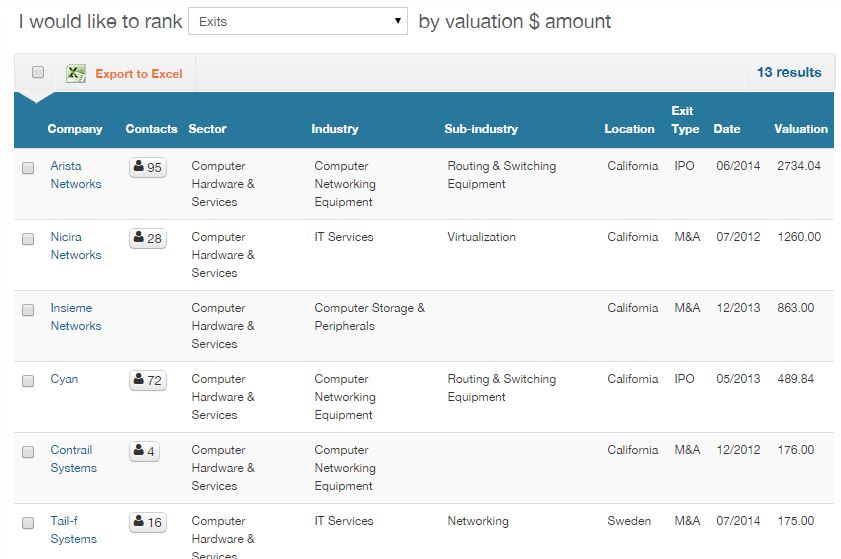 All the visualizations and rankings above come directly from the CB Insights Venture Capital Database. Sign up free below.