Research Brief
1886
Japanese telecom giant SoftBank has completed 6 deals already in 2015, including a $1B round to South Korea-based Coupang.

SoftBank is on an absolute tear in private-tech investing. Former Google exec Nikesh Arora has overseen the company’s recent financing spree, after receiving a mandate to make bold investment bets in internet and tech companies globally.

We used CB Insights data to track the Japanese telecom’s investments in startups.

SoftBank is on pace for its biggest year yet for first-time bets — with 6 new deals already in 2015 including a billion-dollar round to Korean e-commerce site Coupang, and a $100M round to social-media tracker Banjo. From a funding perspective, SoftBank has participated in or led deals totaling $1.12B in funding in 2015 and $1.63B last year.

That said, SoftBank’s India and China deals have been far more sizable. SoftBank’s four India deals have clocked in at an average $125M per deal while its average deal-size in China comes in at $323M. Indonesia and Singapore have also been the target of large SoftBank investments including a $100M deal to Indonesian online mall Tokopedia and a $250M deal to Singapore taxi-booking app GrabTaxi. 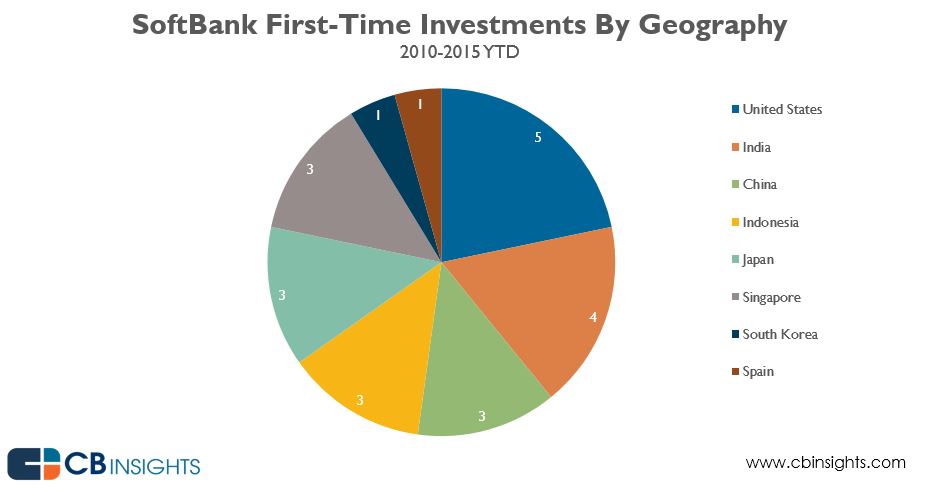 Since 2010, SoftBank has completed 13 $90M+ investments totaling $3.93B. Below are the largest financing deals or corporate-minority stakes SoftBank has taken over the last five years. The list does not include majority stakes in companies such as game developer Supercell. SoftBank put $1.2B into Supercell in June to become the Finnish company’s sole external shareholder, acquiring the shares from other investors including Accel Partners, Index Ventures, and Institutional Venture Partners.