Research Brief
3663
Snap is the biggest US-based tech company IPO since Facebook's in 2012.

Snap Inc. (the parent company of Snapchat) priced its IPO yesterday evening ahead of entering the public markets today. Pricing their 200M share offering at $17 a share, the total offering equaled $3.4B and gave Snap, Inc. a market cap of $23.6B on a fully-diluted basis. This represents the largest IPO of a US-based tech company since Facebook in 2012. We dug into the numbers to examine how Snap’s exit compares to those of other social and messaging properties and also compared Snap to comparable companies at the time they entered the public markets.

Compared to other social media and messaging companies that exited after 1999, Snap, Inc. has the highest valuation at exit since Facebook went public in 2012, narrowly beating out WhatsApp’s acquisition valuation of $22B. 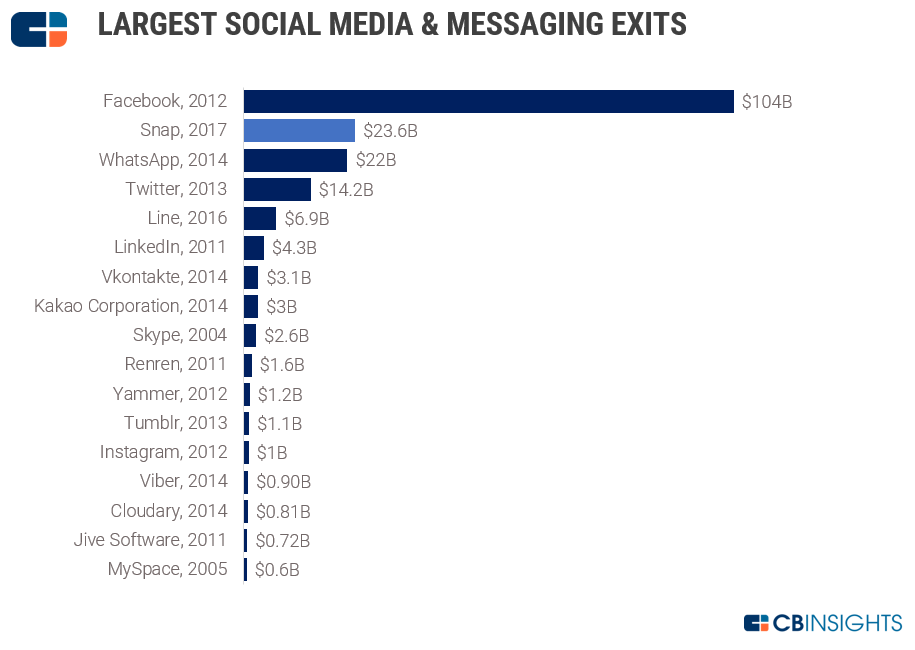 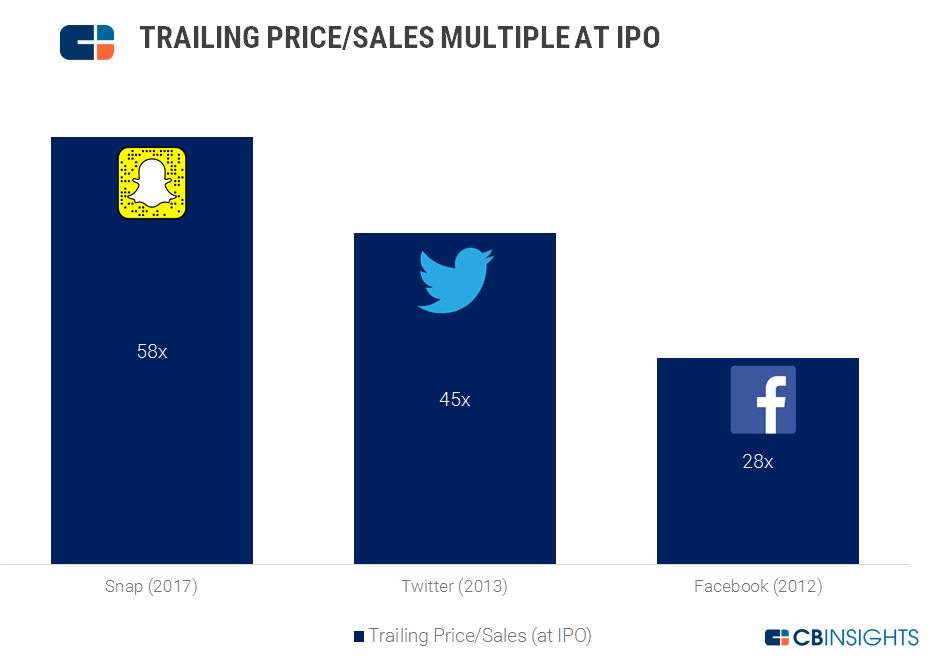 Using the comparables method, we considered Facebook and Twitter as being most similar in business model to Snap. Like Snap, both social media networks are heavily reliant on advertising revenue and user growth to drive their business.

Because Snap’s earnings show a net loss of $514.6M for 2016, which is perhaps to be expected for a fast-growing service which relies on other providers to house its data, we did not compare the companies on a price-to-earnings basis, and instead relied on trailing price-to-sales at each company’s time of IPO.

In this analysis we also include Netflix and Viacom for comparison as Snap has recently made forays into partnered content creation and content hosting, and highlighted young demographics’ disenchantment with traditional TV in the S-1. 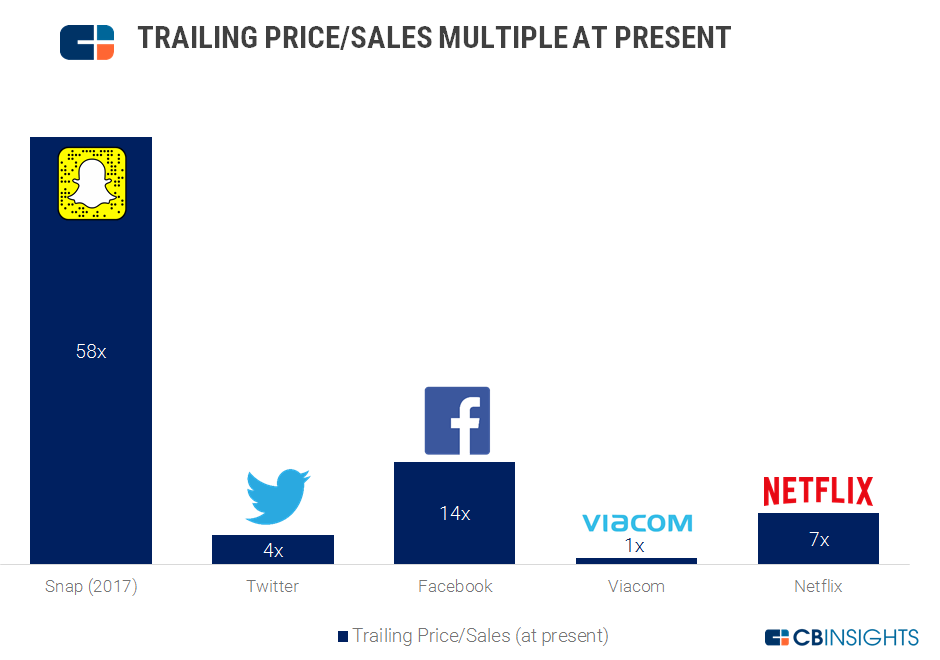 Comparing the companies at present day, the price-to-sales ratios have changed dramatically. At price-to-sales, Twitter sits at 4x, and Facebook at 14x. Content companies Viacom and Netflix, while publicly traded for more than a decade and possessing drastically different growth trajectories, have multiples of 1x and 7x, respectively.

For added comparison, we examined Snap’s price-to-user multiple, and in this analysis compared their peer group at time of IPO and at present.

As social media companies and advertising platforms, Snap, Twitter, and Facebook all require large and growing audiences if they are to signal to advertisers and investors that there’s room for growth ahead. Snap only reports daily average users, so its precise monthly user number is only estimated. For the purposes of our analysis we assumed 238M MAU. We came up with this number by assuming Snapchat had the same ratio as Facebook at IPO in terms of DAU to MAU. 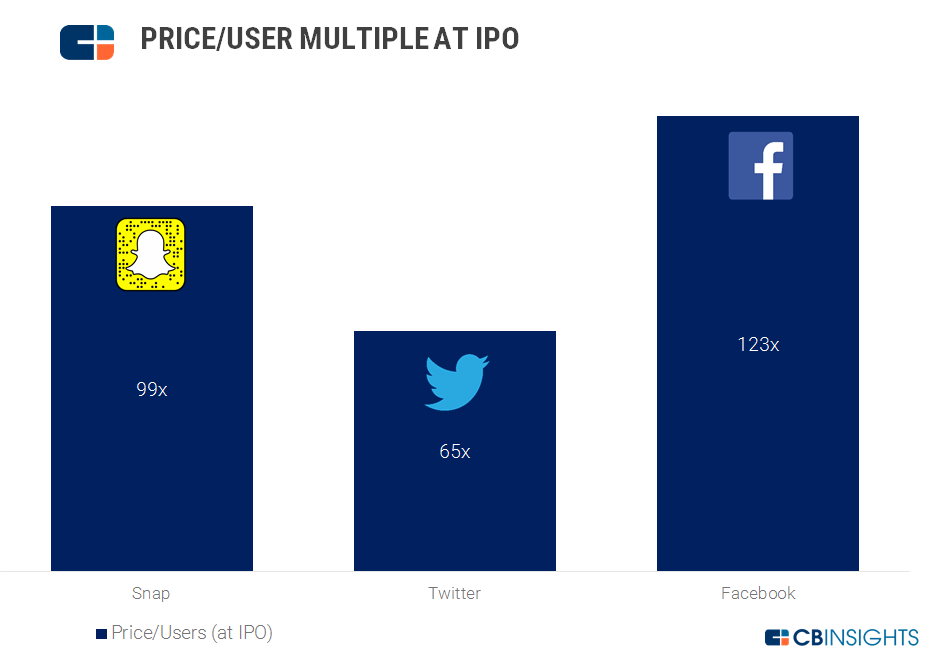 At its IPO Snap is priced at a level that’s more expensive than Twitter but lower than Facebook in terms of price to users at IPO. And at present day, those numbers slide farther apart. 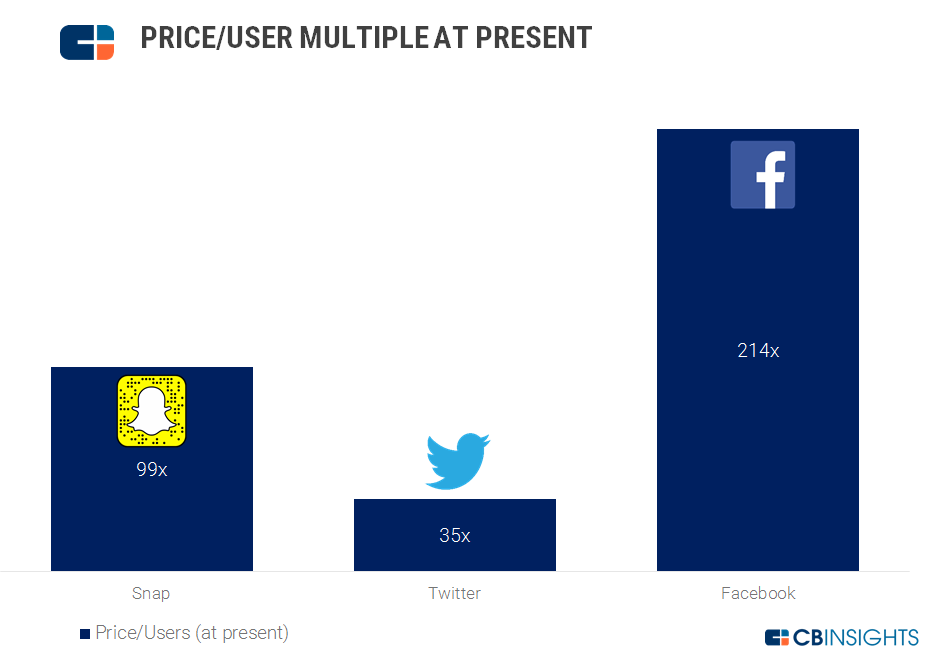 For context, Facebook also grew its daily active users by 48% between Q4’10 and Q4’11 when it reached 483 million DAUs, ahead of its May 2012 IPO. It’s certainly notable that Facebook had a much larger daily user base while achieving the same pace of growth.

Snap certainly has demonstrated growth in line with its comparables, but as mentioned above, Facebook’s MAU population was 845M in December of 2011, dwarfing estimates of Snap’s MAU range, between 240-300M.

Despite the vastly different industry and business models, it’s interesting to see how Snap’s private market valuation has compared to those of its startup peers (all of which are still private). 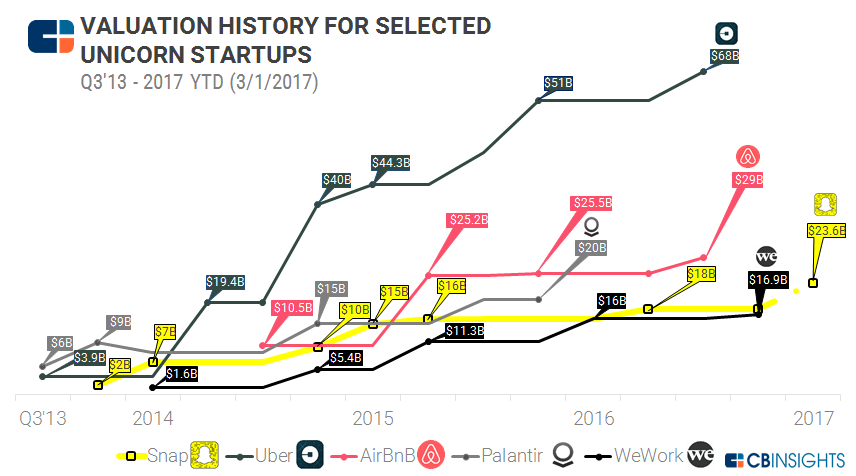 In 2015, the field shifted. Snap took a $15B valuation in Q1’15, and rose above Airbnb to tie with Palantir. In Q2’15, Snap bumped up a billion to $16B, but Airbnb took off and since then has remained in second place.

In Q4’15, Palantir reclaimed third place with a $20B valuation. More recently, investors in Snap’s Series F round in May 2016 valued the company at $18B.

Given the relatively vast industries that Uber (transport and logistics), Airbnb (hotels and tourism), Palantir (consulting), and Snapchat (media) are taking on, it makes some sense that Snapchat has emerged from this group of high fliers. Snap is effectively positioning itself as a competitor to traditional TV and cable broadcasting, with its Stories and Discover videos that are viewed by millions of viewers whose demographics ad-buying brands are chasing.

However, as we’ve noted, Snap faces existing competition in the form of Facebook, which has already become a dominant force in digital media and is not going to give up on brand advertising, even if historically, direct-response ads (i.e. ads to drive clicks or purchases or downloads) have been its strength. Facebook’s Instagram property has most recently been very successful emulating many of Snapchat’s features and gaining mindshare.

Snap’s most recent foray into wearables is a signal of possible future growth in new areas in augmented reality. Its initial Spectacles product sold out quickly, and Snap has itself acquired three companies this year alone, including a company specializing in 3D imaging (Seene). Snap also bought Looksery, a facial recognition company in 2015. In January 2015 it acquired Epiphany Eyewear.

Our new patent data also reveals Snapchat has filed over 30 patents, with more recent patents related to object recognition and image augmentation. Whether Snap’s ambitions in new areas like wearables/hardware and AR and AI will succeed and lead to more revenue opportunities either in the core ad business or elsewhere is uncertain. However Snap is clearly not sitting on its hands and has been quick to make investments and acquisitions, and roll out products in areas where larger tech players are also making bets.

Using CB Insights proprietary Company Mosaic algorithm (read more about the National Science Foundation funded tech here), we also took a look at how much momentum Snap had ahead of launching into the public markets. Snap stacked up up well next to its private startup peers in terms of other financial and non-financial metrics. 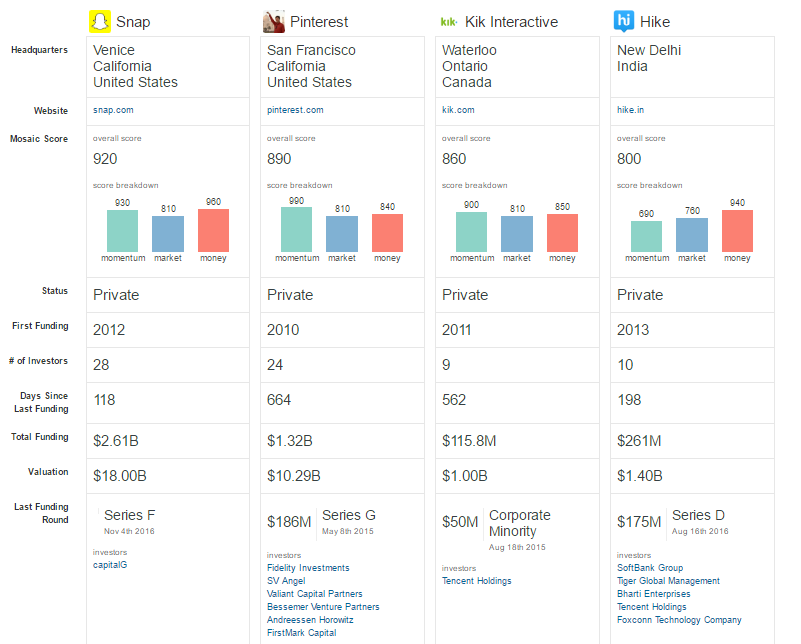 Of similar social media and messaging companies still in the private markets, Snap had the strongest financial position, with a near-perfect 960 Mosaic Money score. This score was based on fundraising history, investor quality, estimated burn rate, and important deals and partnerships.