Object, Facial & Audio Recognition along with Spectacles & AR amounted to about 15% of the company's currently publicized patents.

So far Snap Inc., the parent company of Snapchat, has been relatively mum about its plans to stave off copycat competitors and conquer augmented reality (AR). As a newly minted public company, Snap recently held its first earnings call and delved into the performance of its content platform, ad networks, as well as its sales of Spectacles, the company’s camera-laden sunglasses for capturing video. Snap posted a significant net loss of $2.3B for Q1’17, and spent a notable $78M on R&D operating expenses.

While the new numbers give some context on where Snap is presently, studying the patent applications and grants of the Santa Monica-based “camera company” can give forward-looking insight into its product roadmap and innovation strategies. Previously, we published a patent analysis going into the details of its most forward-looking patents. CB Insights subscribers can search and filter for the company’s patent activity by logging in.

Using CB Insights’ patent search engine, we categorized all 55 of Snap’s patent grants and applications by initiative to see some of the trends around patent activity. 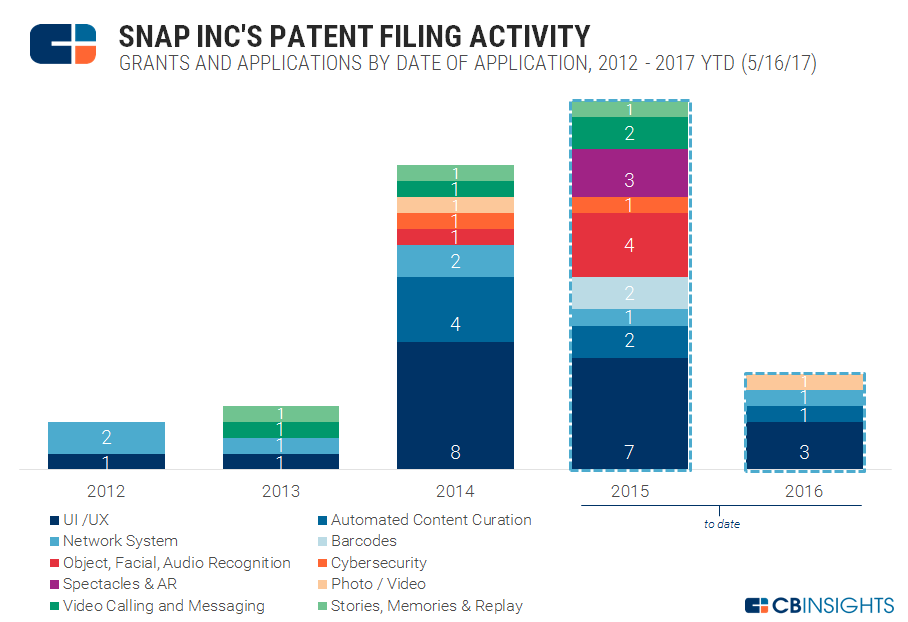 Note: this analysis comes with the caveat that the patent data on 2015 and 2016 are incomplete. Due to a 1-2 year time lag at the USPTO, more applications and grants will be published that were originally applied for in those years.

While it may be too early to completely tell where its IP efforts are shifting, 2015 patents have indicated a big jump in the recognition and AR arenas, especially considering the year prior in 2014 had only 1 related patent. Object, Facial & Audio Recognition along with Spectacles & AR amounted to 8 patents published thus far, which translates to about 15% of all Snap’s currently publicized patents.

Some takeaways from the patents breakdown:

Want more data on Snap and tech company patents? Log in to CB Insights, or sign up below.