The CB Insights Fintech Smart Money list features the world's top-performing VCs for fintech investment. We analyze their portfolios to identify where they see opportunity and risk.

Fintech is well-known as a top area for VC investment. In recent years it has yielded some big returns for investors as a host of startups reimagine how consumers think about money and financial services.

But which VC firms are consistently finding the next fintech superstars before they hit it big? Using the CB Insights database, we surfaced the top 25 VCs for fintech out of thousands of firms to create a “Fintech Smart Money” list.

The major fintech success stories of the 2020s will likely emerge from the portfolio companies of these “Smart Money” firms, making this list a powerful filter for uncovering startups and industries that could transform financial services over the next decade.

The heatmap below shows how the deal concentration from these investors has shifted over the last 5 years. 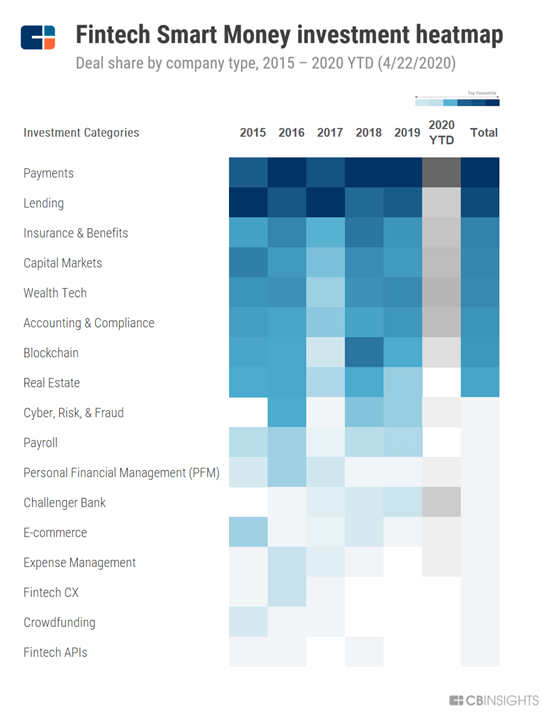 Investment categories are ranked by percentile within each calendar year, based on the number of deals with participating Fintech Smart Money investors.

Among these investment categories, some have seen stark growth in deal count while others have lost momentum. Payments, insurance & benefits, and wealth tech, for instance, are on the rise, while areas like crowdfunding have fallen out of favor. 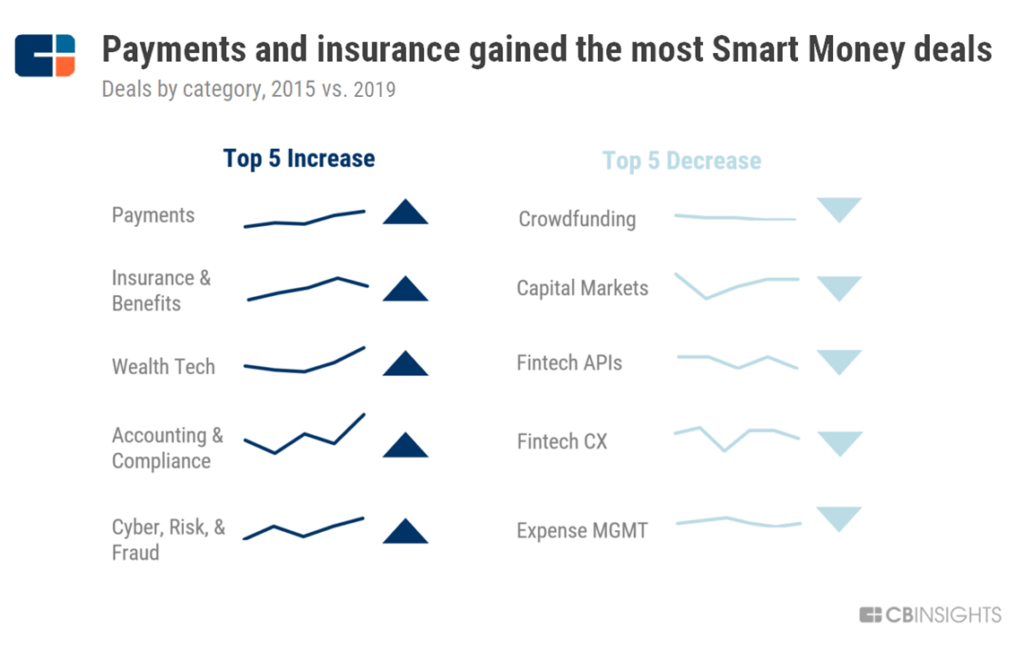 See the methodology section at the bottom of this post for the full Fintech Smart Money VC list.

Using the Fintech Smart Money VC list, we analyzed how investment activity has changed over the past 5 years and uncovered the following key takeaways:

1. fintech may Have Reached A Saturation Point

In 2019, fintech deals with participation from Fintech Smart Money VCs grew 15%, while the total funding tally fell by 34%. This suggests that while fintech is still a major area of investment — Smart Money VCs participated in deals to fintech companies worth a combined total of more than $15B last year — the current crop of winners have been picked and investors are looking to earlier stages for the next wave.

Despite the funding draw-down, consistent exits (such as Visa’s recent $5.3B acquisition of Plaid) along with the rapid rise of emerging fintech markets like Latin America suggest that fintech investment will remain elevated.

In the near-term, however, startups targeting SMBs or offering alternative lending are dealing with major challenges stemming from the Covid-19 pandemic. Smart Money-backed Carta, for example, recently laid off 16% of its workforce. The pressure these startups are facing could foreshadow a retreat in funding to these categories. 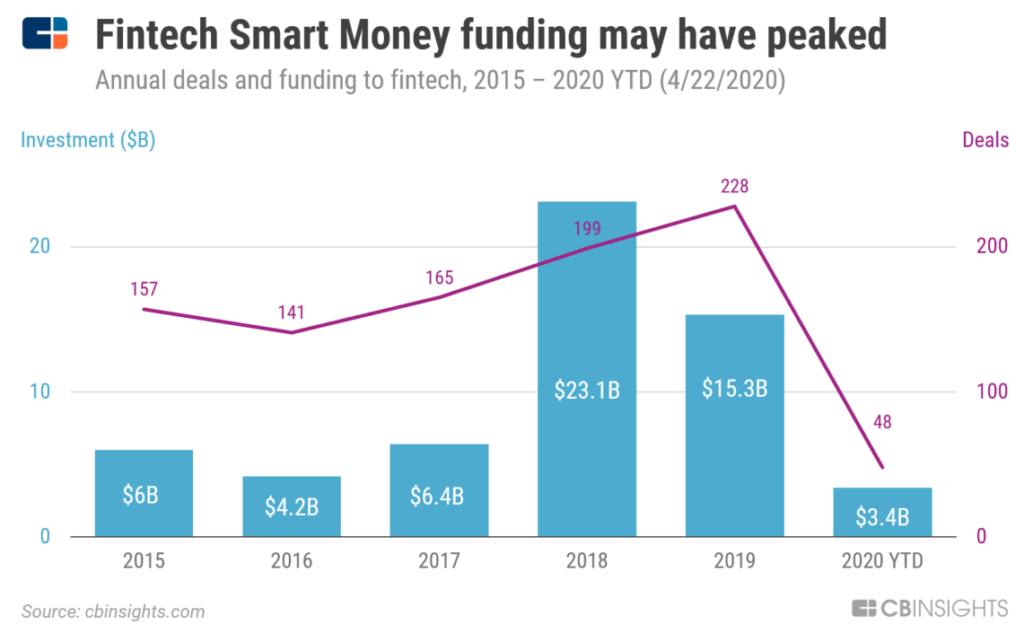 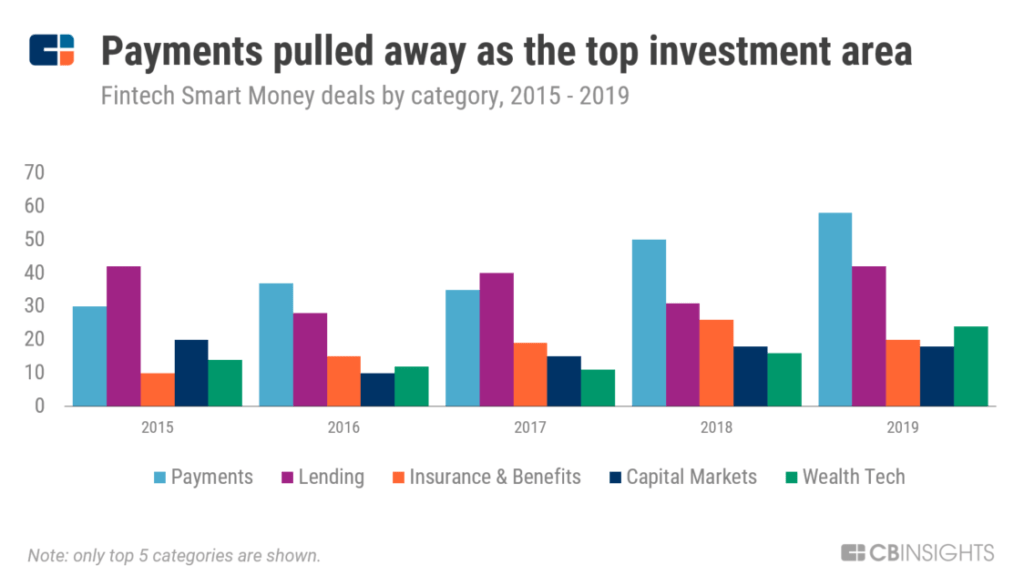 3. Early-Stage Fintech deal Activity Expands Beyond the US

Only 53% of early-stage, Fintech Smart Money-backed deals in 2019 went to US-based startups, compared to 80% in 2015. The trend is even more pronounced in 2020 so far, with the US representing only 38% of early-stage deal share. 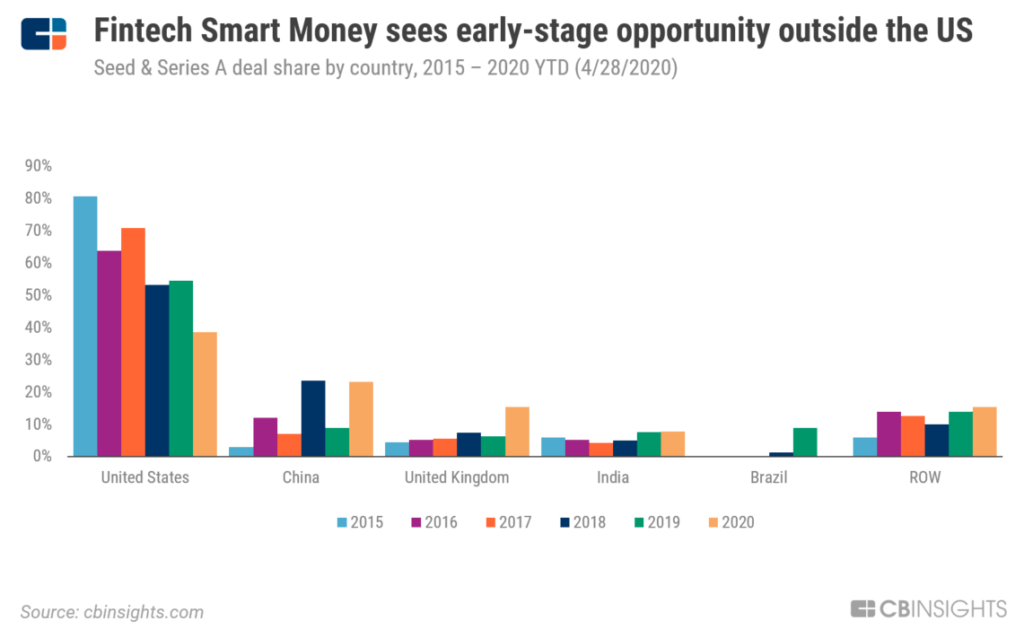 Echoing the broader Fintech Smart Money investment trends, the categories that received the most early-stage deals in 2019 were payments and lending, each representing about a fifth of the total early-stage deal share. 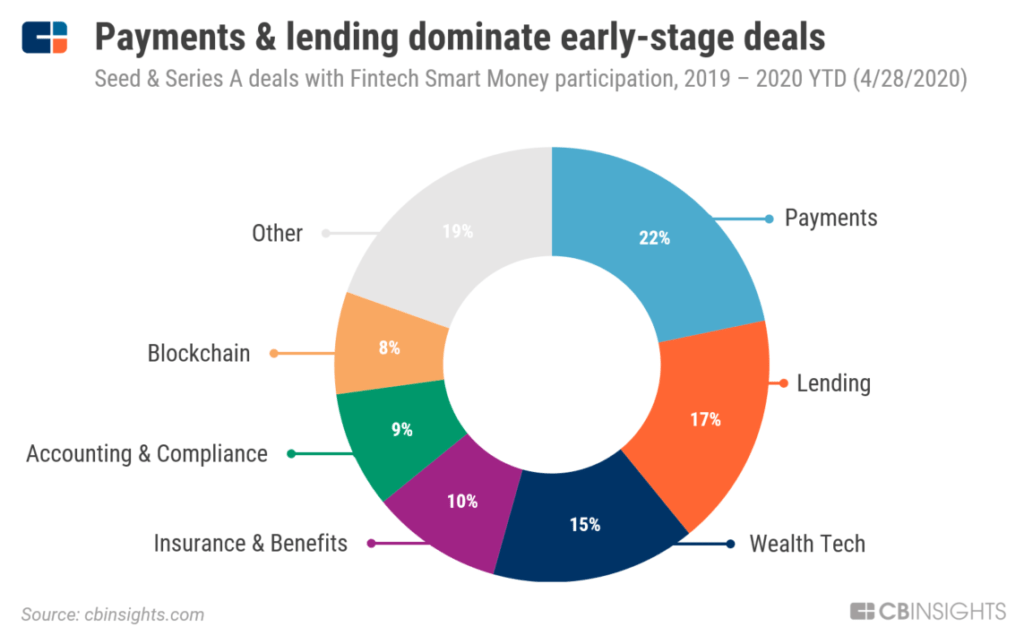 In the past 5 years, Fintech Smart Money investors nearly doubled their participation in deals to accounting & compliance software startups.

Fintech Smart Money investors piled into the blockchain space in 2018 — not long after the value of a single bitcoin hit nearly $20,000 — participating in 26 deals amounting to $821M.

But sentiment has since waned. In 2019, Fintech Smart Money VCs participated in just 11 deals to blockchain startups, a 58% drop YoY.

Blockchain remains an area Fintech Smart Money VCs are eyeing, but it will likely take up only a fraction of the attention that more established fintech categories are to receive. 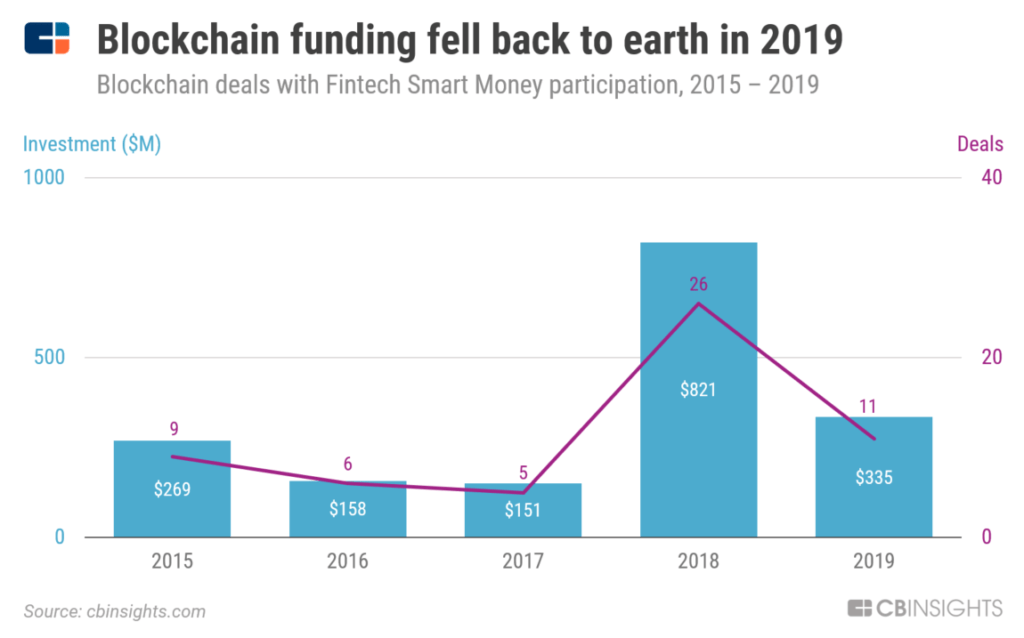 Our methodology for the Smart Money list goes beyond returns and prestige rankings used for many comparable lists. It combines factors like portfolio quality and Mosaic scores, exit and unicorn hit rates, stage of investment entry, and Fintech 250 appearances, among other metrics.

The Fintech Smart Money list is an unranked collection of the top 25 venture capital firms worldwide for fintech investment. We crunched the numbers for over 2,200 VC firms in the CB Insights database to surface the highest-performing investors based on our methodology (more on that below).

What makes a VC “smart”?

Our methodology factors in portfolio company outcomes, appearances on the CB Insights Fintech 250 list, the ability to consistently deploy capital, and portfolio quality. These factors capture the combination of a firm’s network and access, scale and repeatability, and profitability that make VCs “smart.”

What can I do with this collection?

The Fintech Smart Money list is available on the CB Insights platform as an Expert Collection, which can be used as a filter for deal and company searches. Rather than publish a standalone, prestige list, we want the Fintech Smart Money Expert Collection to be used as a tool to help our clients surface high-quality companies and emerging industries.

Which VC firms are on the Fintech Smart Money list?