Research Brief
2273
Early-stage activity among smart money VCs has largely trended down recently, falling in 4 of the last 5 quarters.

Recently there have been whispers in the VC community regarding the top investors pulling out of the overheated early-stage market. While we’ve seen mega-rounds increase and overall deal activity fall in the US in 3 of the last 4 quarters, the early-stage VC market has remained fairly robust.

We looked at the data to see if some of the top VCs, also known as the “smart money” really are tapering off their early-stage (Angel – Series A round) activity in the US. The data says, yes.

Early-stage activity among smart money VCs has largely trended down over the past 6 quarters, falling to 67 deals in Q3’15, the lowest quarterly tally since Q4’10, which saw 64 deals. Overall early-stage activity has fallen 4 of the last 5 quarters, but with 57 deals through 2 months of Q4’15, we expect an increase in deal activity vs. Q3’15. 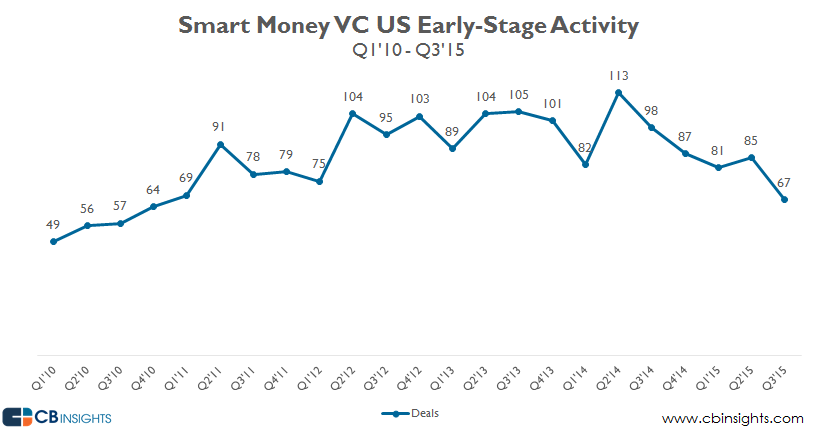 Are average round sizes the culprit for fewer deals?

We also looked at the average early-stage round size that these smart money VCs are participating in, to see if this could help account for the deals slowdown. The past three quarters have all reached $7.6M+, with Q3’15 reaching a multi-year high of $10.4M.

While this high average round size could be a function of overall round sizes creeping up, it also could mean that because of the increase in round sizes, smart money VCs are doing fewer, larger deals. 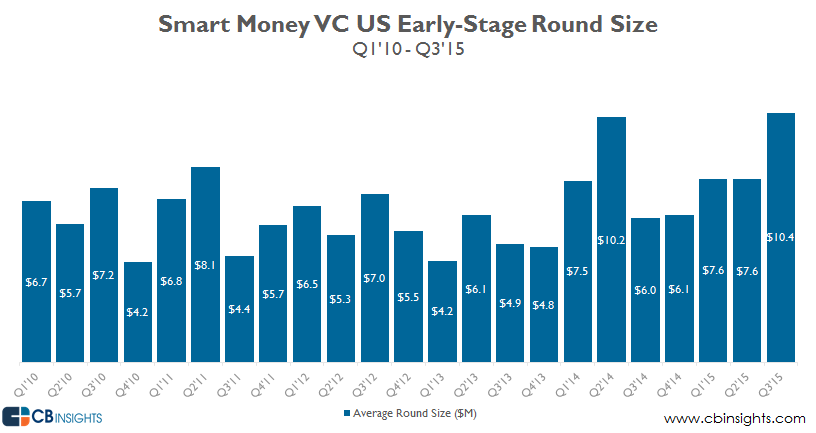 Note: To analyze smart money trends, we looked at the activity of the top 20 VC firms, selected according to portfolio valuations and investment outcomes. Some of the investors are linked to relevant research briefs. Here’s our full list of 20 smart money investors:

Want more data around smart money VC activity? Login to CB Insights or sign up for free below.