The CB Insights Smart Money list contains the world's best-performing VC investors. We analyze their early-stage investment portfolios to identify where they see opportunity and risk.

Venture capitalists are known for their ability to see around corners. Prescient, wildly profitable VC investments in startups like Facebook, Alibaba, and WhatsApp are part of Silicon Valley lore.

Less widely shared is the concept of “power laws” in the distribution of returns across venture capital firms. In truth, a tiny, elite minority of firms account for most of the outsize returns the asset class is known for.

We surfaced the top 25 VCs out of thousands of firms in the CB Insights database. Many of the game-changing startups of the 2020s will likely emerge from the portfolio companies of these “Smart Money” firms, making this list a powerful filter for uncovering startups and industries that could change the world over the next decade.

The heatmap below shows how the deal concentration of Smart Money VCs’ early-stage deals has shifted in the last 5 years across the 30+ top investment categories.

Investment categories are ranked by percentile within each calendar year, based on the number of deals with participating Smart Money investors.

Smart Money investors have shifted portfolio concentrations over the past 5 years. Categories like fintech and many enterprise-focused services are on the rise, while some consumer-focused investment categories have fallen out of favor. 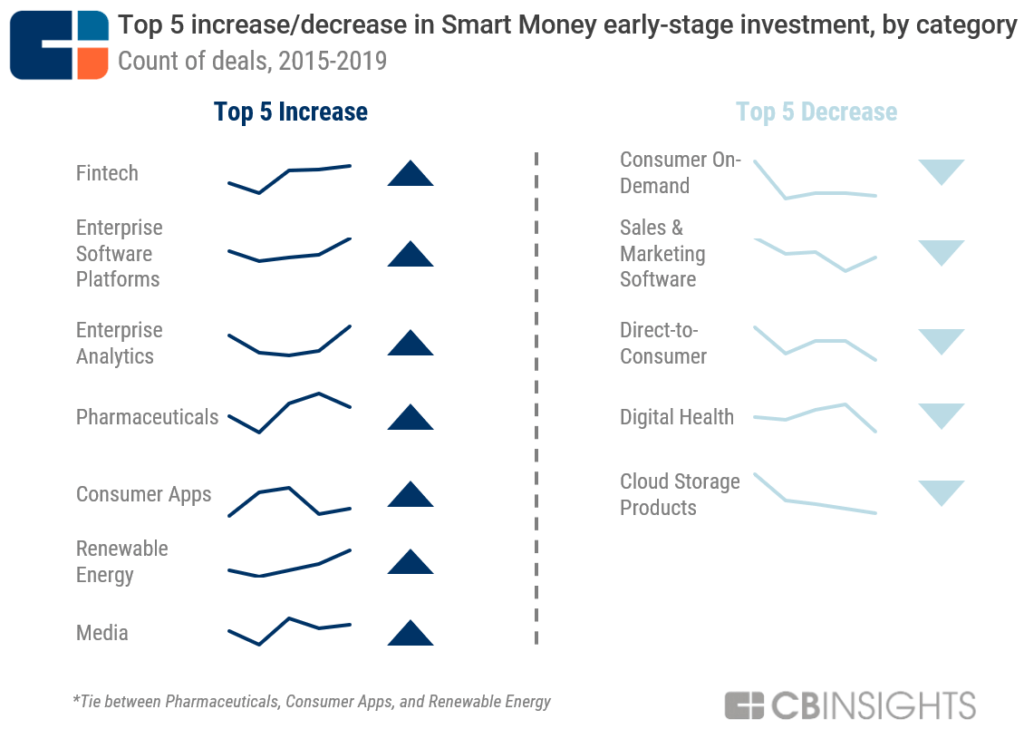 Using the Smart Money VC list, we analyzed how early-stage investment activity has changed over the past 5 years and uncovered the following key takeaways:

While there is notable territory we don’t cover explicitly in this analysis (e.g. digital health, cybersecurity, gaming), we believe the 5 trends presented below are the most relevant today.

Enterprise-focused software startups raised over a third of all deals with Smart Money participants over the past 5 years. 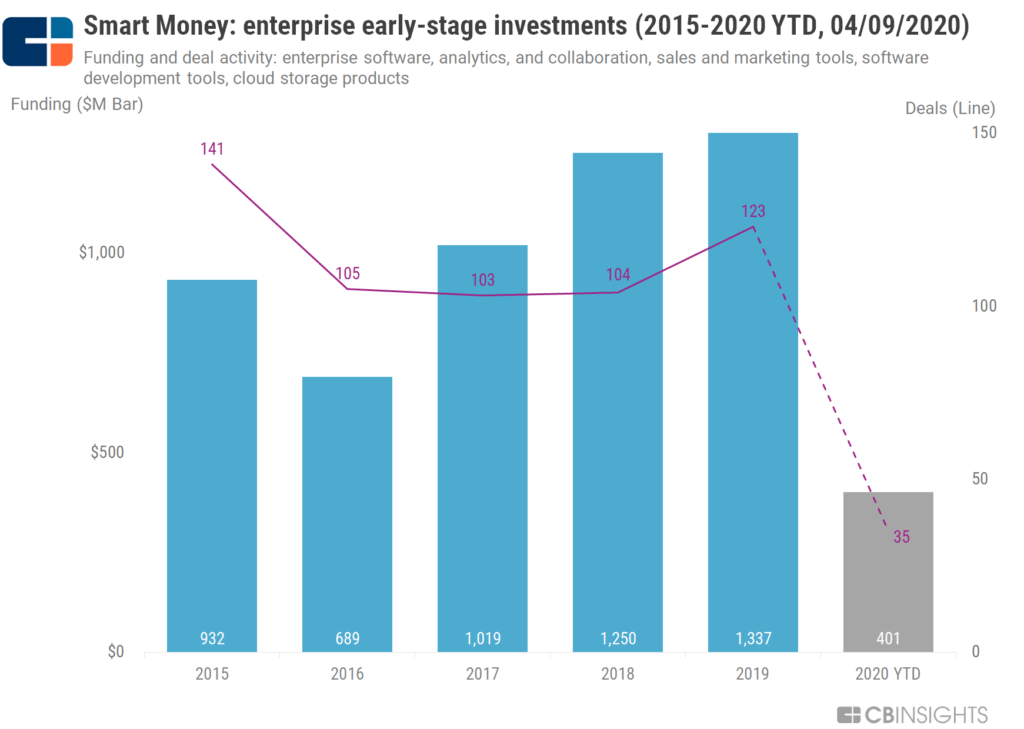 Among enterprise-focused companies with Smart Money investors, the average valuation at exit was $137M. Several of these investments have been highly profitable for early-stage investors.

For example, Heptio, a startup that helped companies transition legacy software systems, raised a Series A round in 2016 with participation from Accel, followed by a Series B at a $117M valuation in 2017. In late 2018, VMware acquired Heptio for $550M, providing a rapid, highly profitable exit for a small group of investors.

As we enter a challenging investment environment in 2020, Smart Money investors could be seeking safety in enterprise-focused startups. At the end of Q1’20, Smart Money deal activity in this category was at its highest quarter-over-quarter level since 2015.

2. Quantum computing Is on The Horizon

Quantum computing is edging toward commercial applications. Smart Money investors are funding early-stage startups working on quantum hardware systems and software platforms that could eventually lead to exponential leaps in computing power for both researchers and commercial users.

Smart Money investors have funded 5 early-stage quantum computing startups since 2016. The numbers are still small, but we expect this category to see increasing investment and commercial traction over the coming years. 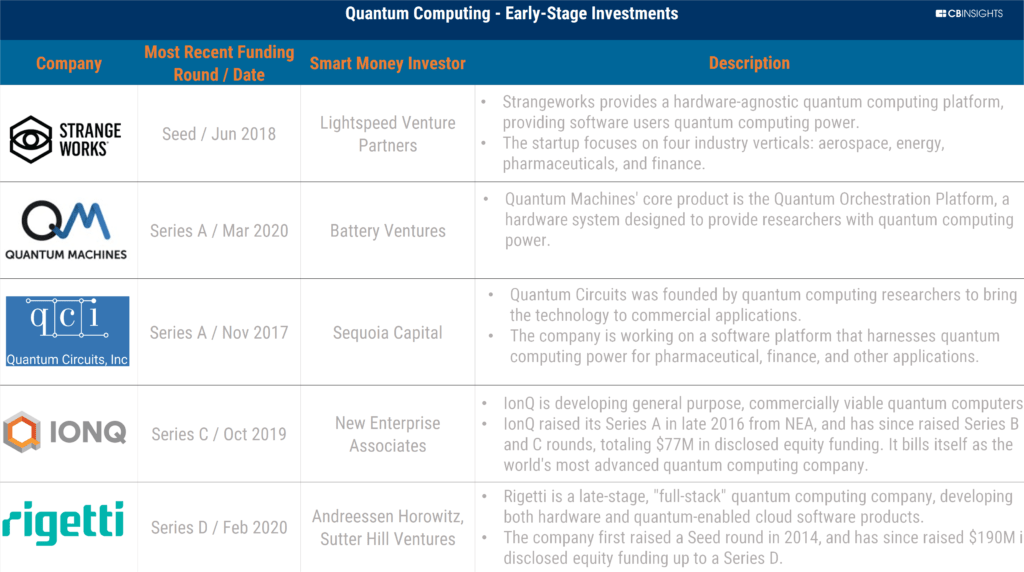 Many of these companies are developing software platforms that harness quantum computing power. Quantum-powered software products, like those offered by Strangeworks, Quantum Machines, and Quantum Circuits, provide an option for users that can’t justify investing in today’s quantum computer hardware, which is generally expensive, highly delicate, and intended only for research.

Rigetti and IonQ, both pure-play quantum computer companies, raised seed and Series A rounds in the past 5 years, and have seen significant commercial traction in a short time frame. IonQ recently partnered with Amazon Web Services to allow AWS users to remotely run experimental algorithms on its quantum computers.

It is remarkable that these Smart Money-backed quantum computing startups are entering into commercial applications given how nascent these technologies were as recently as 10 years ago.

Smart Money investors in the past 5 years funded 8 early-stage companies developing pure-play AI technology that could enable a variety of applications.

These companies provide chips, training data, and infrastructure solutions. While AI-enabled startups became commonplace near the end of the decade, the startups in this space are distinct in that they could provide the underlying infrastructure for a wide range of AI products in the future.

Cerebras Systems is a pioneer in this space. The company raised a Series A in 2016 from Benchmark and has since completed more rounds to reach a total of $173M in disclosed equity funding.

The company’s flagship product is the Cerebras CS-1, a deep learning system for data centers that is powered by the world’s largest graphics processing unit.

Already, Smart Money investors are seeing successful exits from early-stage investments made in this space over the past 5 years.

For example, NEA invested in Mighty AI‘s 2014 seed round and 2015 Series A. The company was then acquired by Uber in 2019 for an undisclosed price. Mighty AI provides training data to help develop machine learning applications for autonomous vehicles.

The companies developing AI hardware products could be the future providers of day-to-day computing power in a wide variety of industries.

The direct-to-consumer startup playbook, typically involving money-losing direct-to-consumer products that scale rapidly using prolific advertising and generous customer promotions, is out of favor. Smart Money investors backed 126 of these companies in early-stage deals over the past 5 years, with deal activity declining starting in 2018. 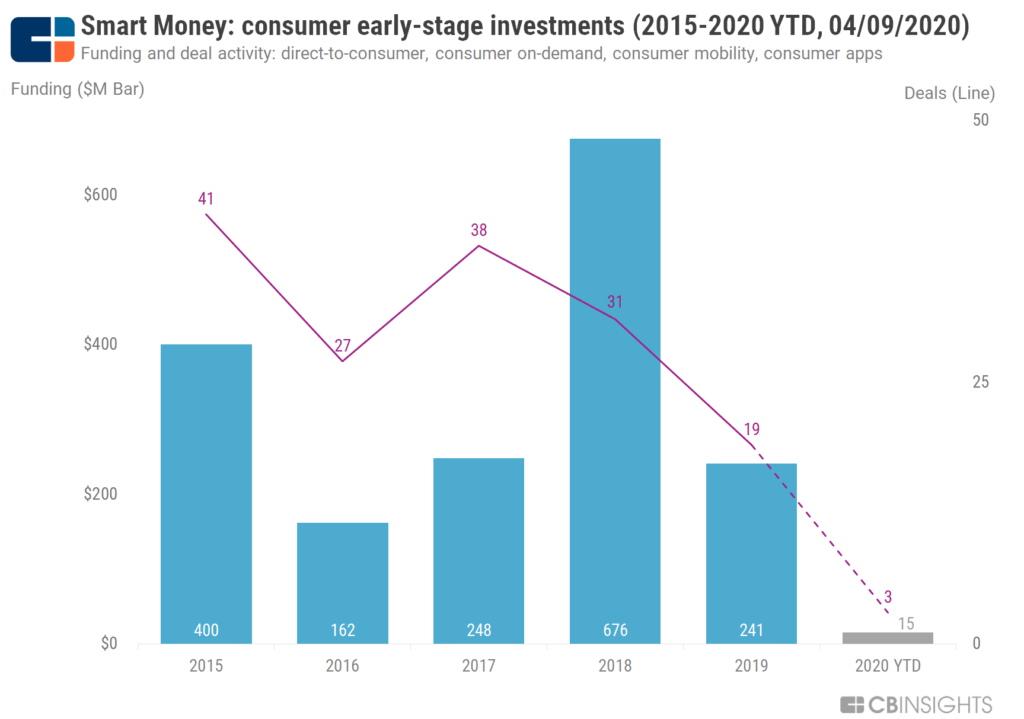 Many of these startups have recently exited in highly publicized IPOs. But these companies have tended to perform poorly in the market, with public filings revealing significant weaknesses in their underlying businesses.

In one of the most extreme cases, Blue Apron, a meal kit delivery company that raised a 2013 Series A with participation from Bessemer Venture Partners, has seen its market value decline by over 90% since its 2017 IPO.

In another example, direct-to-consumer mattress company Casper, which raised a 2014 Series A with participation from NEA and Norwest Venture Partners, went public in February 2020 at less than half the value it was given during its Series D a year prior. The company’s public filings revealed that it was operating at significant losses from heavy customer acquisition costs.

While consumer-focused startups may have been able to exit at high multiples in acquisition (e.g. Unilever’s $1B acquisition of Dollar Shave Club in 2016), feedback from public markets will likely push VC sentiment for these companies down, especially at early investment stages. Smart Money investors are ahead of this trend: early-stage deal activity among these investors began to fall in 2018.

Among consumer-focused startups, fintech is a notable exception in sustaining investment from Smart Money VCs. Fintech investment by Smart Money investors has been in the top percentile the past 3 years and accounts for the most deals of any single investment category in our analysis. 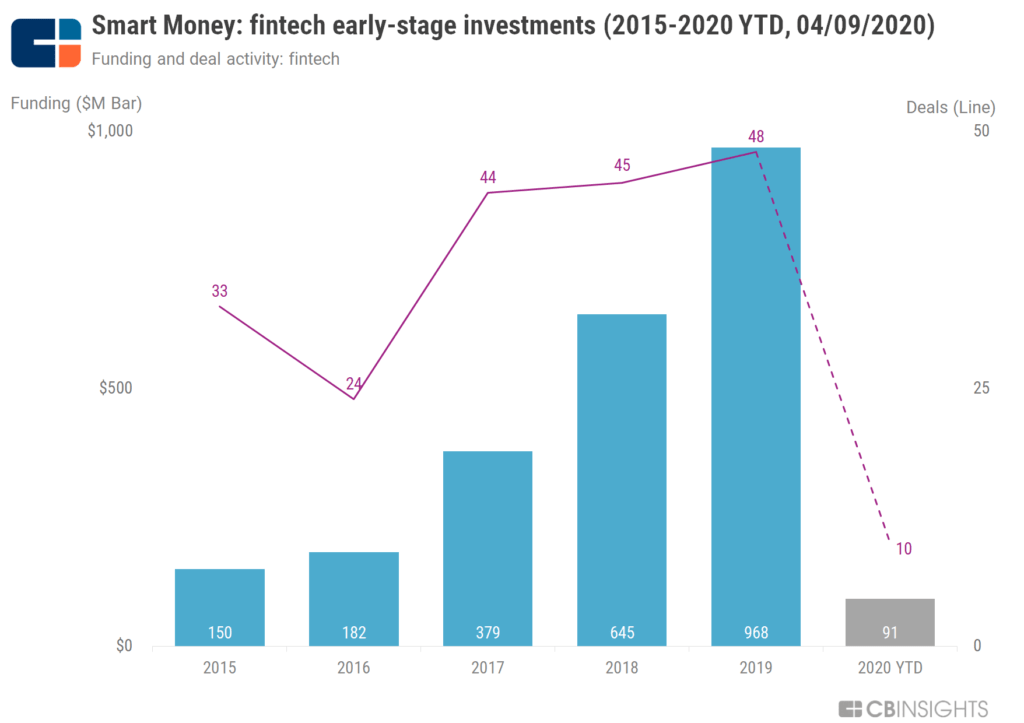 As we enter the 2020s, Smart Money investors will likely continue shifting from other consumer-focused investment categories to fintech apps.

Over the past 5 years, the top 25 VC firms, as defined by the CB Insights Smart Money list, invested in around 1,600 early-stage startups. The most promising startup founders are often drawn to these top-tier VC firms by a nebulous combination of reputation, resources, access to talent, and past performance. Our methodology for the Smart Money list has captured this combination of factors, which goes beyond returns and prestige rankings used for many comparable lists.

The Smart Money list is an unranked collection of the top 25 venture capital firms worldwide. We crunched the numbers for over 2,200 VC firms in the CB Insights database to surface the highest performing investors based on our methodology (more on that below).

What makes a VC “smart”?

Our methodology factors in portfolio company outcomes, the ability to consistently deploy capital, and portfolio quality. These factors capture the combination of a firm’s network and access, scale and repeatability, and profitability that make VCs “smart.”

What can I do with this collection?

Which VC firms are on the Smart Money list?