Research Brief
4080
Advertising and e-commerce are out, AI and insurance tech are in. These are the industries that have the eye of elite venture investors.

“Smart money” VCs have an enviable investment history, with a pattern of successful exited companies and high returns. And these firms’ portfolios can provide important indicators of where tech and innovation is going.

So where is smart money going? We crunched the data to identify where smart money VCs are investing in early-stage companies in recent years and how that investment focus has shifted.

Using CB Insights’ natural language processing, we identified the most common words used in company descriptions among those companies that received early-stage investment from a smart money VC between 2010-2016. We then looked at which words have trended up and down among this cohort over the years. In addition, we identified the categories and industries that are seeing the most smart money early-stage investment. Through this lens, we can see where top investors see the most potential.

Among our top findings:

Overall we see that smart money VCs have notably slowed down their early-stage activity over the last two years, ahead of the overall slump in VC activity.

From 2010 to 2014, the volume of smart money investments steadily rose. But in 2014, that number declined for the first time since we began collecting data. 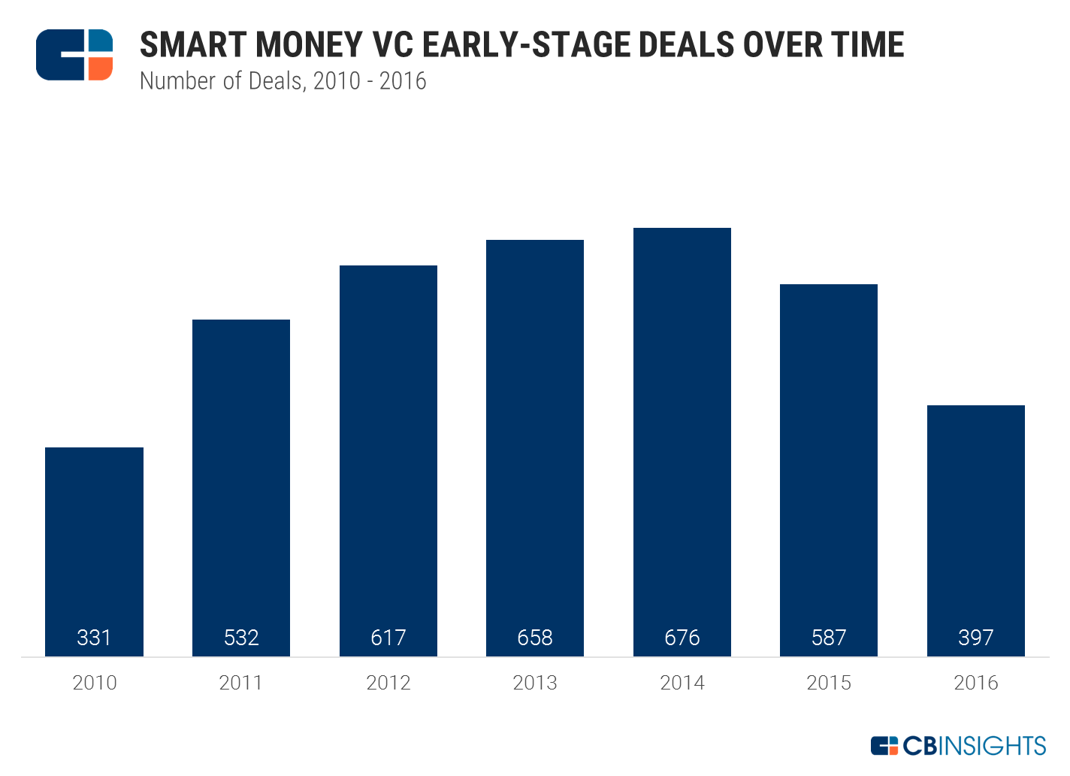 In this brief we’ll take a deep dive into smart money VC activity, identifying the most active smart money VCs and where they’re located, where smart money VCs are investing at the category, industry, and sector level, and how early-stage investments focuses have shifted.

Who are the smart money VCs?

The below chart identifies them and ranks them by the number of deals they have completed since 2010:

The next largest hotspot for smart money is in the greater Boston area, which houses four VC firms that account for nearly 15% of smart money deals. Only one smart money firm is located in New York.

To understand not only overall smart money trends, but where these VCs are placing their bets we looked at the most common keywords in descriptions of startup companies that had early backing from smart money VCs. 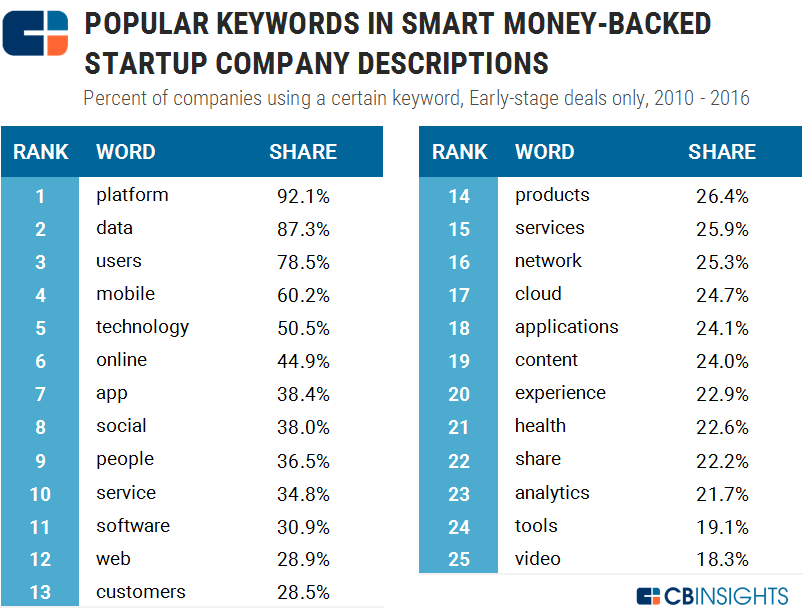 But more importantly, have trends in the keywords used by companies with smart money investors changed as well? We looked at the biggest increases and decreases in company description keywords since 2010 to find out. 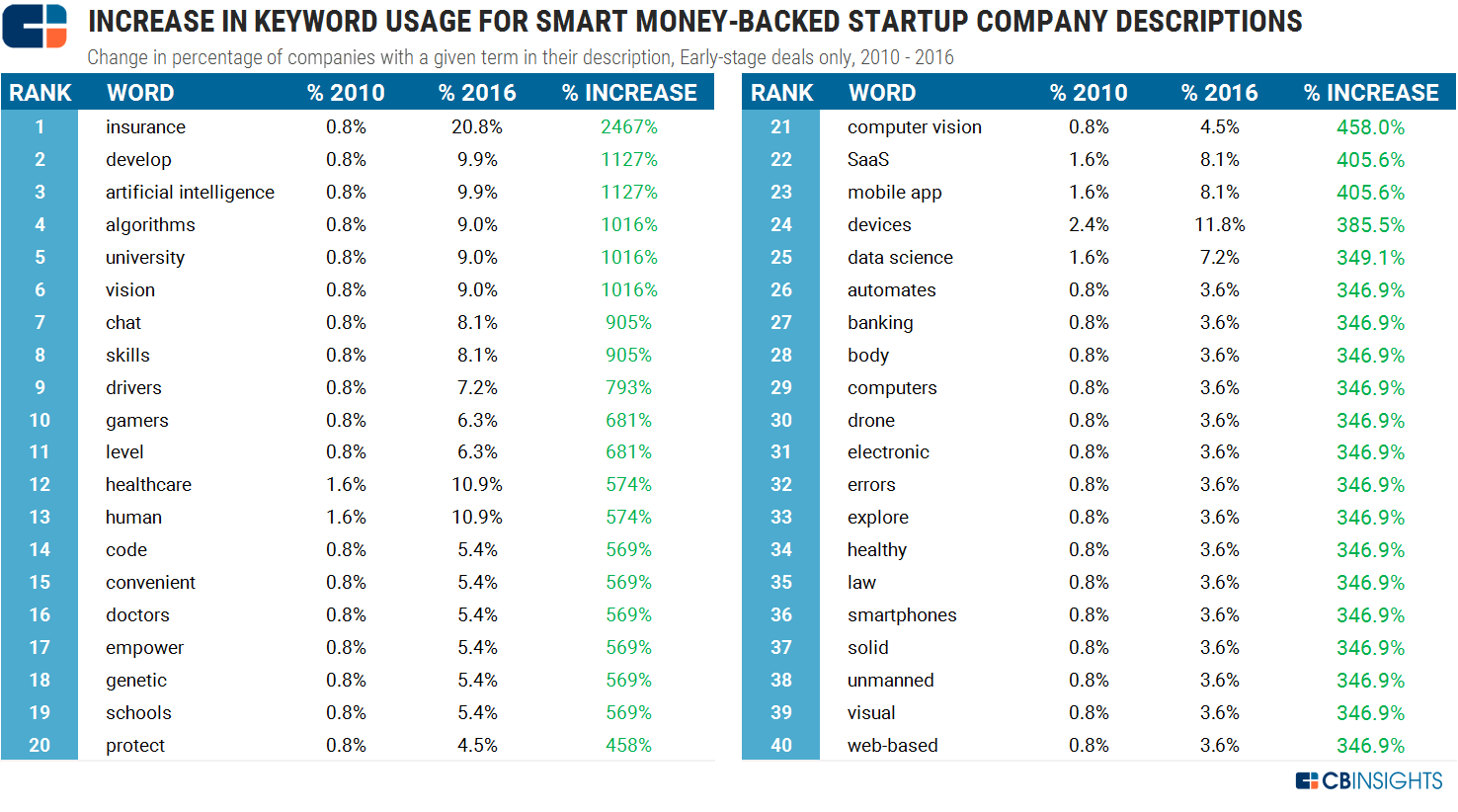 The keyword “insurance” has grown nearly 2500% in its appearance in descriptions of companies receiving smart money VC investment since 2010, a trend that is in keeping with the rise in overall deals to the insurance tech sector. Similarly, “healthcare,” “doctors,” and “healthy” have each seen their use in descriptions rise, mirroring the steady increase in digital health investment over the same time period.

The keyword “artificial intelligence” has also risen by over 1000%. AI companies hit a record for both deals and dollars in 2016. 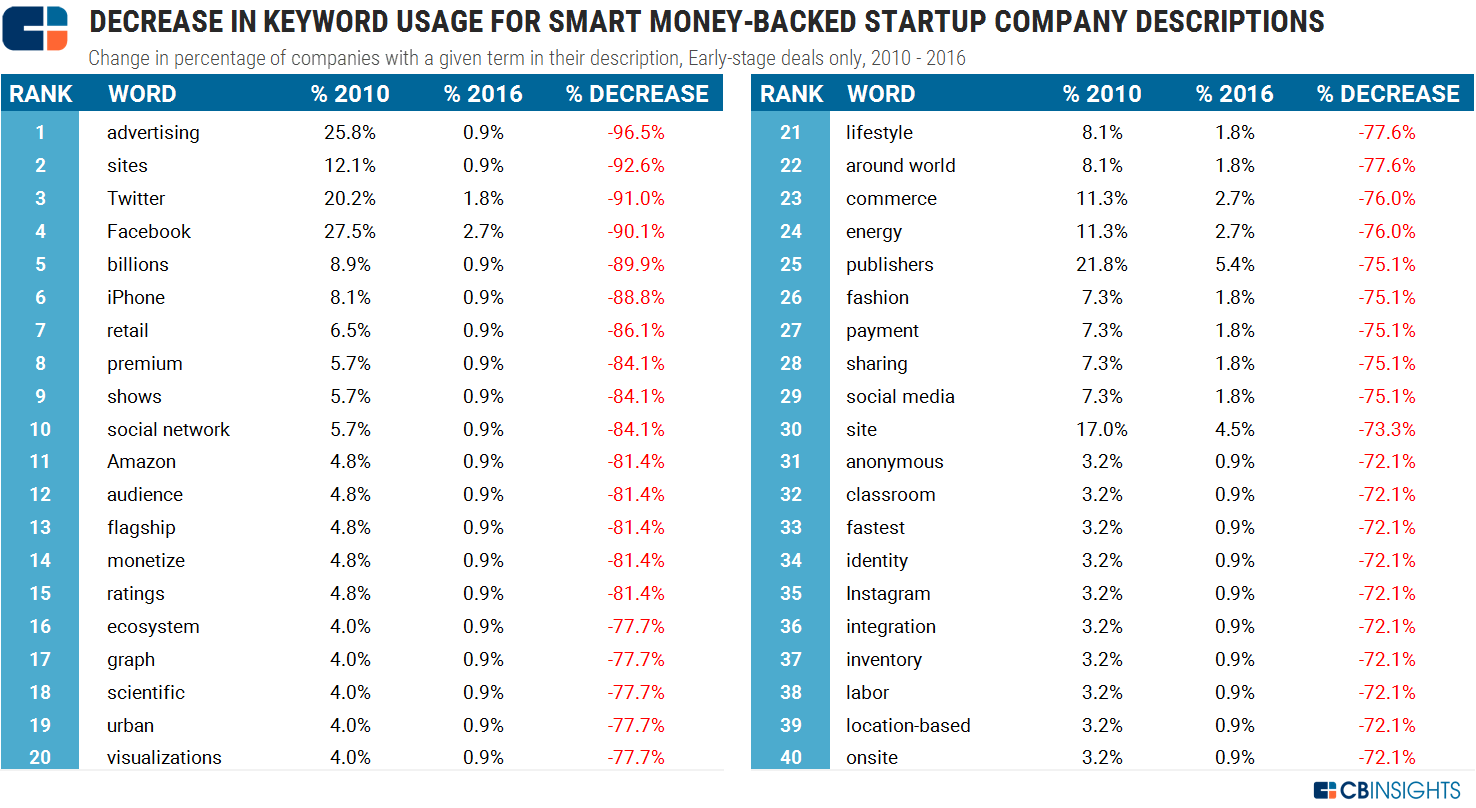 Meanwhile, “advertising” has seen its appearance decline by almost 100% over the time period. Dips in usage of “Twitter,” “Facebook,” and “Instagram” mirror the decline in early-stage deals made to companies in the social category discussed below. Declines in the use of “Amazon” are in keeping with a similar decline in the e-commerce industry, and the declining usage of “energy” underscores the decrease in investment in the energy and utilities industry.

Where smart money invests: By category 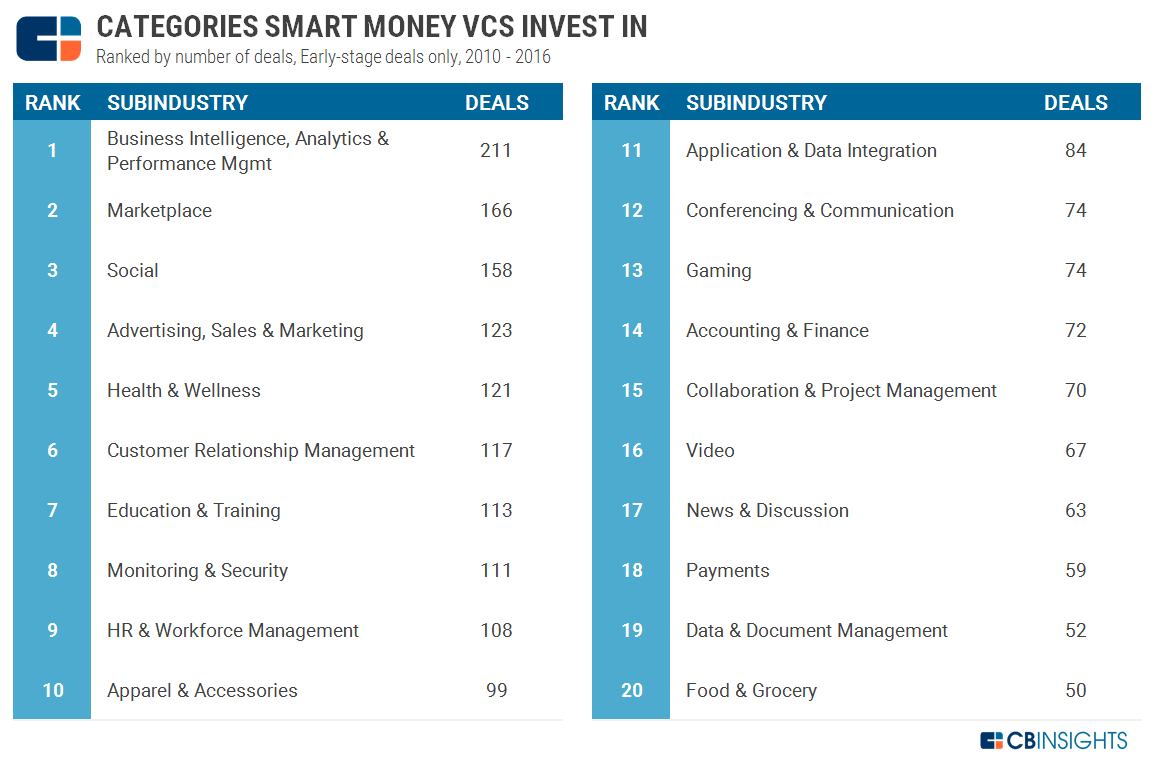 Business intelligence, marketplace, and social companies received the most smart money investments between 2010-2016.

Have business intelligence companies, such as Palantir and Ayasdi, always taken the biggest share of smart money deals among subindustries? We looked at how investments have changed over the time period.

Social may account for the third-most smart money investments since 2010, but social deals have declined since a surge of investments including deals to Pinterest, Snapchat, and NextDoor.

On the other hand, health and wellness are on the rise, with more than 100 smart money-backed deals since 2010 to companies like Honor, a website that connects home caregivers with aging patients, and Docent Health, a healthcare technology platform.

Categories including food and grocery (Blue Apron), collaboration and project management (Slack), and cybersecurity (Cyence, Virtru) are also on the rise. In contrast, gaming (Oculus) and video (Vessel, TasteMade) continue to see a decline in deals. 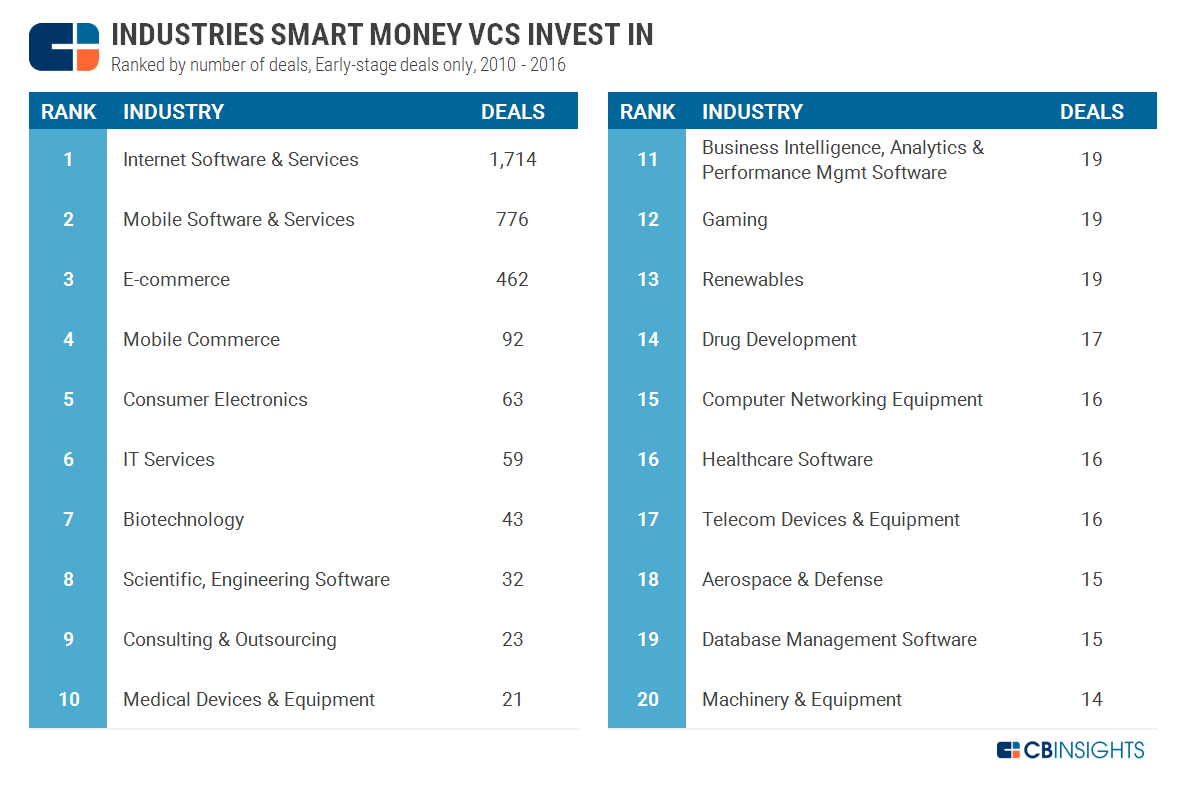 But these VCs are not just investing in apps and software. Other notable industries on the list include biotechnology and consumer electronics.

How have these investment patterns changed over time? We looked at the change in number of deals in each industry since 2010.

Internet and mobile software & services, the two industries with the most smart money deals and dollars, have had mixed trends since 2010. Internet software deals peaked in 2012 and have been slowly declining; mobile software peaked in 2013 and has similarly declined. E-commerce, the industry with the third-most deals, has shown an especially pronounced decline since 2012. 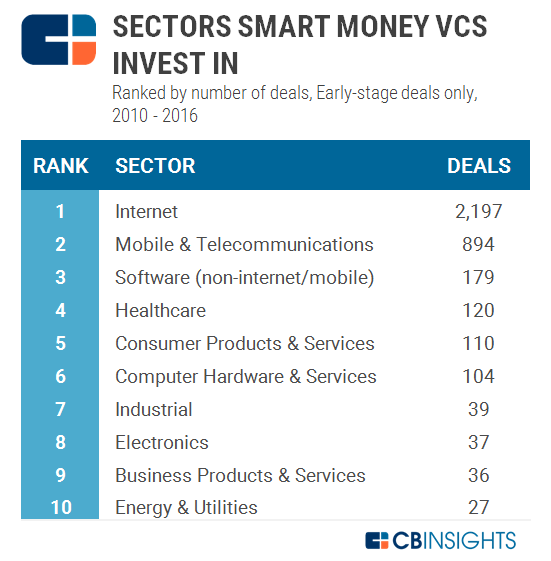 At the broad sector level, smart money VC firms have made the most early-stage deals to internet companies, at over 2,000. This sector includes companies like Pinterest, GitHub, Airbnb, Slack, Wayfair, and Jet.com.

The second-largest early-stage investment sector for smart money VCs is companies are in the mobile sector, which includes smartphone-centric companies like Snapchat, WhatsApp, Uber, HotelTonight, and Flipboard.

Have these patterns stayed consistent since 2010? We compared each sector’s number of early-stage deals by year to find out. They are categorized into increasing, decreasing, or mixed-trend groups based on change from 2010 to 2016. 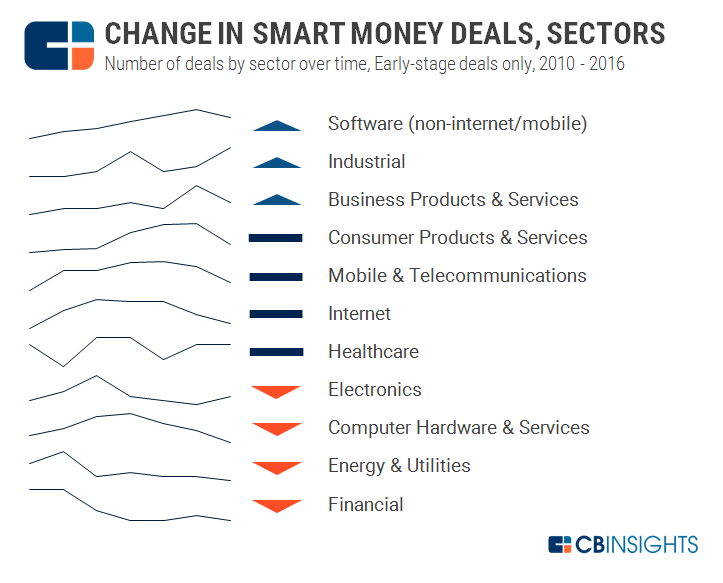 Deals in the non-internet software sector, including to companies such as Magic Leap and MongoDB, have increased between 2010-2016, along with investment in industrial companies and business products and services (which includes mostly consulting and outsourcing companies).

Want more data on smart money VC activity? Log in to CB Insights or sign up for free below.