We took the seed investment activity of the top venture firms based on our tech unicorn VC analysis and Investor Mosaic models and analyzed how often the smart money’s seed investments received follow-on financing or got acquired. Specifically, the VC firms who had over 10 seed investments since 2008, which we analyzed include:

In terms of follow-on rate we looked at all seed investments from 2008 to 13 months ago, and analyzed the percentage of those investments that went on to raise a series A or be acquired. Sequoia Capital led all investors, with an 87% seed follow-on rate. Sequoia’s notable seed investments include Y Combinator alums Stripe and AirBnB, both of which have garnered $1B+ valuations.

Redpoint Ventures ranked second as the only other firm with a seed follow-on rate above 80%. First Round Capital rounded out the top 3. 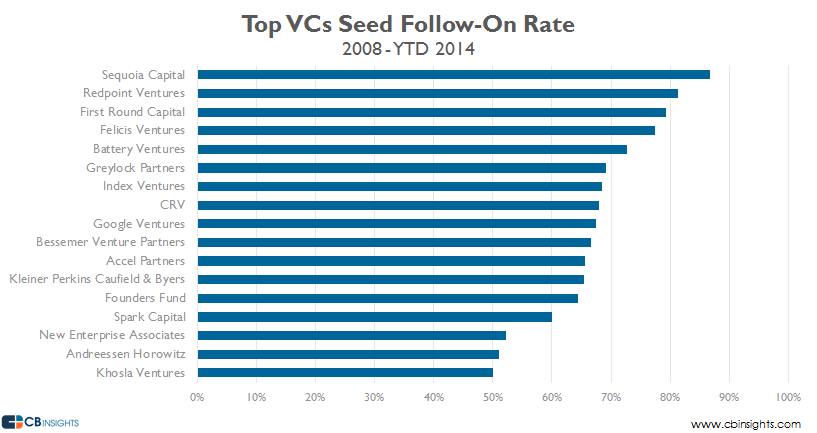 Of the companies that went on to raise follow-on capital after their seed round, we wanted to look if the original smart money VC invested in that follow-on round — what we call the seed re-investment rate.

While 60% of Spark Capital’s seed investment got follow-on funding, 91% of those received follow-on investments in their next round from Spark. These companies include Timehop, which recently raised a $10M series B from Spark Capital after a significant jump in its app ranking.

Battery Ventures ranked second, while Accel Partners rounded out the top 3 with notable investments in Birchbox and Slack, which raised $43M at a $250M valuation in April 2014 from Accel, Andreessen Horowitz, and others. 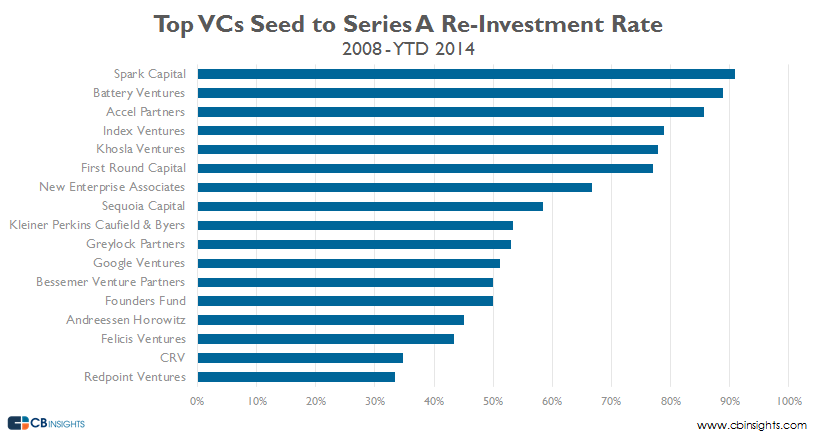