As smart home assistants such as Amazon’s Echo, Google Home and the latest, Apple’s HomePod, debut, more homes are being equipped with devices to control smart home products. These products range from smart home security systems to connected appliances that can be operated and managed remotely.

We define “smart home” startups broadly to include companies producing consumer-facing products that replace or augment existing home products such as appliances. These products must connect to a smartphone or the internet, or integrate sensors and digital interfaces.

So far, 2017 has seen approximately $188M invested across 28 deals. At the current run-rate, smart home startup investment activity is projected to hit 65 deals worth $435M, a 29% decrease in deals and 42% fall in funding from the year prior.

One of the top investments so far in 2017 was a $109M Series D in Q1’17 that went to Ring, a Wi-Fi enabled doorbell that streams live video of a home’s front doorstep directly to a smartphone or tablet. The investment valued the company at $431M and made Ring the third highest-funded company on our list ($204M total funding) behind Vivint and Sonos. 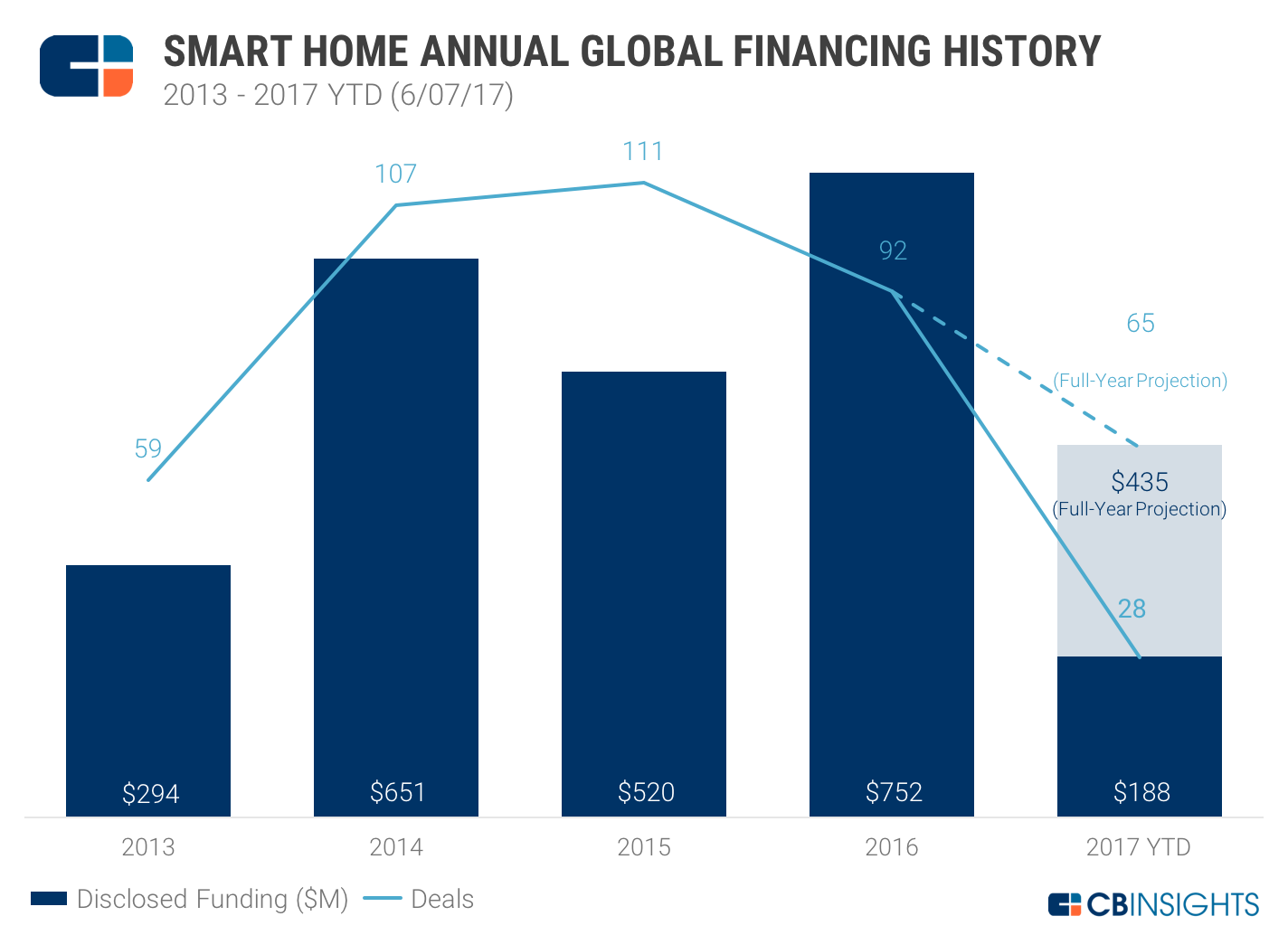 On a quarterly basis, investments to private smart home companies have generally been on the decline since peaking at 39 deals in Q4’14. Since then, deals have fallen down to the high teens, with Q1’17 seeing only 15 deals, the lowest quarterly deal total since Q3’13. So far in Q2’17, the largest deal has been the $17.7M Series C to August Home.

Q4’14’s record for deals was driven by a surge of <$1M fundings making up 41% of deals in the quarter. However, that quarter also saw a funding high driven primarily by a $130M Series E investment to wireless music systems manufacturer Sonos, with participation from smart money VC Index Ventures, among others. 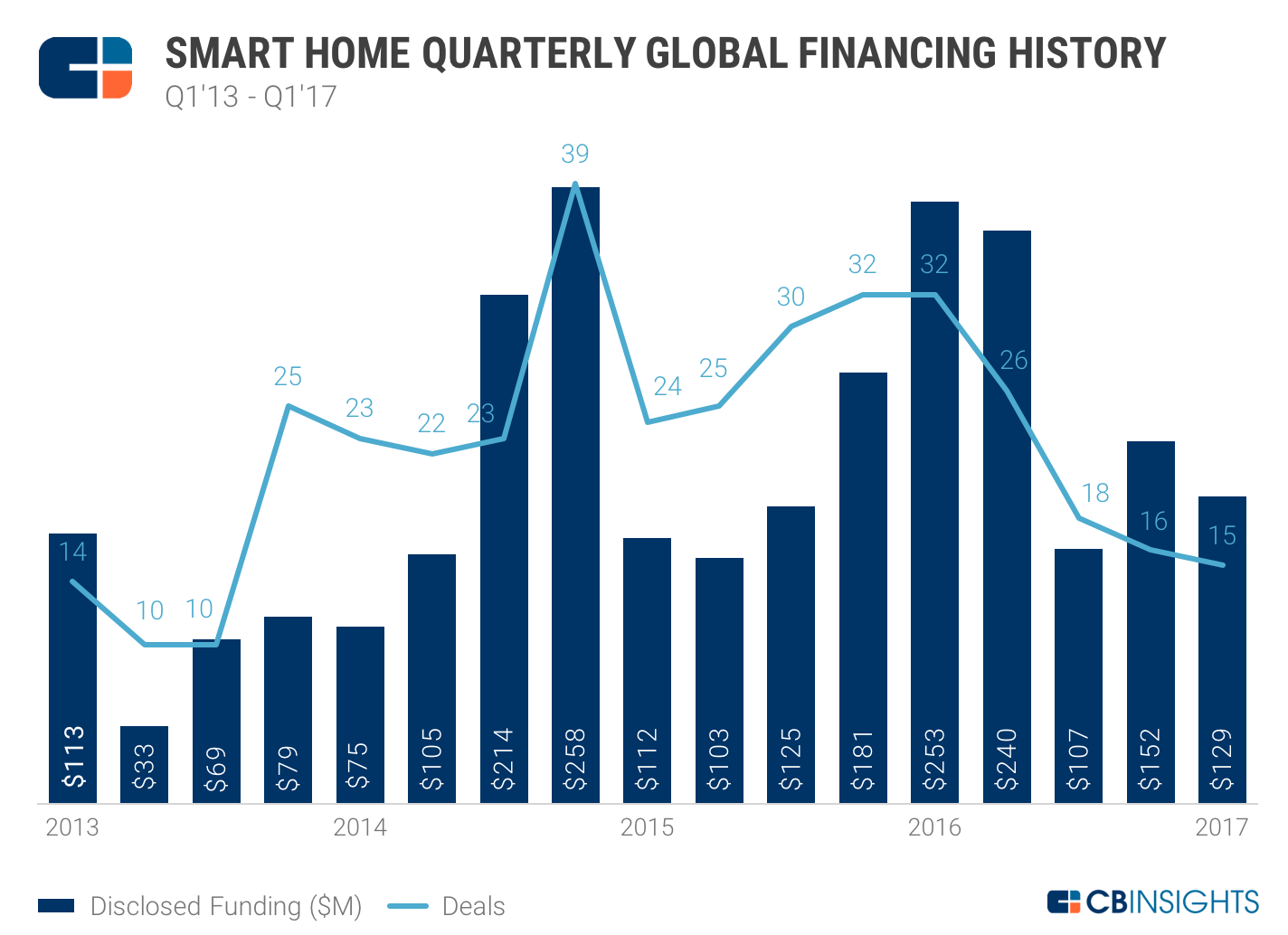 Startups are creating new ways to interact with everyday home products. Sign up for a free trial and look for Smart Home Companies in the Collections tab.

The top early-stage deal in 2017 year-to-date was a $5.5M Series A investment to Audio Analytic, a provider of sound recognition software and sensors embedded in the home to detect alarms or break-ins and monitor pets and children.

Late-stage deal share has already surpassed 2016’s numbers, increasing from 1% in 2016 to 8% so far this year. “Other” deals, including convertible notes and corporate minority investments, increased sharply from 15% to 25% in 2017 year-to-date. 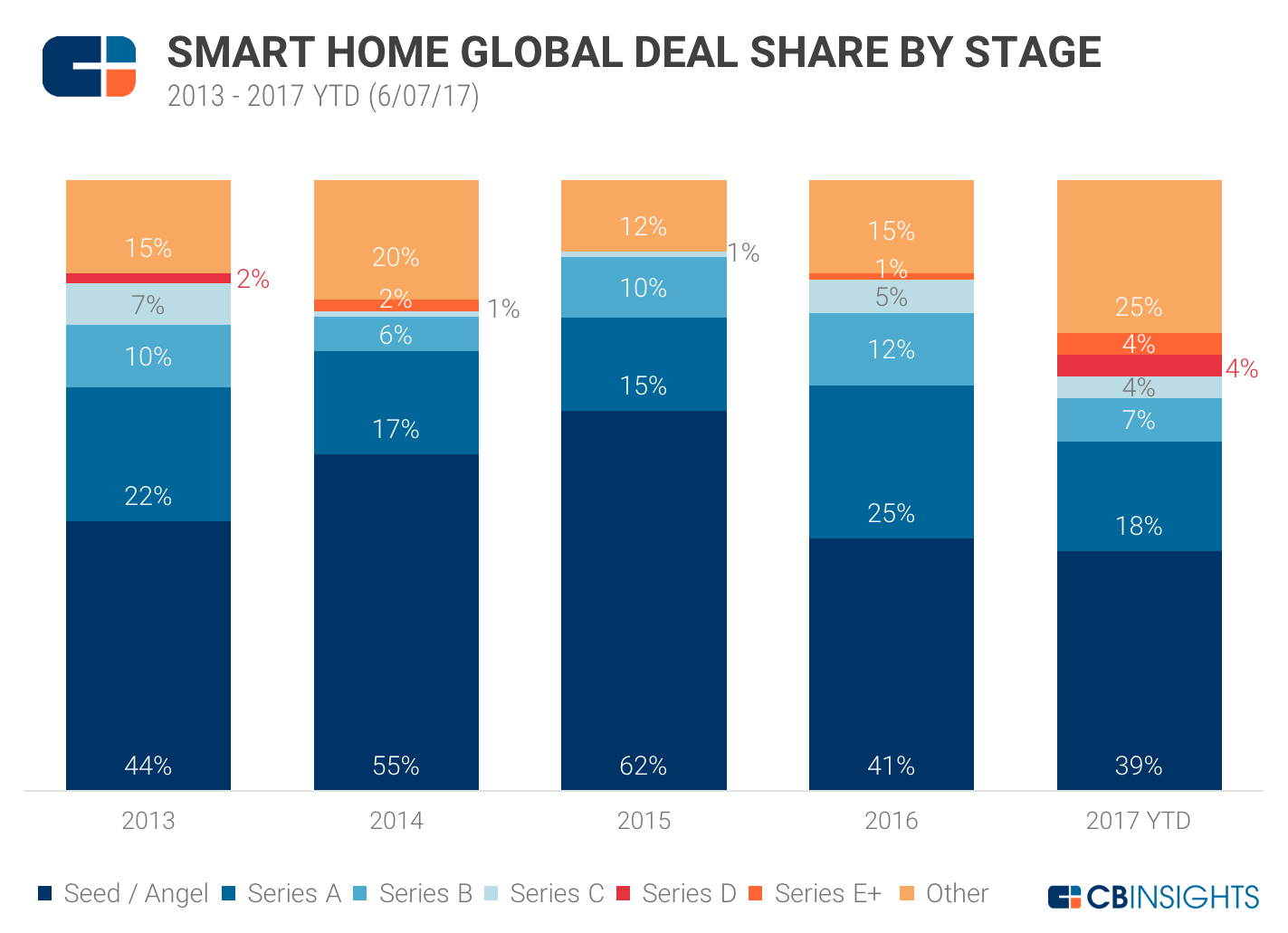