The larger internet of things industry saw its second-largest quarter for funding in Q1’16. The smart home category, meanwhile, has been slumping. But Q1’16 saw activity recover and reach more than 20 quarterly deals for the first time since Q4’14.

Using CB Insights data, we dug into funding trends for private companies in the smart home space, which includes all connected devices and internet software focused on enhancing the efficiency and performance of in-home appliances, as well as security, lighting, audio, and heating.

After a peak year in 2014 in both deals in dollars, financing to smart home tech dropped off significantly. 2015 saw a comparatively low $287M invested across more than 70 deals, which represents a 27% drop in deals and a 50% fall in funding year-over-year. 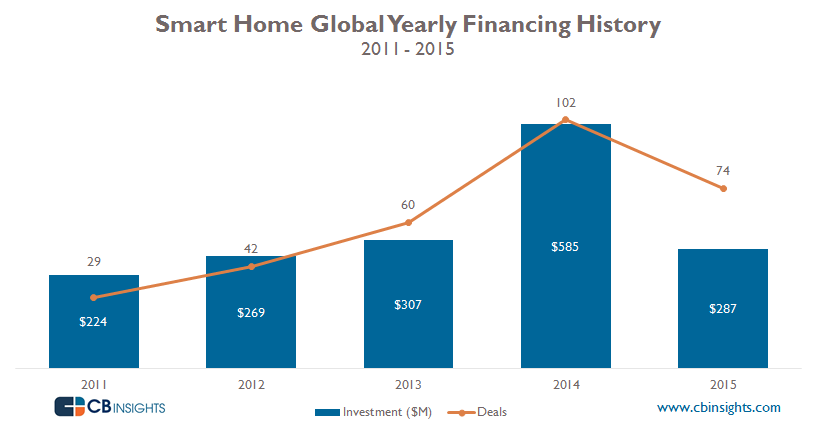 Looking at the quarterly trend of deals to private smart home companies, deals and dollars plummeted dramatically following Q4’14, going from an all-time high $221M across 36 deals down to $74M and just 20 deals in Q1’15.

Despite smart home funding slowing down in 2015, Q1’16 seemed to reflect a renewed interest in the space with deals growing by 60% to 24 and funding rising by 54% quarter-over-quarter. Notable deals in Q1’16 included smart doorbell Ring, which raised a $61M Series C from Felicis Ventures, Kleiner Perkins Caufield Byers, and Richard Branson, along with smart device platform Neura, which raised an $11M Series A. 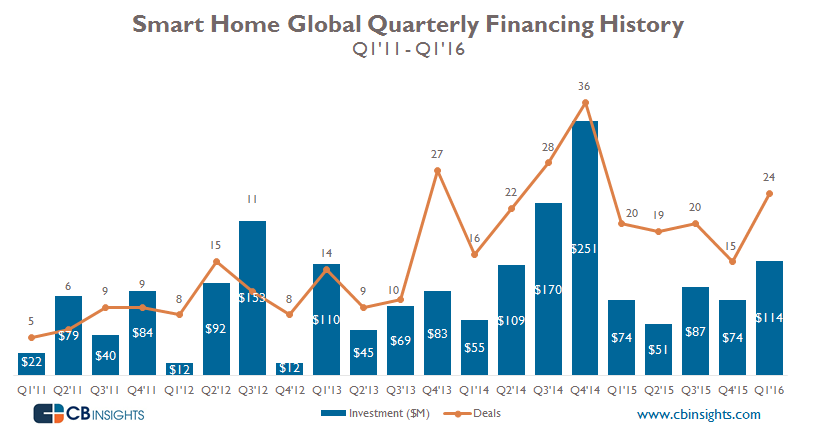