Though still well off the peak seen in 2014, when Google’s acquisitions of both Dropcam and Nest put the smart home category in the spotlight, funding to smart home startups has rebounded this year. At the current run-rate, funding to private companies in the space will end the year roughly 30% higher than the 2015 dollar total.

Deals, however, are on pace to end the year flat, and Q2’16 saw only 18 deals, the lowest total seen in two years.

Using CB Insights data, we examined funding trends to companies producing connected home appliances and devices, looked at deals and dollar allocation by stage, and identified the most active investors in the space. This report contains detailed information on:

Both deal volume and funding volume peaked in 2014. Around that same time, large corporates started getting involved, as exemplified by Google’s previously-mentioned acquisitions of Dropcam and Nest. At the current run-rate, deal activity to date in 2016 is projected to fall slightly short of the 2015 total. Funding this year is set to see a sizable 30% increase compared to 2015.

Although these deal and dollar levels are not as high as the peak in 2014, they would remain significantly higher than pre-2014 levels. 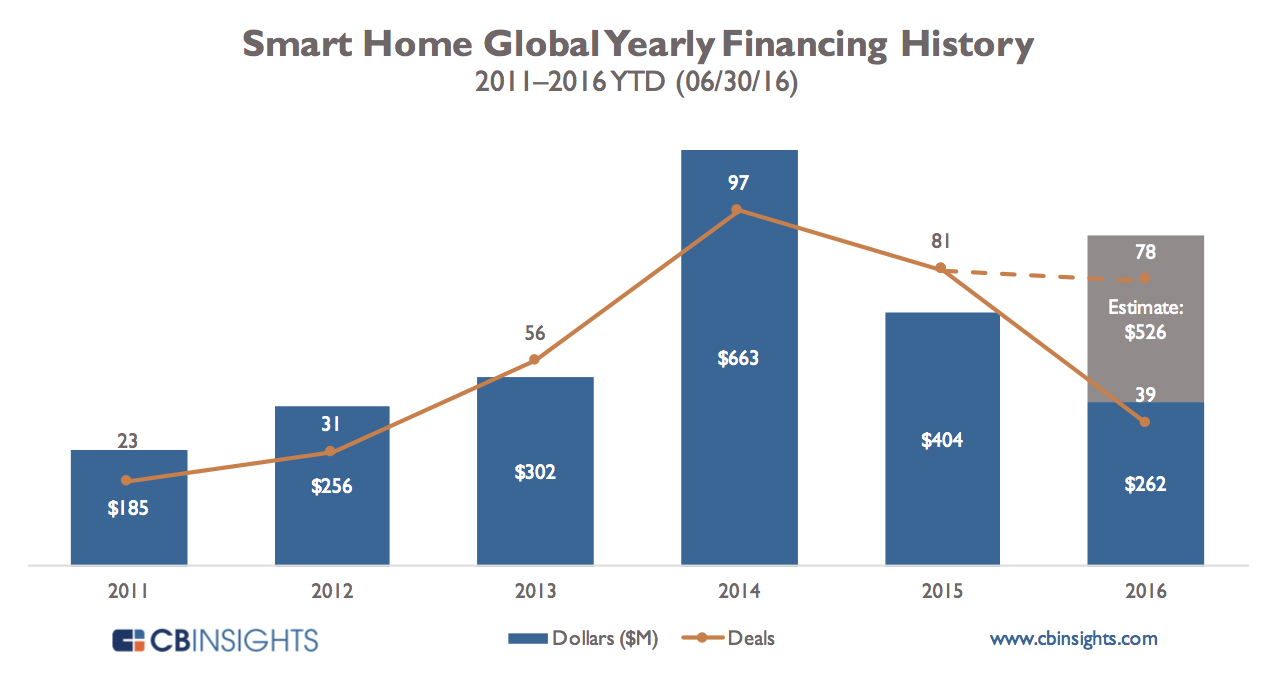 Quarterly deal volume and funding volume follow a similar trend to the above, peaking at Q4’14 before leveling off in subsequent quarters. Notable deals in Q4’14 included a $130M Series E round of funding for Sonos and a $40M Series C deal for wearables and smart bulb producer Misfit.

Interestingly, quarterly deal activity post-2014 was slowest in Q2’16, but funding activity was also the largest in the same quarter. From the previous quarter, deal activity in Q2’16 decreased by 14% but dollar funding jumped by 44%. That dollar rise was pushed by the largest deal for this period, a $100M private equity deal to Vivint. Other large deals included a $23M Series C round of funding for Tado and a $15M Series A deal for Sevenhugs. 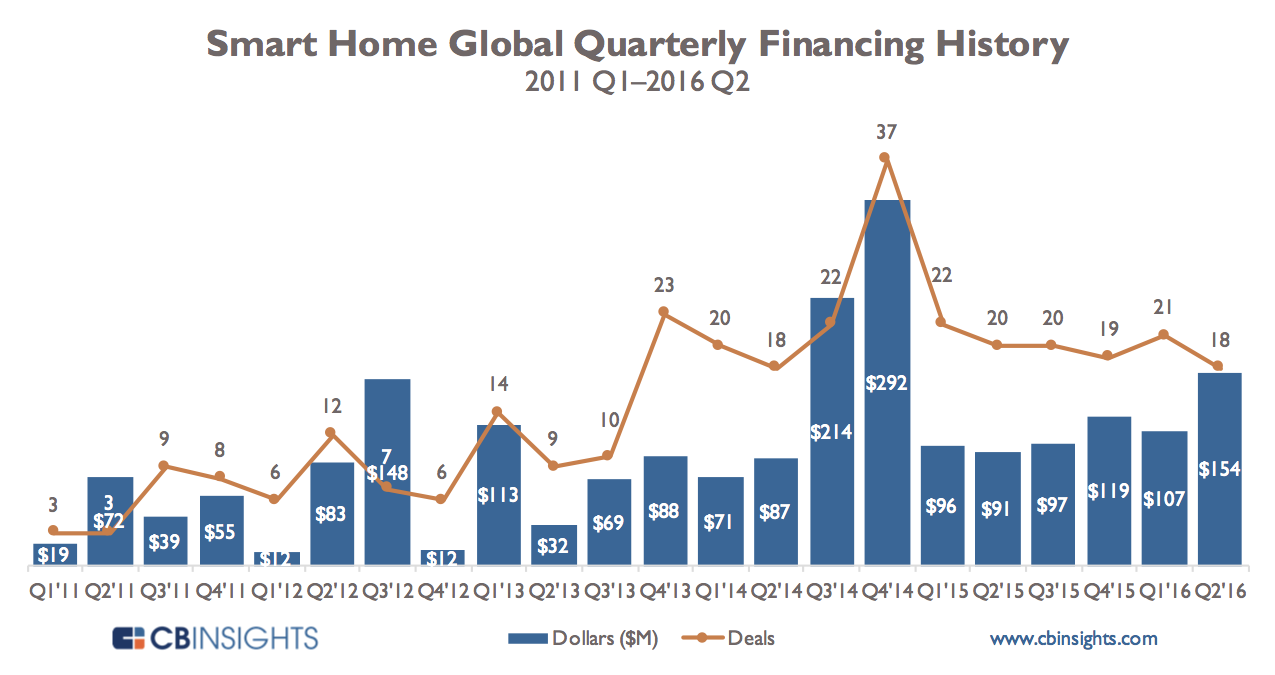 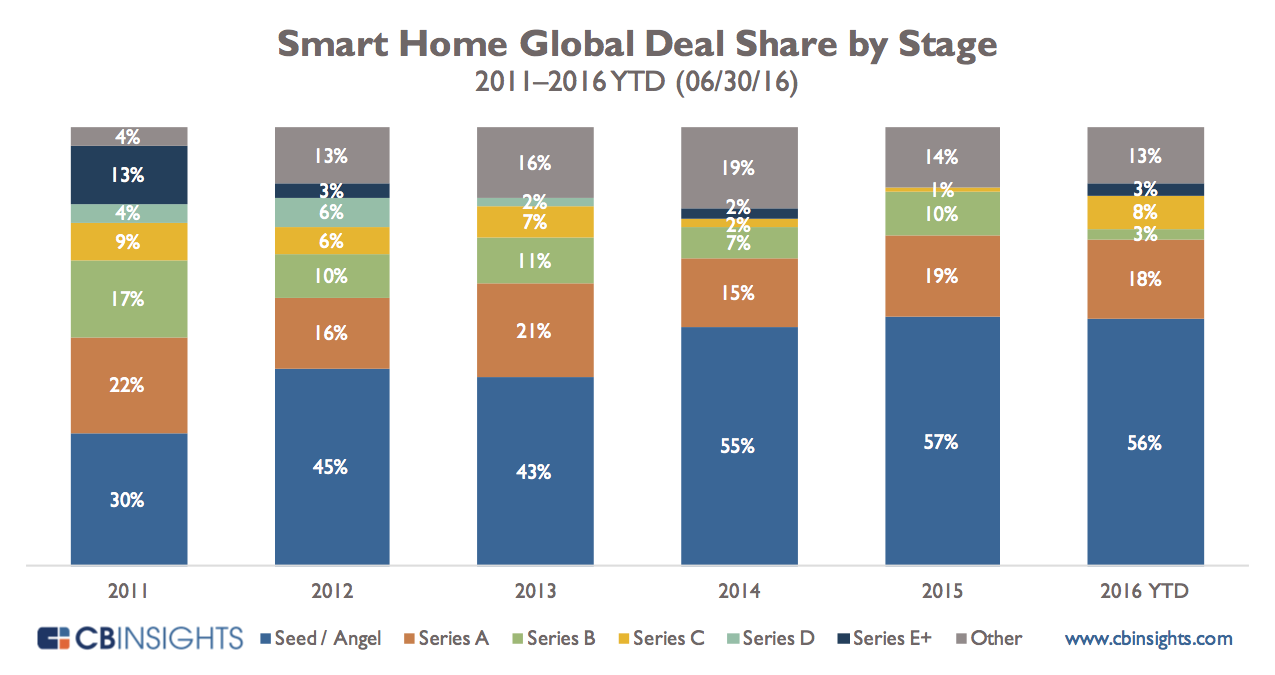 An interesting trend here is that early stage dollar share follows a similar trend to the total funding given out per year, rising to a peak 51% in 2014 before reducing back slightly. Middle stage dollar share remains fairly consistent throughout the period. And late stage deals in 2011 and 2016 are significantly higher than normal, seeing 77% and 82% of deals those years. Large private equity deals to Vivint in both 2011 and 2014, at $45M and $100M respectively, contributed to this large share. 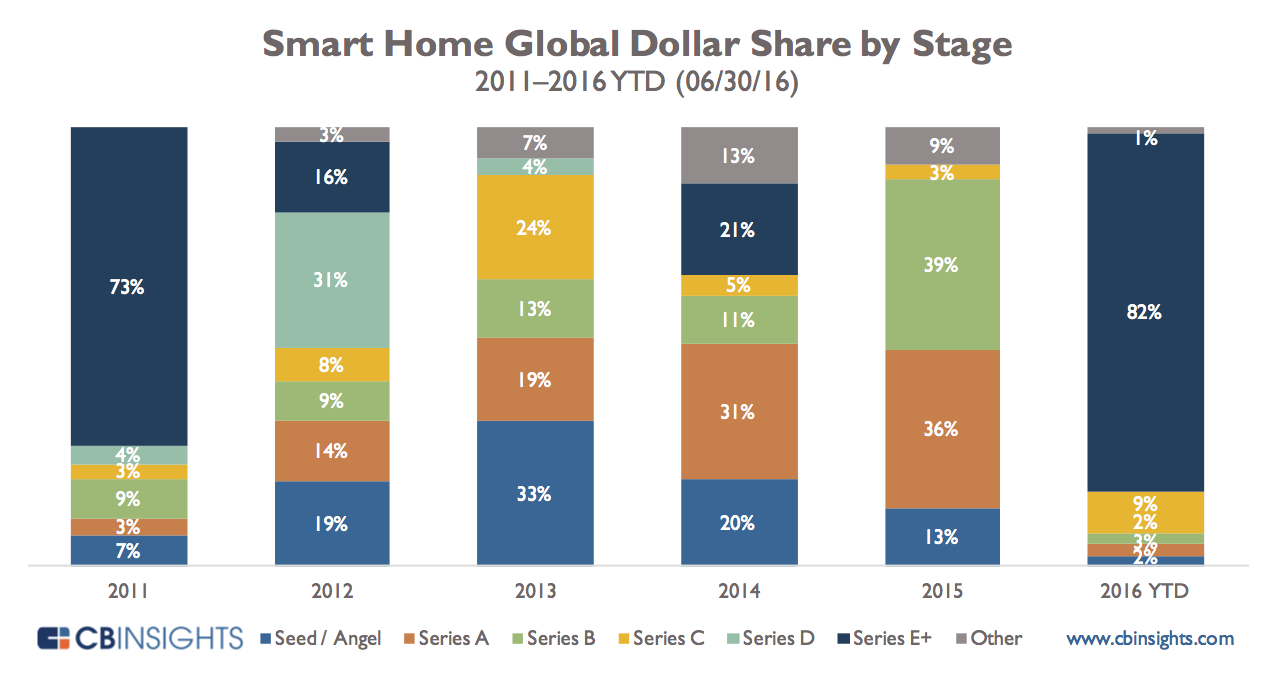 The most active investor ranking for the smart home category begins with a tie between American Family Ventures and Alexa Fund, both corporate VC arms. Each had 5 unique company investments in the space from 2011 to 2016. Rounding out the list are several esteemed VC firms such as Foundry Group, CRV, Kleiner Perkins Caufield Byers, and First Round Capital.

A similar list of investors appears when only early-stage deals are considered. This time, Alexa Fund tops the list by itself, with all five of its investments into the space being in the early stage.

Below are the 10 most well-funded companies in the space. Note that only equity financing is included in the total funding tally.

Want more data about top Smart Home companies? Login to CB Insights or sign up for free below.