After a significant drop in M&A activity in 2016, corresponding with a lull in funding activity, smart home exits appear to be on the upswing this year, with both corporates and startups, including Apple and Ring, snapping up private companies.

Smart home acquisition activity initially erupted back in 2014, with Google leading the charge by acquiring three private smart home companies over the course of the year. Samsung and ADT also acquired SmartThings (open platform for IoT) and Reliance Protectron (security monitoring and installation), respectively, that year. In addition, other companies including Icontrol Networks, iiNet, Central Security Group, and Infinova were also active acquirers in 2014.

Using CB Insights data, we analyzed M&A and IPO activity since 2013 among private smart home companies (examining only first exits), and created a timeline of acquisitions activity. Scroll down to see tables with M&A activity and the most well-funded companies at exit.

We define the smart home category as companies producing consumer-facing products that replace or augment existing home products such as appliances. These products must connect to a smartphone or the internet, or integrate sensors and digital interfaces.

Annual smart home exits peaked in 2014 with 9 M&A deals and 1 IPO for France-based AwoX, a company producing smart lighting, audio, and video devices for the home. M&A remained constant through 2015 with another 9 M&A exits, but no IPOs.

Then in 2016, M&A activity dropped off significantly, with only one-third the exits of 2015. 2017 is starting off stronger with 3 M&A deals already since the beginning of the year through 5/31/17, and no IPOs. However, while M&A activity dropped off significantly in 2016,  some prominent deals took place during the period, including the $191M acquisition of WiThings by Nokia in Q2’16.

This year’s corporate acquirers in smart home tech include Ring, electrical systems maker Hubbell, and Apple. One notable trend among these acquirers is their proclivity towards snatching up early-stage (Series B or earlier) smart home startups with less than $50M in total funding. In fact, 90% of smart home exits that occurred since 2013 had pre-exit funding of less than $50M. 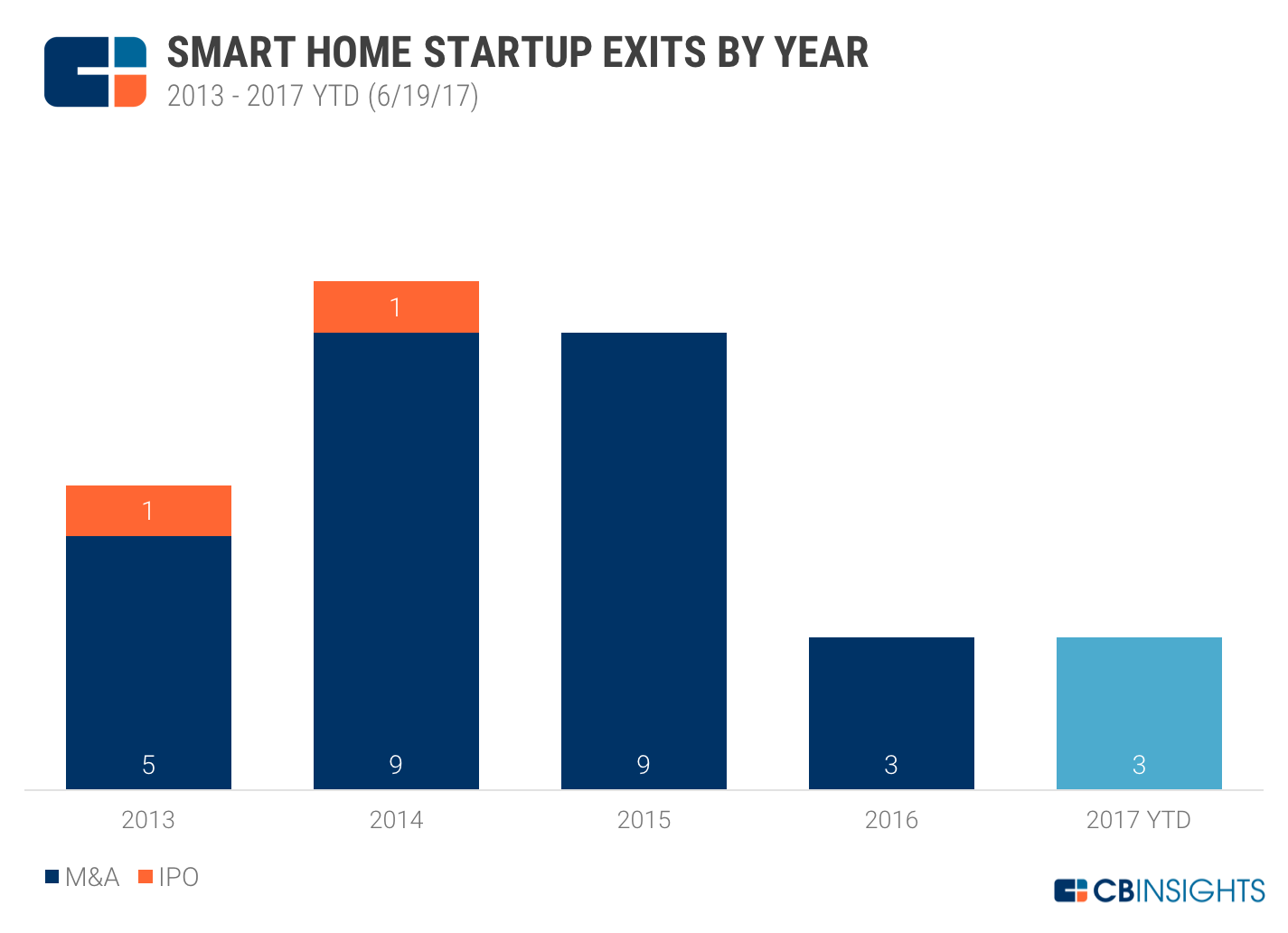 Of the 6 acquisitions we have seen since 2016, half of those acquisitions occurred this year. The most valuable smart home startup to get acquired since the start of Q2’16 is the health & wellness connected devices company WiThings, acquired by Nokia in April 2016, at a valuation of $191M.

One of this year’s notable acquisitions, as previously mentioned, was Ring‘s purchase of Zonoff. The acqui-hire came on the heels of Honeywell supposedly backing out of a planned acquisition at the last second.

Prior to its exit, Zonoff faced stiff competition from another private smart home startup Icontrol Networks, and public smart home company Alarm.com after the two competitors merged earlier this year.

Both companies were active acquirers over the period: Alarm.com acquired EnergyHub in Q2’13, and Icontrol networks acquired Piper in Q2’14. 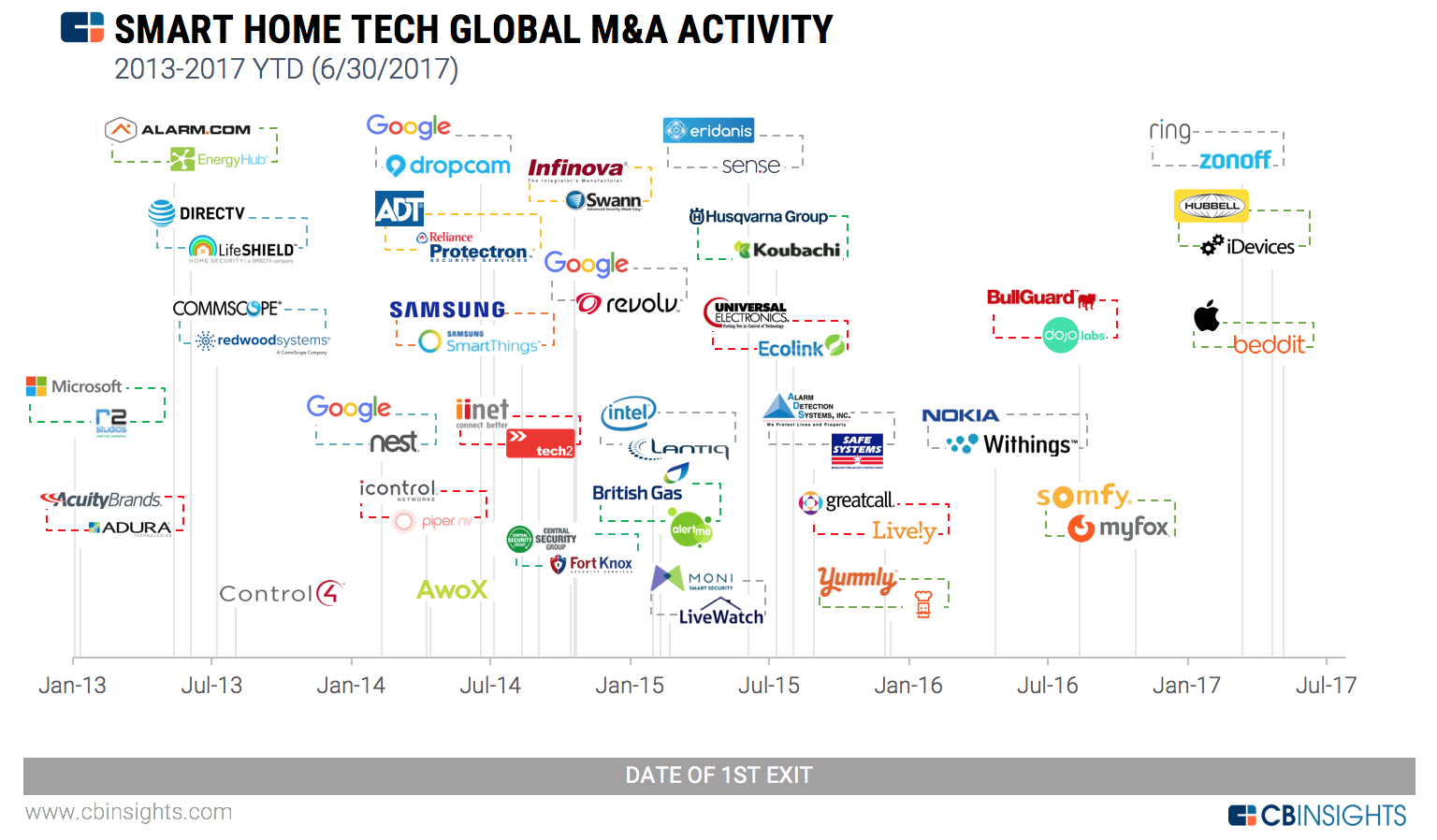 Based on disclosed funding, Nest Labs (acquired by Google) was the most well-funded VC-backed smart home startup exit since 2013 with $80M in total funding. It is followed by Control4, which is one of only 2 IPOs that took place in the smart home space during this period, followed by Dropcam, which was also acquired by Google. Rounding out the top 7 are Redwood Systems, Zonoff, WiThings, and Alert Me. The top 7 most well-funded companies all had over $30M in financing at exit.