Research Brief
1231
Silicon Valley doubles funding and deal volume in the last five years. The internet and mobile sectors attract the lion’s share of funding in the region.

Some believe that Silicon Valley is the only relevant market for technology investing, and it appears the region’s dominance is only increasing with both deal volume and funding doubling in the last five years.

This analysis provides an in-depth look at the tech financing and exit landscape in Silicon Valley as well as the investors and companies fueling the Silicon Valley tech startup ecosystem.

To put this number in perspective, in the the first six months of 2014, Silicon Valley has seen more tech investment than New York has seen in the last five years combined.

Before we dive in further, it is worth noting the following about this report on Silicon Valley tech: 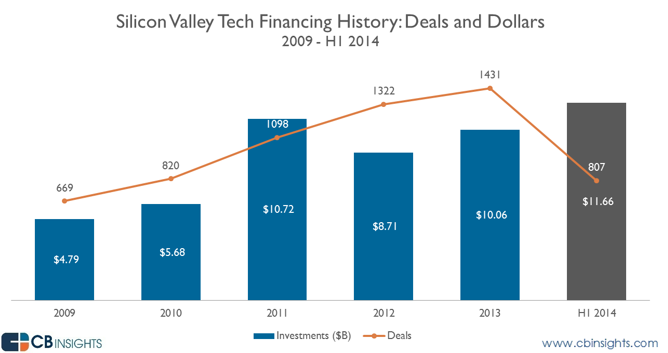 On a quarterly basis, the increase in funding to Silicon Valley has been buoyed by a number of notable funding rounds. Q2 2014 saw a peak in total funding, driven by the aforementioned funding rounds of Uber and AirBnB. Lyft, Uber’s primary competitor, also raised a $250M Series D in April, and Pinterest raised a $200M Series F in May. Q1 2014 was also a big funding quarter, the largest until Q2 2014, driven by Cloudera’s $900M Series F and TangoMe’s $280M Series D in March.

Early-stage dollar share has increased in the last five years, but mid- and late-stage deals still take the most dollars as is to be expected. The most super-sized Series A deal of last year was Vessel’s $75M in June but generally, Series A transactions have hovered where you might expect (<$7M). Late-stage activity has taken 51% of all dollar share in Silicon Valley funding in the first half of 2014, besting 2011 which saw late-stage SV deals take 47% of dollar share.

Although early-stage dollar share has remained under 25% as can be expected given these bets generally require less capital, its deal share has seen significant growth since 2009, particularly at the seed stage. From 2009 to 2012, seed deal share more than doubled and continued to hold steady in 2013 at 42%. There were also some super-sized seed rounds in the recent past. Notable mega-seed deals in the last year include Clinkle’s $25M round in June 2013 funded by Intel Capital and Accel Partners. LendingHome also raised a large seed round at $11.21M in November 2013 led by Foundation Capital. Late-stage deals have declined in deal share as their dollar share has grown, indicating an increase in average deal size which is consistent with the fact that the number of $100 million plus financing rounds increasing. 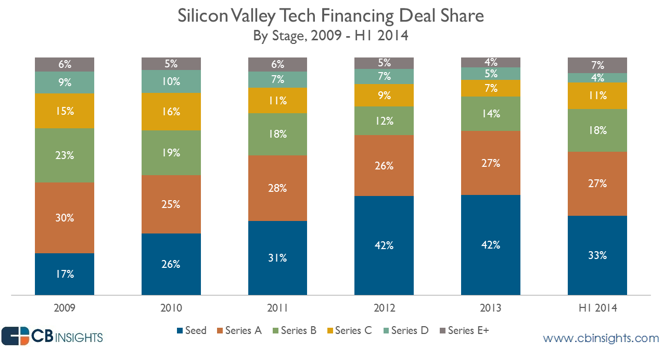 The internet sector has dominated dollar share in the last five years, peaking at 68% in 2011. Mobile & telecom has since taken some dollar share, growing from 14% in 2011 to 20% in 2013, driven primarily by a handful of larger deals like Uber’s $258M Series C in August 2013 led by Google Ventures and even Twilio’s $70M Series D in June 2013 led by Bessemer Venture Partners and Redpoint Ventures. Electronics which includes chips & semicoductors has seen the greatest decrease since 2009, falling from 14% of dollar share in 2009 to only 3% in 2013. This makes sense given chips & semiconductors were on their worst funding pace since 2009 recently. 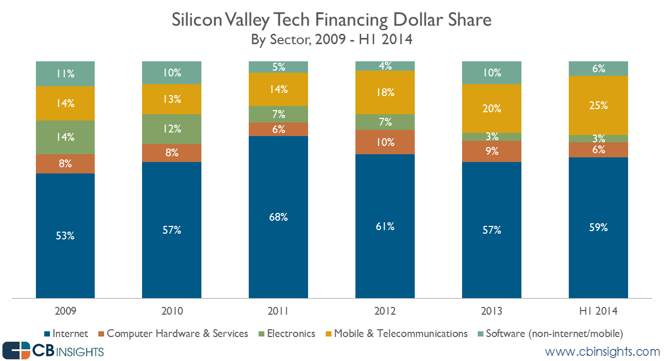 The internet sector has also consistently led deal share, which has remained very stable since 2009, only fluctuating by two percentage points. Computer hardware & services, electronics, and software have each decreased slightly, accounting for a combined 15% of deals in 2013. Mobile & telecom grew from 15% of deals in 2009 to 25% in 2013 as it takes share from sectors that are no longer en vogue.

Many recognizable names comprise the top 20 most well-funded tech companies in Silicon Valley, including Uber, the top company, with a little over $1.5B in total funding. It is one of seven mobile companies in the top 20. Mobile is the second most prevalent sector after internet, which accounts for half of the top 20, including the second most well-funded company, Cloudera. The company has raised a little over $1B since March 2009, with participation from Accel Partners, Meritech Capital Partners, and Google Ventures, among others. Others among the most well-bankrolled tech companies in Silicon Valley are Palantir Technologies, cloud storage competitors Dropbox and Box and Lyft, an Uber competitor. Note: Debt, secondary and lines of credit were not included under total funding.

The most active VC investor in Silicon Valley is 500 Startups with investments in hundreds of companies since 2009. It focuses many of its investments in the internet sector and almost exclusively in early-stage deals. Also among the top investors are SV Angel, another early-stage investor, Google Ventures, the top corporate VC in Silicon Valley by deal volume, and Sequoia Capital. Note: Investor league tables in this analysis covers micro VCs, venture capital firms and corporate venture arms. Incubators/accelerators such as Y Combinator are not included.

When breaking the league tables down by stage, 500 Startups, not surprisingly, also leads. 500 Startups’ top coinvestor is super angel SV Angel, which is the second most active early-stage investor in Silicon Valley. SV Angel’s investments include participation in GitHub’s $100M Series A in 2012 and AngelList’s $24M Series A in 2013. Although angels were not included in our investor league tables, Band of Angels was the most active angel group with over 35 deals since 2009. Band of Angels invests in a diverse range of industries, but focuses primarily on Silicon Valley for most of its deals. The most active individual angel investor we tracked is Paul Buchheit whose investments include food delivery service Instacart and travel site Hipmunk.

At the mid-stage (Series B/C), Intel Capital is the most active investor since 209. Its largest deals include participation in Kno’s $30M Series C and Kabam’s $30M Series C, both in 2011. Also among the top mid-stage investors is New Enterprise Associates with participation in Houzz’s $35M Series C in 2013 and DataBricks’ $33M Series B in June 2014. New Enterprise Associates’ top three coinvestors are Kleiner Perkins Caufield & Byers, Intel Capital, and Accel Partners, which are all among the most active mid-stage investors in Silicon Valley.

Although many of the largest and most well-known exits have been IPOs, including Facebook, Twitter, Zynga, and LinkedIn, the majority of exits are M&As. IPOs increased slightly from 4% of all exits in 2011 to 5% in 2012 and 2013. M&A represents 95% of exits, comprising notable acquisitions including Facebook’s acquisition of WhatsApp for $16B announced in February 2014, and Waze’s acquisition by Google for $1.15B in June 2013.

The top ten acquirers of Silicon Valley tech companies are all public tech corporations. Google leads the pack with the most tech acquisitions since 2009, including the aforementioned traffic information service Waze and mobile ad network AdMob. Google is also an active acqui-hirer in the region.  Facebook, the second most active acquirer, counts WhatsApp, Instagram, and face recognition software Face.com among its acquisitions.  Yahoo, at #3, is probably the most prolific acqui-hirer. It’s one notable deal was Tumblr which it purchased for $1.1 billion.

When looking at Silicon Valley tech exits by investor, Sequoia Capital has invested in the most exited tech companies, closely followed by Intel Capital and Accel Partners. Sequoia first invested in many of its exited companies at the early-stage, including WhatsApp and Meebo at Series A, and Palo Alto Networks and Instagram at Series B. Accel Partners also entered many of its investments early, most notably Facebook at Series A in 2005. 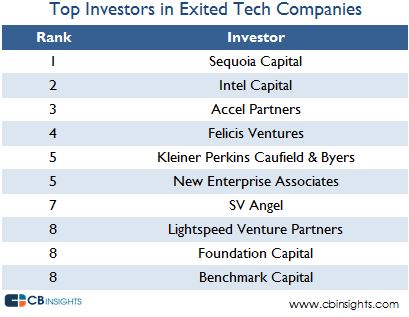 All of the data underlying this analysis of Silicon Valley tech is available on CB Insights. Create a free account below.