The good news — you have a much higher shot of raising a Series A. But if the smart money doesn't participate, you might be damaged goods.

While it might seem like a no-brainer to take seed money from a prominent venture firm, there is one prominent argument against it. The potential danger was memorably discussed by Chris Dixon, now of Andreessen Horowitz, in a 2010 post:

“ … investor signaling has a huge effect on venture financing dynamics. If Sequoia wants to invest, so will every other investor. If Sequoia gave you seed money before but now doesn’t want to follow on, you’re probably dead.”

Of course, at the time, as Dixon himself has acknowledged, the “signaling risk” hypothesis was a bit self-serving, since he was at seed VC firm Founder Collective, which had an interest in luring founders away from large funds. And in the past, our analysis of the impact of large VC funds in seed rounds didn’t support signaling risk

But we started to wonder, what if the signaling impact of large VC firms on a seed round is less a function of the VC fund’s size and more a function of the investor’s reputation? In other words, if a fund which is viewed in the ecosystem as “smart money” invests in your seed round and does not invest in subsequent rounds, are you dead-on-arrival?

So we looked at all seed financings from 2008 to June 2013 — allowing enough time for a company to raise follow-on funding — and looked at the effect that having a smart money VC invest in your seed round has on your follow-on prospects. We found that signaling is real: if a smart-money VC declines to follow on in a Series A, that does depress future funding success.


The graphic below breaks down the key data around smart money VCs investing in seed rounds and their effect on raising a Series A. 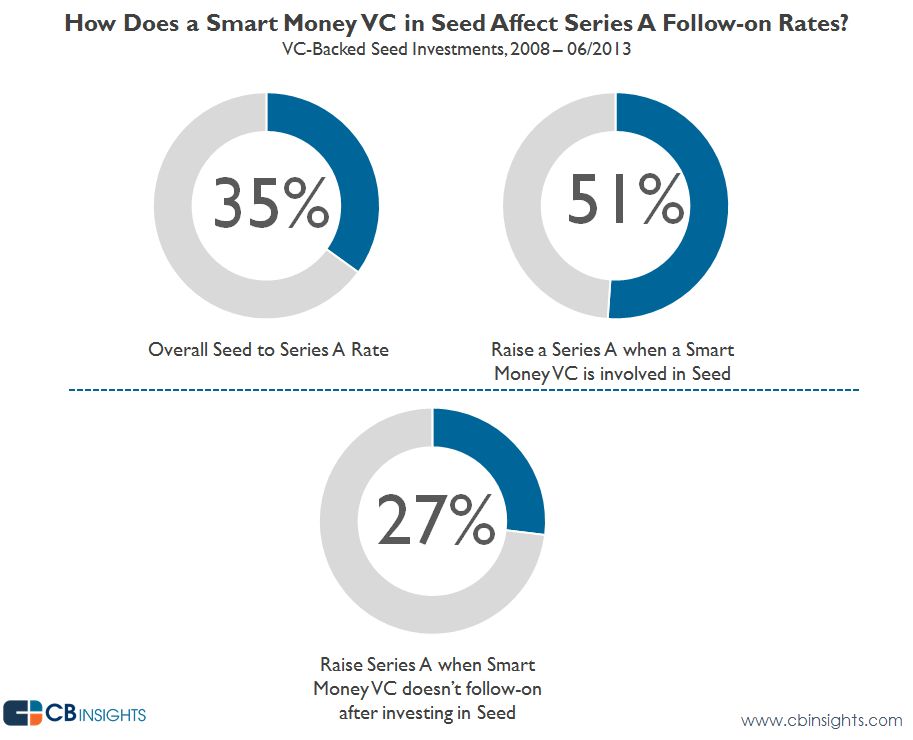 The row in the second chart shows:

To summarize, if a company is going to take smart money VC in their Seed round, they have much higher rates of raising follow-on financing in general. However, they better hope the smart money follows on, because while they aren’t “dead” as Chris Dixon says, their chances are below average if the smart money VC doesn’t participate in the Series A.

The list of smart money VCs used for this analysis were:

Want more data around early-stage financings? Login to CB Insights or sign up for free below.