Global tech Series A deals of $10M or more were up 64% in 2014, hitting a six-year high in Q4'14. Larger Series As are also raised at a quicker pace than overall Series A rounds.

Anecdotally, a number of VCs in the industry appear to be noticing a growing trend of increasingly larger Series A deal sizes. Josh Kopelman of First Round Capital, wrote the following in an insightful post on the seed funding boom and its implications:

Another, related trend we’re seeing is that startups are seeking larger and larger A rounds. It’s pretty clear that the market can’t accommodate it, yet we keep seeing companies setting out to raise $15 to $20 million Series A rounds — just a few months after they’ve raised their seed round. To invest $15 million, an investor needs to have 3x the conviction that that they have for a $5 million investment.

And this observation isn’t limited to U.S. startups. Bill Gurley of Benchmark recently quipped, “You’re seeing Series As in Malaysia of $18 million.”

Naturally, we wanted to see whether these anecdotes were borne out when we analyzed the data.

CB Insights data does show a noticeable spike in larger Series A deals in 2014. Global tech Series A deals of $10M or more were up 64% in 2014, hitting a six-year quarterly high in Q4’14. The rise of $10M+ Series A rounds is coming from all areas within tech from the on-demand economy (Luxe Valet, Handy, DoorDash) to bitcoin (Bitnet, Xapo) to ed tech (Clever, Delcara, Course Hero). Early last year, Nikhil Basu Trivedi of Shasta Ventures floated the term ‘Series A bifurcation’ – and that bifurcation appears to be escalating. (Note: If Series A rounds had multiple tranches or closes, those are combined as one round.)

The super-sized A is growing in popularity

While the surge in absolute number of super-sized Series A deals is readily visible, their share of total Series A transactions is also becoming larger.

As the data below highlights, the percentage of larger Series A deals ticked up to 17% of overall A deals in 2014 vs. 12% in 2012 and 2013. Overall, median Series A round sizes are showing a ‘plateau & rise trend’ – and hit $5M+ for the sixth straight month as we previously highlighted. 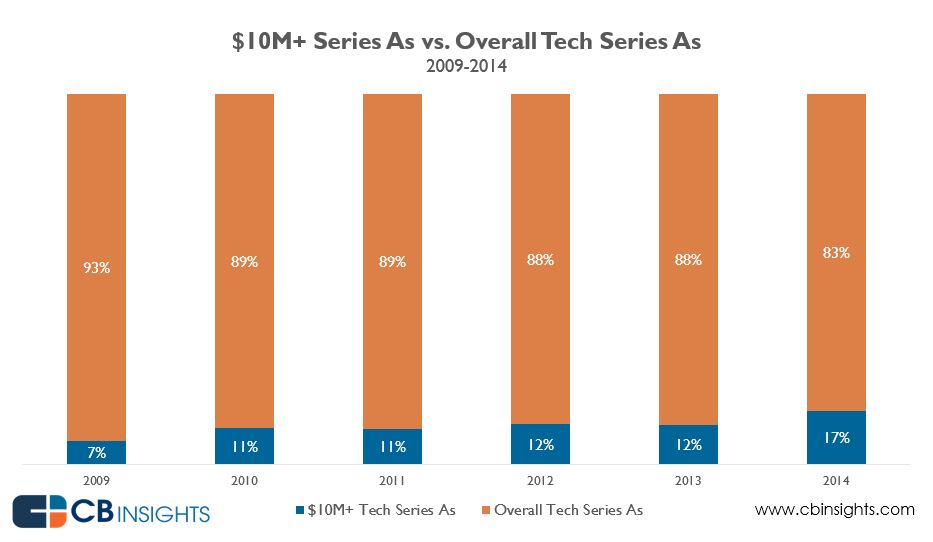 Lastly, does the data support that larger As tend to come sooner, or as Kopelman describes, “just a few months after they’ve raised their seed round”?

Looking at the data around tech Series A rounds raised in 2014, we see that 43% of $10M+ Series As were raised within a year of their seed financing. This is in contrast to Series A rounds < $10M where 33% happen within a year. With abundant capital available in the seed VC ecosystem and private markets in general, investors are increasingly willing to fund big A rounds for companies with momentum. 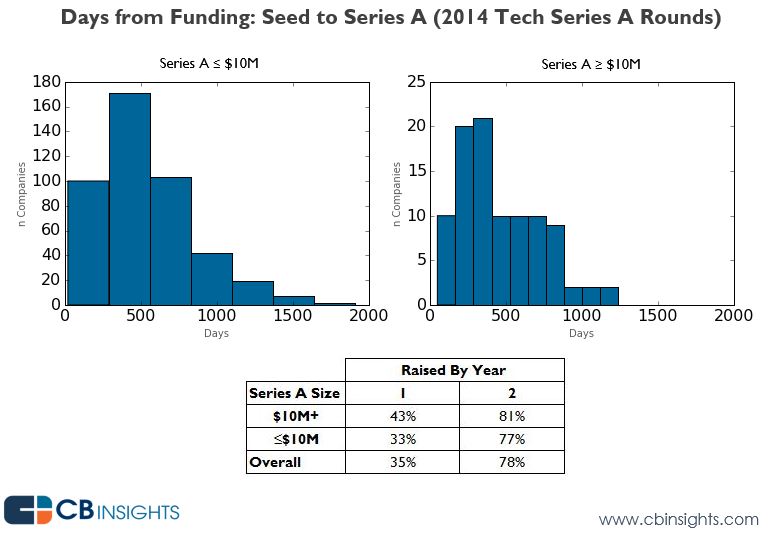