Sequoia Capital is one of Silicon Valley's storied VC firms. A glimpse into their financing and exit data reveals where the firm sees opportunity.

This teardown features annotations & commentary by four Sequoia Capital partners. As in all teardowns, the data analyzed comes from CB Insights. Thanks to the Sequoia team for updating/confirming their portfolio data on the CB Insights Editor.

Sequoia Capital is one of Silicon Valley’s most storied and enduring venture capital firms, investing in the likes of Apple, Cisco and Google among others throughout its 44-year history. When we asked VCs to rank each other as part of our top 100 VCs ranking with The New York Times, Sequoia came out on top of the firm-level ranking.

Despite a lackluster environment for venture-backed IPOs, Sequoia continues to consistently find itself in venture capital’s largest exits including AbbVie’s acquisition of cancer drug startup Stemcentrx in April 2016 for as much as $10.2B. Stemcentrx’s acquisition was the second largest VC-backed M&A exit of all-time after WhatsApp‘s $22B acquisition in 2014. Sequoia was the sole venture investor in WhatsApp.

“Credit to Brian and Scott, special founders who accomplished something almost unparalleled in the biotech field, and to their earlier investors like Founders Fund. We partnered when it was much more clear that they were developing a truly revolutionary approach to treating cancer.”

Since the start of 2015, Sequoia has notched six M&A or IPO exits with valuations in excess of $500M at the time of exit, including the public offerings of Square, SunRun, and Natera. The other $500M+ exits are the acquisitions of Jasper Technologies and OpenDNS, both by Cisco for $1.4B and $635M, respectively, along with the acquisitions of MedExpress, Xoom, and Stemcentrx.

In the first half of 2016, Sequoia’s deal pace for new and follow-on deals is down nearly 21% compared the same period last year. Peeling back the venture firm’s disclosed new investments reveals that Sequoia has completed 60% fewer first-time investments in a company in H1 2016 compared to H1 2015.

“Over short time frames, investment activity goes up and down. But in aggregate, over longer periods, we invest at a consistent pace.”

“And entrepreneurs frequently have to make decisions in short time periods rather than long ones. So it’s very important for them to have a realistic sense of the funding environment and be pragmatic about financing opportunities.”

Below are some of Sequoia’s most recent new financings that highlight some of their early and growth-stage investments in the last year.

Below is a graph of Sequoia’s monthly investment activity (deals and funding participation) over time taken from their profile on CB Insights. The spike in May can be attributed to Sequoia’s participation in Snapchat’s $1B+ Series F financing.

Since the start of 2015, Sequoia has realized 21 exits including 4 IPOs and 17 acquisitions.

Here are some of Sequoia’s notable recent exits:

The scatterplot below highlights Sequoia’s exits over time (those with disclosed valuations).

Here is the activity of some of Sequoia’s notable partners.

Jim Goetz was responsible for the backing of WhatsApp and its acquisition by Facebook for $22B. Specializing in mobile and enterprise software companies, he also sits on the boards of three public companies he brought to IPO in the last three years: Palo Alto Networks, Barracuda Networks, and Nimble Storage. Goetz’s board portfolio also includes gaming company Pocket Gems, game-maker support platform Chartboost, and ad tech company Drawbridge. Additionally, he sits on the board of Yik Yak, Carbon3D and Github among others.

Doug Leone leads day to day operations at Sequoia and has been at the firm since 1988, joining Sequoia after working at Sun Microsystems, Hewlett-Packard and Prime Computer. Leone today works with Sequoia companies including PlanGrid, Medallia, and Nubank.

Alfred Lin helped Zappos develop from a small startup to its $1.2B acquisition by Amazon in 2006, before joining Sequoia. He invests primarily in consumer internet, enterprise, and mobile companies. He represents Sequoia on the board of Airbnb, where Sequoia was the first institutional investor at the seed round and has invested in every round including the last a a $25.5B valuation. Lin sits on the boards of AirBnB, DoorDash, Stella and Dot and Houzz, among other companies.

Roelof Botha joined Sequoia after helping steer PayPal through its IPO and acquisition by eBay. At Sequoia, he most notably led the initial financing of YouTube in 2005 as well as their investments in Instagram and Tumblr. Botha also sits on the boards of Natera, Square, Evernote, MongoDB, Unity Technologies and Eventbrite among others.

Bryan Schreier joined Sequoia from Google where he served as senior director of international online sales and operations. At Sequoia, Schreier sits on the boards of three startups valued at $1B+ in the private markets including Qualtrics, Thumbtack, and Dropbox and also sits on the boards of Clever, Hearsay Social and TuneIn among other companies.

“To some extent, we’re between cycles. While the best days for mobile have yet to come, many of the new business models have been developed, and the category kings crowned. The next cycle is likely to be defined by a shift in UI – most likely to conversational interfaces, AR or VR, and a shift in infrastructure – most likely to AI.

These technologies are entering the hype cycle but have yet to produce transformative business models that deliver step function improvements in customer value. That will change soon.”

Two areas where Sequoia has made first-time investments in companies are construction and geospatial imaging. Sequoia led an $18M Series A investment into construction-planning app PlanGrid. Funding to the construction tech market jumped 5X in 2015. Sequoia also led a $8.7M Series A into geospatial big data company Orbital Insight (which recently raised $20M in Series B funding led by GV). At the Series B and C stages, Sequoia made new investments in health insurance (led Clover Health’s Series B) as well as developer tools (led GitHub‘s $250M Series B) and HR tech (led Namely‘s $45M Series C).

“We’ve been investing in healthcare for many years, mainly in HCIT/services and diagnostics. More recently, we’ve partnered with companies in insurance (Clover) and life sciences (Berkeley Lights, Cambridge Epigenetics, Guardant, Stemcentrx). We’re excited about Clover because we believe technology will be the key enabler of better outcomes for patients. In life sciences, we’ve followed the advances in genetics over the last 10-15 years and believe that the number of interesting applications (like gene editing and liquid biopsies), and their eventual impact on human health, is just beginning.”

The chart below highlights Sequoia’s recent new deals (Note: follow-on deals during the period not shown on the chart below).

One prominent area of venture where Sequoia has been less active is fintech. At CB Insights Future of Fintech Conference, Sequoia partner Pat Grady said, “We’ve been very quiet in fintech in the last few years. We’ve met a whole lot of companies, we have not made a whole lot of investments. We plan to be very active in fintech in the next three years.” And according to the data, Sequoia has indeed made very few new fintech bets in recent years.

“We see huge opportunities in fintech, partly because of our close partnerships with Klarna, Prosper, Square and Stripe. Insurance is an emerging area of interest, but overall fintech is over-invested right now. Our focus is on big, new ideas, which are few and far between.”

As the data below highlights, Sequioa has made just 4 Series A investments in fintech since the start of 2011 including payments processor Stripe valued today at $5B, robo-advisor FutureAdvisor (acquired by BlackRock for between $150M and $200M), marketplace lender Prosper, and Brazilian digital banking startup Nubank. 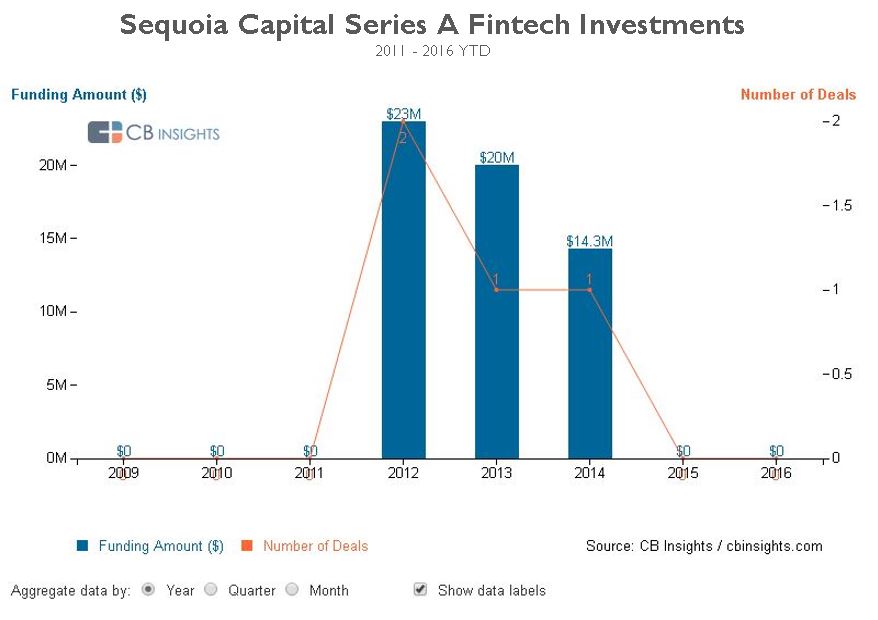 As expected, California receives the vast majority of Sequoia’s deals in the US. What is more interesting is the distribution of funding outside of California. After participating in four New York-based deals in Q4’13 through Q4’14, Sequoia has participated in six New York deals in the last five quarters, including deals to HR software startup Namely, marketing software firm Percolate, and security ratings startup Security Scorecard.

“For early stage investments, we focus on the Bay Area and to a lesser extent LA. We’ve found it hugely helpful to be close to our companies, so that we can offer a high level of support (frequent visits, recruiting from our local network, etc.).”

The geography heatmap for the US shows distribution of financings by geography for Q4’13-Q4’14 on the left and Q1’15-Q1’16 on the right. The size of the box represents the number of deals and the darkness of the blue represents total funding amount from the deals that Sequoia participated in. 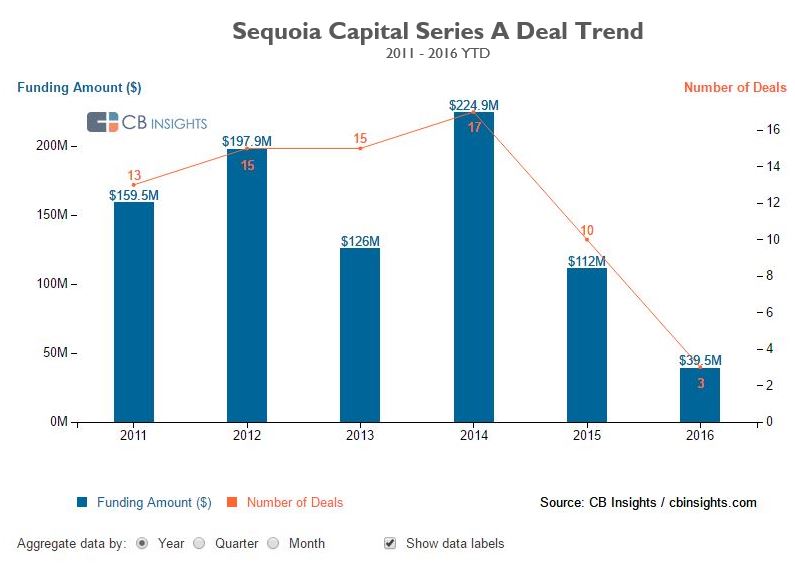 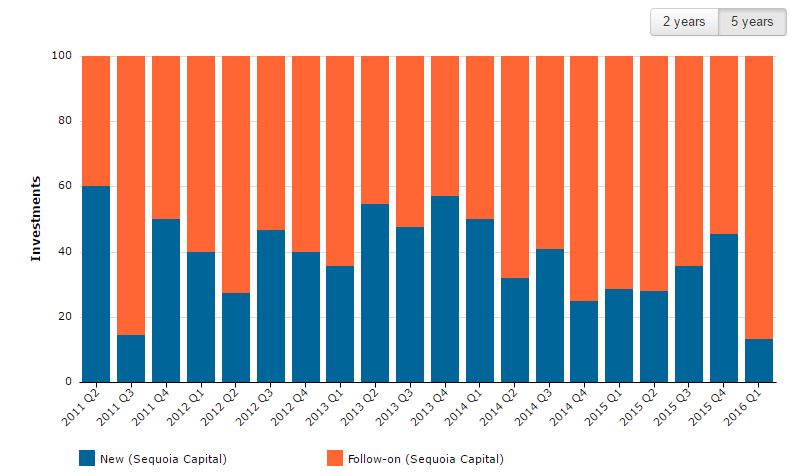 Sequoia most often looks to Y Combinator companies for dealflow as the Investment Syndicate dashboard below illustrates. In fact, Sequoia is an investor in 8 of Y Combinator’s top 10 most valuable alumni as of last summer.

Also among the top feeders are SV Angel as well as onetime micro-VCs SoftTech VC and Felicis Ventures, both of which raised $150M+ funds in 2016 and invested prior to Sequoia in companies including education API Clever, retention marketing startup Thanx, and website builder Weebly.

“Another important partner is our Scouts program, which has helped lead us to Clever, Guardant Health, and Thumbtack among others. Founders and executives in our community often mentor aspiring entrepreneurs, and the Scout program gives them the means to invest in the startups they’re supporting. Scouts offer great advice – and a great way to connect with us via their introductions.”

Below is our Investment Syndicate dashboard for Sequoia Capital which highlights and ranks top dealflow sources and coinvestors. 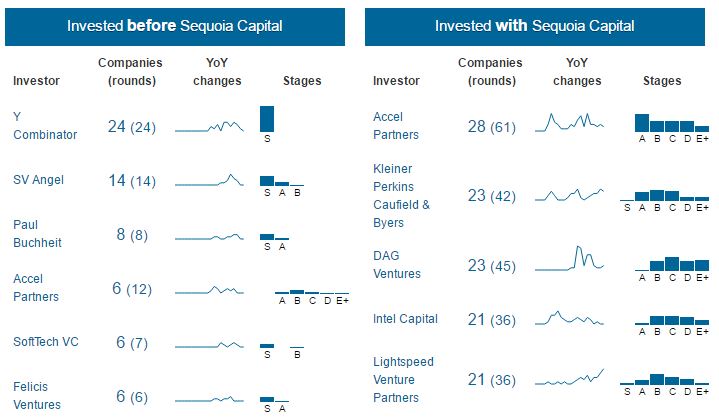