WhatsApp netted Sequoia Capital billions when Facebook acquired the mobile messaging app for $19B. What made WhatsApp particularly unique was that Sequoia was the sole institutional investor – something which is rare among VC-backed companies. This week, Sequoia made a $50M bet into customer listening / voice-of-customer platform Medallia. Once again, Sequoia remains the sole institutional investor in the company having funded all the company’s rounds to the tune of over $100 million.

So we wondered who else is Sequoia going all in on?

According to CB Insights data, there are at least 10 unexited startups that have raised a round of capital since 2009 and disclose the prominent Sand Hill Rd. firm as their sole institutional investor to-date. While Sequoia often does early stage deals in which it is the sole investor in the round, it’s common for other VCs, corporates, etc to participate in subsequent rounds. As an example, mobile sales productivity startup Clari announced $6M in a sole investor Series A deal from Sequoia only to later close a $20M Series B from Bain Capital Ventures, Northgate Capital and Sequoia in June 2014.

The firms below represent Sequoia’s “WhatsApp-like” investments in which Sequoia is the sole backer. Sequoia’s go-it-alone companies are generally less high-profile and include firms like software-defined networking startups VipTela and Versa Networks as well as Blue Danube Labs, a wireless communications systems startup.

Outside of Medallia, Sequoia-only companies that have raised funding this year include IoT startups Lifx (which was previously Kickstarter-backed) and home security firm Simplisafe. Eight of the firms are California-based. Of course, given several of the startups are still early-stage, some may go on to raise from additional investors beyond Sequoia in the future. 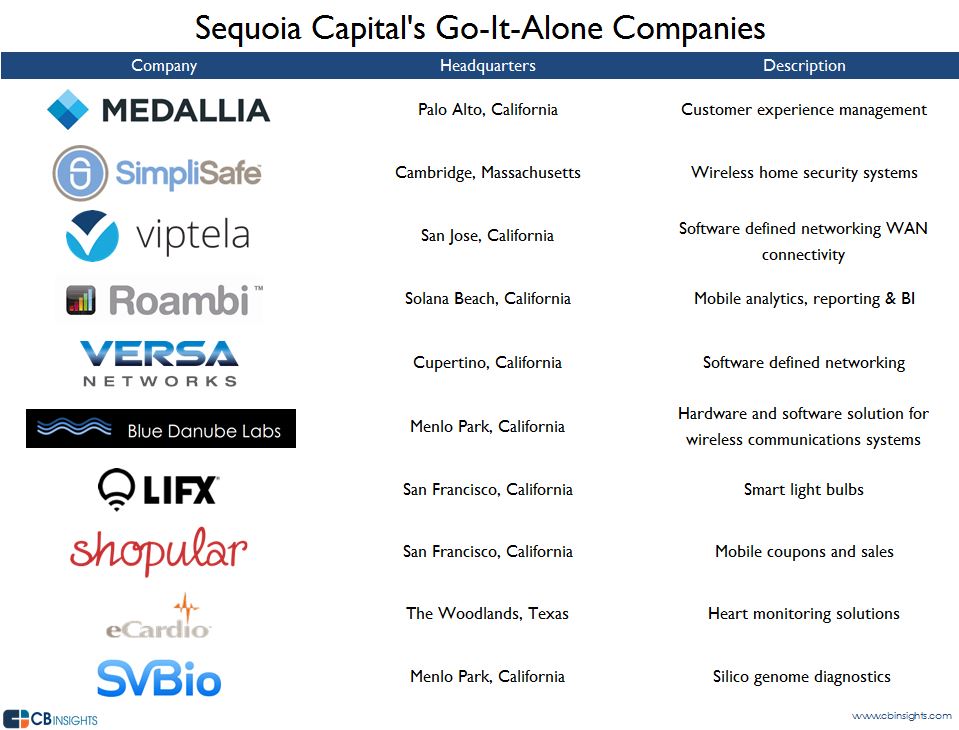 See all of Sequoia Capital’s exit and financing activity in the CB Insights Venture Capital Database. Sign up free below.