Research Brief
1101
With a new $530M fund to invest in Asia, we analyzed Sequoia Capital's tech investments over the past 4 years which point to an increased focus in India.

Over the past two years Sequoia has stepped up its investments in both India and Israel while becoming relatively less active in China. From 2012-2013 India and China made up a combined 74% of deals out of Asia versus 83% in 2010-2011, while Israel grew from 15% to 20% deal share in the same time period.

From 2012-2013, the largest investments out of India were a June 2012 $57M Series E in local search engine Just Dial and the previously-mentioned $37M Series D investment in Zomato Media, an online food and lifestyle portal.

The 2010-2011 deal volume was dominated by China, with a 54% deal share. Notable deals in this time period were Series C investments in group-buying website Dianping ($100M) and lifestyle network Ganji.com ($70M). 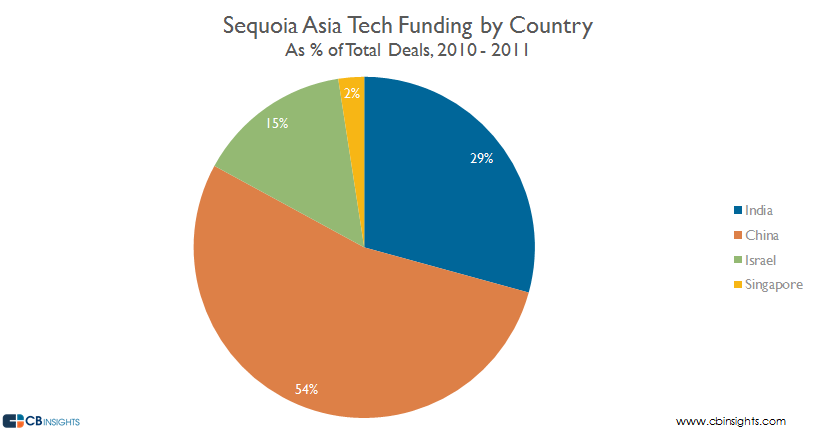 Was Sequoia ahead of the curve in Asia eCommerce?

Over the past two years Mobile Software & Services companies made up 33% of Sequoia’s Asian tech investments. This marks a material shift to the mobile sector versus 2010-11 when mobile was only 15% of share. Sequoia, as previously detailed, has shown a deft touch investing in many of mobile’s big potential winners.

In 2010-2011, eCommerce led with 41% of all investments. That said, with the internationalization of Internet eCommerce in recent years, it does look like Sequoia was, perhaps not surprisingly, at the forefront of this trend. Notable eCommerce follow-on investments (from 2010-2011 rounds) in 2014 include Jiuxian.com, fashionandyou.com, and the previously mentioned Meituan, could suggest continued interest in the space. As eCommerce in India continues to heat up with India-based Flipkart raising $1B and Amazon investing $2B in its India marketplace and technology adoption more generally gains steam in Asia, it will be useful to see the bets that one of Silicon Valley’s most prescient firms makes in the market. 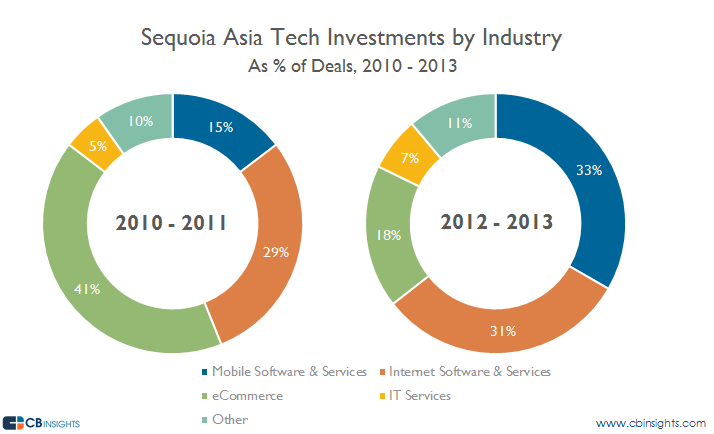 To track private company financing and M&A data for Asia as well as Sequoia Capital’s investment activity, create a free account to the CB Insights venture capital database below.

Note: There is uncertainty surrounding Sequoia’s involvement in 360buy.com/JingDong. Due to the large round size speculated, we have excluded them from all funding data.