Research Brief
1580
With a number of micro VCs and larger VC funds getting active in seed investments, VC funding at the seed-stage hit another high in 2014 coming in at $1.33B.
Get the free 110-page 2014 U.S. Venture Capital Year in Review

Seed venture capital funding soared to new heights and hit another multi-year high in 2014, according to CB Insights data.

Over the 12-month period, 2014 saw $1.33B deployed across 976 seed VC deals. 2014 saw the highest number of seed VC deals since 2009 at 976, as well as 4 of the 5 most active quarters since 2011. While seed VC deal activity in 2014 jumped 16% versus 2013, quarterly seed VC deal activity leveled out after jumping in Q1’14 staying between 240 and 250 deals. To ensure consistency with last year’s report, seed venture capital deals included in this brief are early stage investments that specifically include the participation of a venture capital and/or corporate venture capital firm (angel and accelerator rounds are tracked on CB Insights but were excluded from this analysis).

The five-year seed VC deal trend is highlighted below. 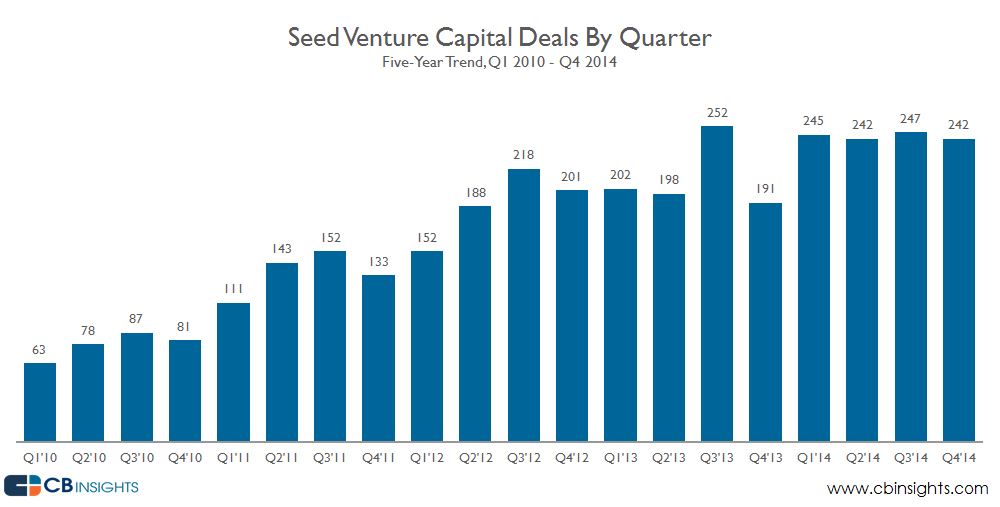 2014 saw a record $1.33B deployed in seed VC deals with funding increasing for the last four quarters. Overall seed VC funding was up 49% in 2014 versus 2013, hitting a quarterly high of $390M in Q4’14 behind some sizable deals including Navdy, LuxeValet and Avaamo. 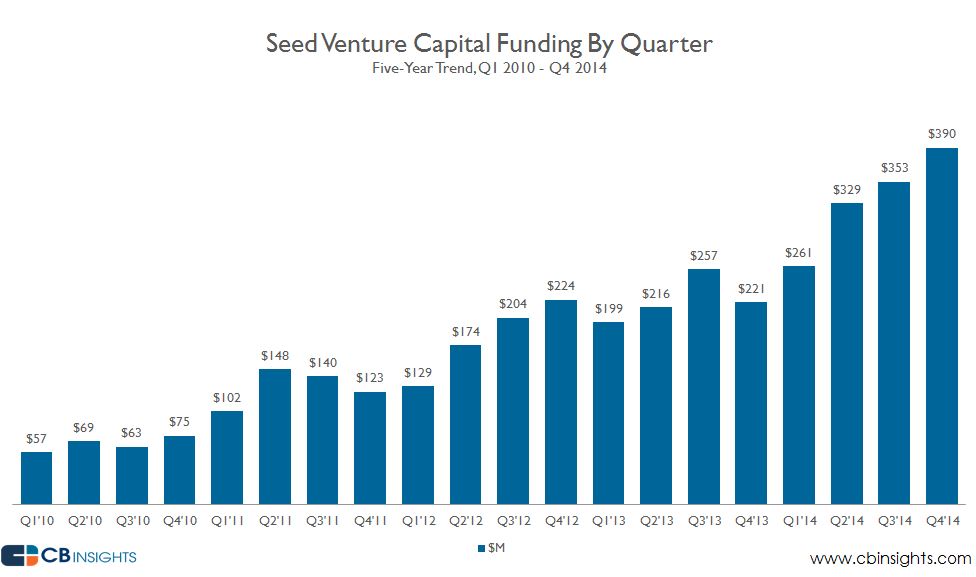 In addition, seed VC deal sizes continued their steady increase with a sharp uptick in Q4 2014. Notably, average and median seed deal sizes were on the upswing in 2014 and hit their highest levels in four years of $1.9M and $1.7M, respectively, in Q4 2014. This comes as the number of active seed investors jumped to a new high in 2014, spurred by both a growing number of micro VC funds but as well as mega funds including Google Ventures, Andreessen Horowitz and NEA.

All of the seed VC data in this report is available on the CB Insights Venture Capital Database. Sign up free below.