As we’ve highlighted before, seed deals are getting bigger and the large Series A is becoming more common. And based on the data, raising a larger seed round leads to a larger Series A round.

We analyzed the 894 VC-backed US tech companies that raised both a Seed round and a Series A round between 2010 and 2014. We sub-categorized the round sizes as follows: 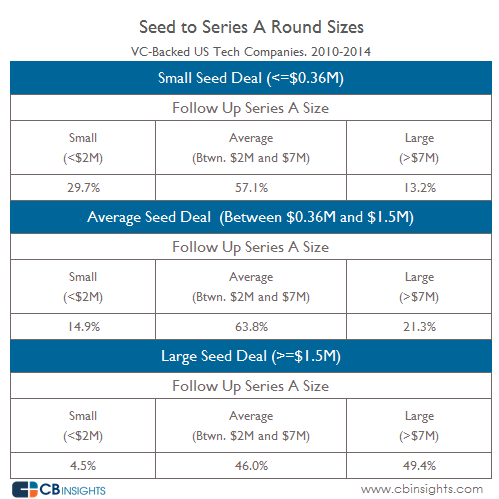 According to the data, nearly half of all large seed deals become large Series A deals, even larger than the number of deals that go from large seeds to average Series A. A small number of companies that raised large seeds ended up raising small Series A rounds, including Manzama and RiskPulse. For companies that raised small Seed rounds, 57% went on to raise an average Series A round, and only 13% raising rounds of $7M+ such as Misfit Wearables and Teespring.