Research Brief
807
Google Ventures, Verizon Ventures, Bloomberg Beta, Microsoft Ventures and 30 other corporate venture arms invested in a seed round in 2013. The early stage is no longer just for VCs and angels.

With the VC asset class shrinking, corporate venture capital arms are doing a lot “more” these days. More participation in the largest venture capital-backed financings, more IPOs and, as it turns out, perhaps surprisingly, more seed VC activity. Corporate VCs are not just investing in the mid- to late-stages any more.

In 2014, 54 different corporate venture arms participated in at least one U.S. seed VC round from Intel Capital and Verizon Ventures to just recently formed CVCs like Bloomberg Beta and Microsoft Ventures. The number of corporate venture arms now participating at the seed stage is up significantly over recent years. Of note, corporate VCs doing seed deals jumped 240% in 2013 versus 2010. 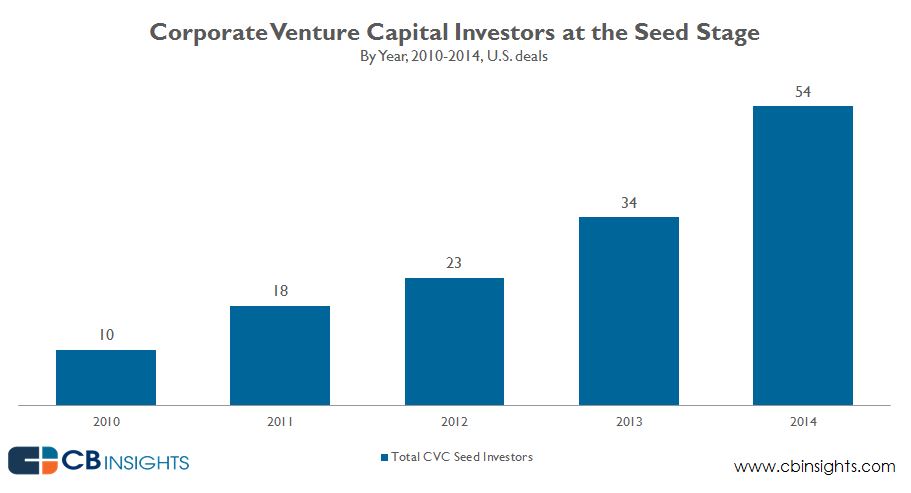 Over the past eight quarters, Google Ventures has been far and away the most prolific CVC at the seed stage completing more than six times as many seed deals as the second and third most active seed CVCs, Qualcomm Ventures and Intel Capital, respectively. In fact, Google Ventures is among the top seed investors across the entire venture capital ecosystem participating in the fourth highest amount of seed VC deals of any venture capital investor behind SV Angel in 2013.

For more corporate venture capital financing data and interactive rankings, check out the CB Insights Venture Capital Database. Sign up for free below.